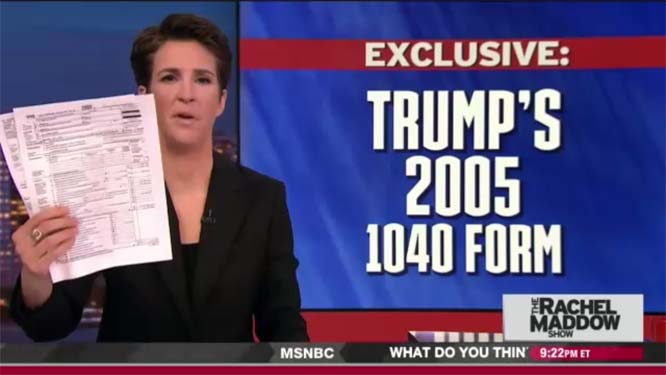 When news broke Tuesday night that MSNBC's Rachel Maddow planned to release some of President Donald Trump's previously unseen tax returns, the administration wasted little time in replying. Maddow tweeted about the upcoming story at 7:36 p.m., and by 8:23 p.m., the White House was dismissing the story in a statement. After outlining how much was paid and how much income Trump earned, the statement went on to bash the media's handling: "Despite this substantial income figure and tax paid, it is totally illegal to steal and publish tax returns."

All of this half an hour before the segment aired.

When the segment did air, the journalist who'd received the documents offered an interesting theory: Perhaps Trump himself had leaked the returns.

"Came in the mail, over the transom," David Cay Johnston told Maddow, when asked how he obtained the file. "And, by the way, let me point out it's entirely possible Donald sent this to me. Donald Trump has over the years leaked all sorts of things. . . . The front pages of the state tax returns we had that were sent to the New York Times and the New York Daily News last fall may have come from Donald. Donald has a long history of leaking material about himself when he thinks it's in his interests."

Johnston went on to say that he thought this was only a possibility, but the idea quickly caught fire online.

One detail in the returns jumped out at people as being particularly significant. On the second page, in lieu of a signature from Trump, the document was stamped "Client Copy" - suggesting to many that this was a document that could have come only from within Trump Tower.

Before we dig into that, though, let's discuss what else we know about where the returns came from.

On his website, Johnston explains the top-line details. The document was mailed to him anonymously, through the U.S. mail. Two addresses are readily available for him online, one his personal address in Rochester, N.Y., and the other a post office box in that city. (It's not clear which address received the file; an email to Johnston was not returned. An emailer notes that the encoded pattern under the address reveals that the letter was sent to Johnston's home.) That Johnston would be chosen for a leak isn't a surprise, given that he has written about Trump's taxes regularly - and even wrote a book about the president.

Johnston gave a few more details during an appearance on ABC's "Good Morning America," including that there was no return address on the envelope. (The file received by the Times to which Johnston referred on Maddow's show had the return address of Trump Tower.) An image of the envelope was released Wednesday morning, showing a postmark of Westchester, New York - an affluent suburb of New York City - on March 9.

He also said he didn't think it was likely that Trump leaked them himself, given how angry the White House's response was. And, perhaps, how personal; the Times's Maggie Haberman pointed out that the use of "totally" in the White House statement is very much a hallmark of a Trump comment. Johnston also pointed out on ABC that Trump doesn't like him much, making it less likely that Trump would single him out for this attention.

Let's turn back to that "client copy" stamp. Steven Goldburd, a tax lawyer in New York, explained over the phone what that stamp might mean. Certainly, as Johnston said on ABC, it could mean that it came from someone "who either worked at the accounting firm or had connections to it" - but that's hardly the only possible source.

"Anything that is coming from an accountant would be stamped with 'client copy,'" Goldburd said. "The question is more: So who else has copies of his returns other than just his accountant and Mr. Trump?"

One possibility? "Anytime Donald went for a mortgage - especially if it was a personal mortgage of any sort," he said, "any type of loan would have required him to disclose his tax returns to the banks. So any bank that he has dealt with in the past would theoretically have a copy of this return."

We do have some data on Trump's finances because of the personal financial disclosures he has filed in accordance with federal law. In his 2016 filing, there's an example of the sort of loan to which Goldburd was referring. At some point in 2006, Trump took out a mortgage loan from UBS Real Estate Investments in the range of $5 million to $25 million.

(For what it's worth, more than two dozen UBS employees in New York state gave money to Hillary Clinton's 2016 presidential campaign, most of them based in the New York City area.)

If the loan came in the latter part of 2006, the 2005 return would have been the most recent available to be submitted to the bank. This isn't the only possible loan, of course. It's listed on his PFD because the loan matured in 2016. Loans that matured on a shorter time frame (and therefore may have been repaid) wouldn't be listed. What's more, Goldburd notes, the 2005 returns could have been submitted as part of other loan applications, if Trump took out a loan in early 2007, for example (before his 2006 filing was complete) or if a bank wanted multiple years of returns.

That the return is from 2005, before the mortgage crisis and the recession, may be why only two pages were available. "Today they ask for all schedules," Goldburd said, meaning that the bank probably would ask for a more complete return. Before the crash, "the rules were a little bit more relaxed."

The other possibility for the source of the returns mentioned by Johnston and others is litigation. If Trump had been asked to disclose his returns as part of a lawsuit, he may have turned over similarly stamped documents. Michael Bond of Gabor Tax Law Associates in New York explained that such documents may or may not have been Bates-stamped, the coding that's applied by courts to documents in legal proceedings.

Sometimes, he said, lawyers send copies directly to opposing counsel without passing through the court first.

On balance, in other words, there is a higher likelihood that someone who obtained Trump's tax return in some way passed it to Johnston than Trump did himself.

Bringing us back to the point Trump made in his comment: While Maddow and Johnston won't face legal risk for publishing the documents, the leaker might.

If it came from a bank, Goldburd said, "there are major bank secrecy rules that are being broken here." That's one reason that a Trump-backed leak may have seemed more likely: He had the documents and bore no risk for releasing them.

Overlay that with the nation's renewed love of conspiracy theories, and you've got yourself an irresistible - if loosely founded - rumor.