The contradiction - and challenge - of the Trump presidency 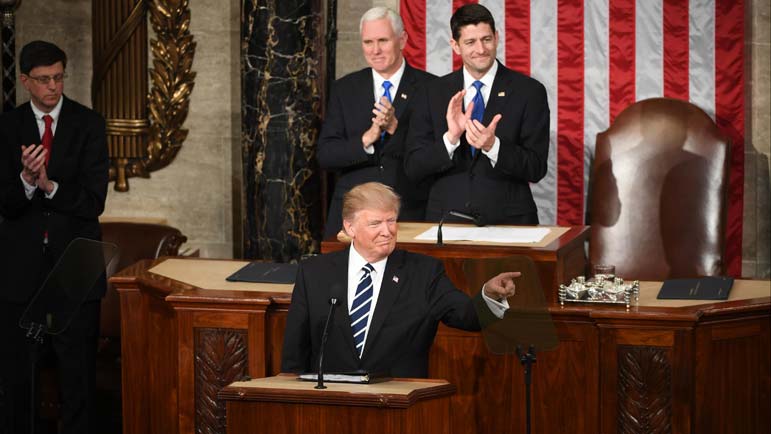 In his inaugural address, Trump spoke of American carnage and as the tribune of the forgotten American. To the assembled members of Congress seated behind him that January day, he offered a rebuke and the back of his hand. On Tuesday, he made repeated appeals for national unity and cross-party cooperation. Looking out across the House chamber, he seemed to offer an open hand to the same political establishment he had pilloried just weeks ago.

Trump as president must attempt a perpetual juggling act, at once capitalizing on public insecurities and stoking anti-establishment anger among those who helped carry him to the White House while sounding some broader notes of optimism and playing nice with establishment Republicans, who he needs to help enact his agenda. It is no longer a question of which is the real Donald Trump but more the question of whether he can build a successful presidency out of this split political personality.

The opening weeks of the administration have put on vivid display the tensions within his presidency and potential strains within the Trump and GOP coalitions. At times, as he did at last week's Conservative Political Action Conference, the president channels the worldview of White House chief strategist Stephen Bannon, the nationalist firebrand who seeks permanent warfare against the established order. At other times, as on Tuesday night, he is a mostly (though never entirely) conventional Republican, embracing the worldview of House Speaker Paul Ryan of Wisconsin, who keeps alive the flame of traditional conservatism.

Trump remains the master of constant action, of both strategic diversions and politically damaging digressions. His days have been filled with gatherings at the White House, crowded photo opportunities in the Oval Office, tweets and interviews and pronouncements, all to project a sense of forward motion and promises kept. He has signed multiple executive orders. He has given a series of campaign-style speeches. He has stoked the emotions of Trump Nation with an us-vs.-them style of leadership. He has carried on his war with the media.

Still. Executive orders have pointed to a new direction, but they are limited in what they can accomplish. The campaign-style speeches are just that, a litany of familiar promises. The president set the tone and dominated Washington, and he gives himself an "A" grade for what he has accomplished. What he has not done is what Republican elected officials want him to do, which is to put flesh on the bones of his campaign promises, set a clear order for his priorities and make some of the difficult choices about those devilish details.

That's proving difficult. The president stunned the nation's governors Monday when he declared that "Nobody knew health care could be so complicated." Nobody, perhaps, other than those who have looked seriously at what it took President Barack Obama to enact the Affordable Care Act or anyone who has looked seriously at what it would take to replace it with a conservative alternative.

Trump has repeatedly promised to produce a health-care plan soon. On Tuesday night, the principles he outlined mostly echoed those that Republican leaders have enunciated for replacing Obamacare. But that blueprint for reform splits congressional Republicans and also divides Republican governors. Will congressional Republicans expect Trump to find a consensus path forward, or will he turn over the responsibility to them? That will be a test of leadership.

Another major priority, for Trump and certainly for congressional Republicans, is tax reform. Candidate Trump had more than one plan. Sixteen years ago, when then-president George W. Bush spoke to a joint session of Congress at a similar moment, he talked about the details of his tax cut plan. President Trump has yet to explain what his would look like, particularly whether he supports a border adjustment tax, and Tuesday's speech did nothing to answer those questions.

Trump has moved quickly on immigration. He ordered the construction of a wall along the U.S.-Mexican border and to deport some of the estimated 11 million undocumented immigrants, focusing first on those who have committed crimes. His actions are deeply controversial among his opponents but enthusiastically supported by his base.

On Tuesday, he suddenly veered in a different direction, saying that real immigration reform is now possible. "If we are guided by the well-being of American citizens, "Trump said, "then I believe Republicans and Democrats can work together to achieve an outcome that has eluded our country for decades."

Comprehensive immigration reform, which has included either a path to citizenship or legal status for those here illegally, has ruptured the Republican base for years. A path to legalization would meet stiff resistance from many of Trump's most loyal supporters, unless loyalty trumps ideology. Trump ran as a hard-liner. His sudden change of course and tone is a reminder of his unpredictability. It also raises the question of whether he will seriously pursue another complex and contentious legislative battle any time soon.

The president's agenda is nothing if not ambitious. Again, on Tuesday, he spoke about a big infrastructure initiative. He is a builder after all. Such a plan would be a key element of a jobs agenda, something he says is a priority. So it is a costly priority and he offered no timetable for bringing it forward.

Republicans who disagree with the president on trade or entitlement reform nonetheless see him as their great hope for a dramatic reversal from the Obama years. He has made a down payment in cementing support from establishment Republicans with his nomination of federal appeals court Judge Neil Gorsuch to the Supreme Court. It takes little more than a look back at the speech Obama gave eight years ago under similar circumstances to understand why those GOP leaders see the potential for a significant redirection for the country during his presidency.

Tuesday's address was described in advance as a moment for Trump to reset his presidency after an opening that included controversies, missteps and internal turmoil. In tone, he succeeded in offering an alternative to what many saw as the harshness of his inaugural address. In substance, much was familiar - the speech went only a few steps beyond where he has been before. Now comes the less glamorous work of governing and finding the balance between Inauguration Day and Tuesday night.