George W. Bush gives lesson in laughing at ourselves 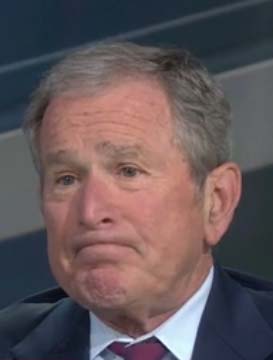 I must admit, a decade ago, I did not think that would teach us something about wisdom.

Bush, at the time, was in his seventh year as president. His patriotic glow from 9/11 was waning. His approval ratings were in the low 30s. He was under fire from the media, from , from businesspeople and from average citizens frustrated by a sinking economy and weary, as Americans tend to get, of the perceived idiosyncrasies of a second-term POTUS.

In Bush's case, it was a lack of high-brow insight, a willingness to let Vice President handle things and a tendency to botch the English language.

Late-night TV hosts had a field day with Bush (just as they are having now with President Trump). And "," currently enjoying lofty ratings thanks to its Trump skits, used to regularly take apart.

, one of big stars, did a biting parody of Bush as a good ol' Daddy's boy, more interested in working out than world affairs.

It was the kind of portrayal a man could take personally. After all, here's a comic making fun of your accent, your language, your intelligence -- and getting big laughs for it.

Ferrell even managed to create a one-man play called "You're Welcome America: A Final Night with ." It sold out on , was shown on and was turned into a DVD.

You'd think the real Bush would be upset.

Instead, here was the former President last week, on late-night TV, making the rounds for a new book of portraits he'd painted. The fact that took up painting after leaving the , a hobby he'd never tried before, and got very good at it, should tip the hand that many of us underestimated him.

But when asked Bush if he ever got upset about Ferrell's jabbing imitation, he quickly said, "No."

He even told a story about playfully arguing with , the longtime producer of , over who invented certain botched Bush terms like "strategery" and "misunderestimate," joking over who should get the credit.

Kimmel asked if the parodies ever bothered him. "No."

He asked if Bush watched much TV as president. "No."

He asked if he enjoyed the White House Correspondents' dinner, where the press and the President poke fun at each other.

Kimmel laughed. "Tell that to the president."

A PRESIDENT NOT UNDERSTANDING HUMOR

When you compare Bush's genteel approach to criticism to scorched earth policy, you find yourself pining for the 2000s. This is not about Trump's politics (so you can stop typing the knee-jerk liberal-conservative warfare comments). This is simply about the ability to laugh at yourself.

Trump seems to view that trait as weakness. Instead of not watching TV, he apparently watches it incessantly. Instead of rolling with parody punches, he fires back. Instead of finding impressions funny or harmless, he tweets about how awful they are, and how the TV shows that parody him are dying in the ratings (which is often not true).

And Trump recently announced that he would not be attending the White House Correspondents' dinner. It didn't surprise anyone. Self-deprecation, a cornerstone of that event, does not seem to be something Trump practices very much.

Now, no one likes to be criticized or parodied. But in a highly public position -- and what is more highly public than the presidency? -- it clearly comes with the job.

Yes, critics are can be harsh, even cruel. Especially with the anonymity granted them by the . Today's world is meaner, and the country is terribly divided.

But it was terribly divided over the 2000 election results, and over the Iraq War, both under the Bush presidency.

And if you think comics skewer Trump far worse than they did "George W," you have a short memory. It just feels that way, because Trump takes things so personally. He responds to so many insults. He mocks back. He even blamed the recent Oscars snafu on the show being too obsessed with criticizing him.

It's a good attitude to have in these thin-skinned, insult-hurling days. And probably a healthy one. After all, what escalates a fight often isn't the first swing, but the swing back.