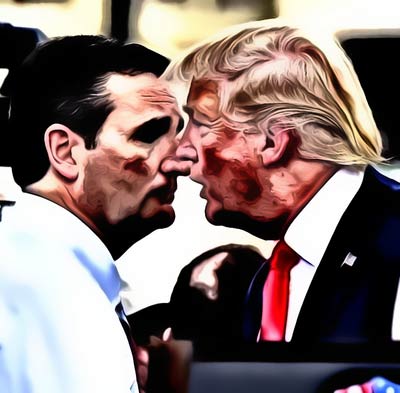 YOUNGSTOWN, Ohio --- The political press has hunkered down in Cleveland and in Miami, asking whether Gov. John Kasich, R-Ohio, or Sen. Marco Rubio, R-Fla., can overwhelm Donald Trump in their own states and start playing toward a brokered convention. Sen. Ted Cruz, R-Texas, flew into Columbus Sunday night to pound his own closing message of "Super Tuesday II" - a vote for anyone else will be wasted.

"They said, Ted Cruz, don't come to Ohio," he told an audience at the Northland Performing Arts Center, 10 miles from the airport where he'd landed from North Carolina and would soon take off for Illinois. "We've decided in the media we're giving it to Donald Trump or John Kasich."

Cruz, who has been boxed out of some news cycles by the media's focus on Trump, is looking to set low expectations, then blow past them. The do-or-die nature of the Ohio/Florida primaries has vacuumed up attention, and Mitt Romney's planned rallies with Kasich Monday are likely to do it again.

But Cruz is looking to strong performances in Illinois, Missouri and North Carolina, the lightly polled megastates lost in recent coverage, to cut any delegate lead Trump might build Tuesday. The first two states border the parts of Iowa that gave Cruz his first victory.

Missouri, home to Cruz's campaign manager Jeff Roe, has 52 delegates at stake but has been polled just once this year. A Fort Hays State University poll released last week put Trump at 36 percent, Cruz at 29 percent, and both Kasich and Rubio in single digits - with twice as many voters undecided as backing either of them. While Trump ran 20 points ahead of Cruz in Arkansas' section of the Ozarks, the rural area shared with Missouri, Roe has won elections before in central Missouri and the conservative suburbs of St. Louis and Kansas City.

There's also promise for Cruz in Illinois, where the impact of Friday night's canceled Trump rally at the University of Illinois at Chicago has been hard to discern. Trump's leads there have been in the high single digits, and a weekend poll by CBS News/YouGov put Trump just four points ahead of Cruz. But Illinois selects delegates based on whoever wins each of its 18 congressional districts, not on who wins statewide. Cruz is making five stops in that state Monday, each in a different district, with no downside. A popular vote win would give him a major "upset" headline, his first in a primary outside of Idaho, Oklahoma and Texas. A narrow loss, but wins in several districts, would eat into Trump's delegate lead.

But Ohio came first, and demonstrated just how Cruz is telling voters that they should hurry past Kasich and Rubio to create a Cruz-Trump primary. Cruz begins each news conference with a two-minute statement, repeating the electability message he will make onstage. In Columbus, he said twice that he had defeated Trump "not once, not twice, not three times, but nine different times, literally from Alaska to Maine." Onstage, he said it again.

"You notice that Donald sort of twitches when I say that?" he asked his crowd. "Come on say, it nine! Nine! Ask a German: Are you going to be the nominee? Nein!"

Cruz lists the contests where he has bested Trump because to name how he beat him would be less impressive. He defeated Trump outright in the Idaho, Oklahoma and Texas primaries - the former a true upset that raised questions about whether Trump could win "closed" primaries that prevented independents from crossing over. (He went on to win several.) He clobbered Trump in the Iowa, Alaska, Maine and Kansas caucuses, then beat him in Saturday's convoluted Wyoming convention.

"We won the Wyoming caucuses with 66 percent of the vote," Cruz said at the news conference and the Columbus rally.

The ninth win was not an outright victory. It was Cruz's second place showing in the March 1 Minnesota caucuses, where he nonetheless ran ahead of Trump. Cruz has run disappointingly even with Trump in the territorial contests where a handful of votes can matter, watching Guam and the Virgin Islands elect uncommitted delegates. And all of that is happening in the context of Cruz losing every contest so far in the deep South, where his initial plans assumed he could build a delegate lead over any "establishment lane" candidate.

In Ohio, Cruz told voters they could reject the "stop Trump" campaign that demanded a vote for Kasich and instead give him a victory that would stop Trump before the Republican National Convention. This was undeniably true - a Cruz win in Ohio would blow up delegate projections. Cruz's only evidence that it was possible was a CBS News/YouGov poll that had him six points behind Trump and Kasich, a poll that he said the media was ignoring.

"The corporate bosses have said Donald's gotta be the guy because he's the only one who can't beat Hillary," Cruz said from the stage. Asking each member of the 1,500-person audience to pull 10 friends to the polls, Cruz said that "the people in this room control 15,000 votes, enough to swing the outcome in Ohio."

An average of Ohio polls gives Kasich a 2.7 point lead over Donald Trump; in that average, Cruz trails Trump by 13 points, rising since Ben Carson quit the race. The only national analyst currently musing about a Cruz upset is the Washington Examiner's Tim Carney, who asked whether the Cruz uptick represents soft Trump supporters bailing on the front-runner.

Cruz, meanwhile, has found a way to spin his defeats. In Columbus, he earned cheers when he rattled off the Wyoming vote totals, then more cheers when he admitted winning no delegates in that same day's D.C. convention, where less than 3,000 had voted and given Rubio 10 delegates to nine for Kasich.

"The District of Columbia voted and I came in dead last," he said. "The Washington lobbyists looked at this field and said goodness gracious, give us anybody but Cruz!"