We need answers to these unasked Hillary questions 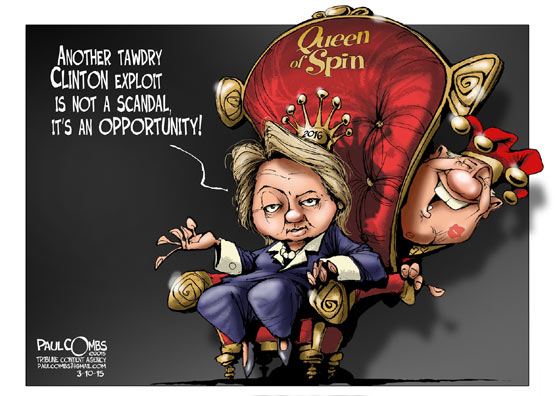 What if Hillary Clinton's emails were hacked by foreign agents when she was the secretary of state? What if persons claiming to have done so are boasting about their alleged feats on Internet websites and in chat rooms traditionally associated with illegal or undercover activities? What if this is the sore underbelly of an arrogant and lawless secretary of state who used her power to exempt herself from laws that govern executive branch employees and didn't care about national security?

What if the law required Mrs. Clinton to swear under oath on her first day as secretary of state that she would comply with all laws governing the use of federal records? What if the principal governing law — the Federal Records Act of 1950 — makes it clear that when you work for the feds all the records you receive and generate belong to the government and you cannot lawfully conceal them from the government?

What if she refused to sign such a promise because she knew she'd be violating that law?

What if the State Department has an inspector general whose job it is to assure the public and the attorney general that the secretary of state is complying with federal law? What if agents of the inspector general signed documents swearing that Mrs. Clinton told them she agreed to abide by the law, and so they permitted her to have access to federal records? What if they did this because Mrs. Clinton refused to sign an oath herself since she had no intention of complying with it, and because she ordered them to sign in her place?

What if the law required Mrs. Clinton to swear an oath at the time she left office that she had no federal records in her possession or control? What if she signed that oath knowing that nearly all of her records were in her possession and not the government's? What if she refused to sign that oath because she knew she possessed federal records contrary to law? What if she blamed her failure to sign that oath on her own inspector general? What if the law requires the inspector general to report her refusal to sign this oath to the attorney general? What if that report was made and the attorney general looked the other way?

What if the president has known since 2009 that Mrs. Clinton has concealed government records from the government? What if his assertion that "Hillary has given her emails back" to the State Department is a trick based on the slippery use of words? What if the emails of the secretary of state do not and never did belong to her, but rather to the federal government? What if her diversion of government records away from the government and onto her husband's computer server is a criminal act? What if Mrs. Clinton is a lawyer who knows the law and knows when she is breaking it?

What if Mrs. Clinton turned that law on its head by keeping all of the government's records and having her own representatives review them? What if after that review she decided which records to return to the government and which ones to destroy? What if this amounted to the destruction of government property? What if we are not talking about destroying meaningless scraps of paper, but rather 33,000 emails over the course of four years in office?

What if Mrs. Clinton seriously exposed classified secrets that could affect national security by discussing them on an email system owned by her husband and not secured by a mature Internet service provider or by the government? What if she did this because she didn't want anyone in the government or the public to see her records? What if the real reason for her theft of records was not personal convenience, as she has claimed, but fear of exposure of her true thoughts and unguarded behavior? What if she feared she could not publicly account for her concealed behavior, and so she kept it from the government?

What if when she claimed her husband's email server had never been hacked she didn't know what she was talking about? What if victims can't always tell when they've been hacked? What if the persons with whom she has been emailing have been hacked? What if one of her former aides — with the lurid nickname of the "Prince of Darkness" (real name: Sid Blumenthal) — was hacked? What if among the hacked emails of the Prince of Darkness were some to and from Mrs. Clinton strategizing about the way to portray her role at the time of the assassination in Benghazi of the American ambassador to Libya?

What if all this lawlessness and secrecy was orchestrated by Mrs. Clinton herself — a person devoid of a moral compass, disdainful of compliance with law and a habitual stranger to the truth? What if she is presently the leading candidate for the Democratic nomination for president? What if the Democrats don't care?