What Bibi can teach the GOP 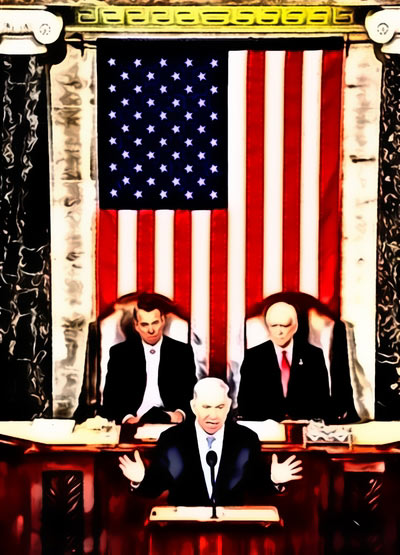 Benjamin Netanyahu, how do I love thee? Let me count the ways.....

The Israeli prime minister's speech before a joint session of Congress earlier this week was masterful. Would that congressional Republicans would take a leaf from Bibi's book and grow a spine.

It was clear that Netanyahu would arrive here and criticize the White House's plans for a nuclear deal with Iran. In the weeks leading up to Netanyahu's speech, Obama made known his displeasure, both here and in Israel. He pouted and refused to attend, and pressured congressional Democrats not to attend. Our media dutifully repeated the White House's talking points daily.

And yet the more the left complained, the hotter tickets to Netanyahu's speech became. Netanyahu ignored the brouhaha, saying simply, "I will go anywhere I am invited in order to ... defend (Israel's) future and its existence."

The event was a public relations home run. Netanyahu was treated like a rock star. It took several minutes for him to make his way through the packed chamber to the podium. He was gracious, starting his speech with fulsome praise for President Obama. His positions were clear and persuasive. His recognition of author and Holocaust survivor Elie Wiesel was presidential in its gravitas. And the crowd loved it, interrupting Netanyahu frequently with thunderous applause and standing ovations.

The White House's response to the speech was predictably petulant — "Nothing new" — and made President Obama look small by comparison. The New York Times took an equally dismissive tone, characterizing the speech as "political theatre" and accusing the prime minister of using the opportunity to impact the Israeli elections.

GOP, take note: Netanyahu is only two weeks away from a major election, and he did not shy away from controversy. By contrast, the GOP is fresh off a landslide, two years away from another major national election, and yet cannot find the fortitude to stand up to Obama on anything.

Obama wants Loretta Lynch confirmed as attorney general? No problem. Republicans outnumber Democrats on the Senate Judiciary Committee. But despite suspicions that Lynch will be every bit the Obama puppet that Eric Holder was, GOP Sens. Orrin Hatch, Lindsey Graham and Jeff Flake voted to move Lynch's nomination to the senate floor. Why? Because the GOP is afraid of being called "racists."

Obama's executive actions on immigration are unconstitutional. Republicans ran in the 2014 midterms, promising to rein in Obama's usurpation of Congress' role — and won. But just this week, congressional Republicans agreed to a "clean" bill that fully funds the Department of Homeland Security and the U.S. Citizenship and Immigration Services within it — thus effectively providing financial support for the implementation of Obama's lawless executive amnesty.

Why did the GOP cave? Because they're afraid that President Obama and his lapdog media would paint them as compromising U.S. security. This is a cynical ploy and they know it, but they capitulate, anyway.

What would a leader with Netanyahu's guts — or Ronald Reagan's — have said? Something along these lines, perhaps:

Would there be a media outcry? You'd better believe it. The media would go ballistic if Republicans in Congress dared to do what the press should be doing, and refuses to do — tell the American public the truth.

But so what? Netanyahu's reception should amply prove that Americans respect those with the courage of their convictions — even when they disagree.

Will the GOP learn a lesson from Benjamin Netanyahu's successful speech? Will they ignore the president and his shills in the press and take their messages straight to the American public?

If past is precedent, that's unlikely.

Benjamin Netanyahu is the master of his message. In his view, the survival of his nation depends upon it. The existential threats facing the United States are every bit as grave; our survival rests just as precariously on the courage of our elected leaders. And they do not seem up to the task.