Despite liberals, workers get new rights 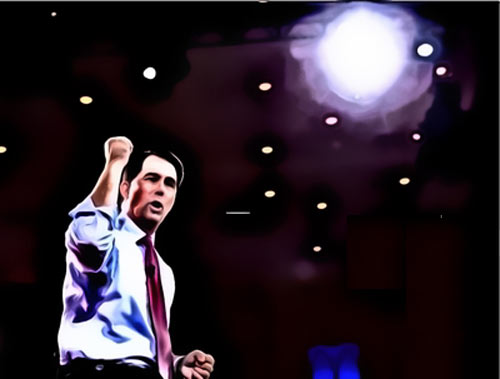 Gov. Scott Walker of Wisconsin has signed a measure freeing workers in his state from having to pay union dues if they want to keep their jobs, naturally enough upsetting labor honchos wanting to grab every worker nickel they can. Not the least of them: Randi Weingarten, chief of the American Federation of Teachers.

"Scott Walker fails the test of common decency and common sense," said this woman representing teacher unions that commonly abet innocent American youths in failing standardized tests. Her comments came after Walker signed a bill making his state number 25 in enacting a right-to-work law that does exactly what its name implies. It gives people the right to work without forking over their hard-earned money to unions relying on coercion as a mode of survival.

"If you want good jobs, then you must stand up for the workers who hold them," Weingarten asserted in a statement quoted by the Wisconsin Reporter, an online news agency. "If you want a strong middle class, then you can't take out the unions that built them. If you want higher wages, then workers need a voice."

In fact, Walker did the opposite of reducing jobs or hurting the middle class and explicitly gave workers a voice. The legislation was a rights extension, not a denial of anything, even if President Barack Obama called it "anti-worker." The worry of Weingarten and Obama, you see, is that these workers might do what's best for them by refusing to join and pay dues to unions, some of which pay Weingarten's annual salary (reported as $375,174 plus $182,701 in expenses) and support Obama politically.

Would these workers thereby be "anti-worker"?

No, because the reason you have states enacting these laws is that unions can squeeze the life blood out of businesses whether the left ever wants to admit it or not, and when you make that less likely in a state, businesses are more likely to go to them, providing more jobs, more opportunities, more cash for raising families.

Another benefit is improved education. Even before signing this bill, Walker had signed another that let teachers drop out of their unions in his state, and as of last fall, something like a third had.

The good in that is that less strong unions are less likely to pull off the kinds of tricks that have haunted New York City, to pick an example outside of Wisconsin. Joel Klein, a former chancellor of New York City schools, has emboldened the anti-union argument with specifics about how it can take as much as two years at a cost of more than $300,000 to get an incompetent teacher out the classroom in the city, an anti-student abomination.

Weingarten gets furious at the suggestion that unions get in the way of the best education has to offer and, when she was head of the United Federation of Teachers in the city, predicted that a charter school the union started in Brooklyn about a decade ago would prove her point.

It did no such thing. Despite bunches of money coming its way from a foundation, it could not hang onto staff, overshot its budget and winced as many students did poorly on test assessments. It is noted in a Wall Street Journal editorial, for instance, that no more than 11 percent of the school's students were rated as proficient in English and 18 percent in math in 2014 while many charter schools with much the same demographics did considerably better.

It is now closing its doors.

Few would question that, on occasion, unions have played a noble role in American life, but their strength in private industry lessened as past industrial faults were corrected by law and convention and the unions themselves weakened businesses with overreaching demands. Union strength has grown in the monopolistic public sector at sometimes grievous public expense, but some political leaders like Walker are fighting back effectively, thanks to democracy and the concept of fair play.