The ADL's disturbing obsession with race 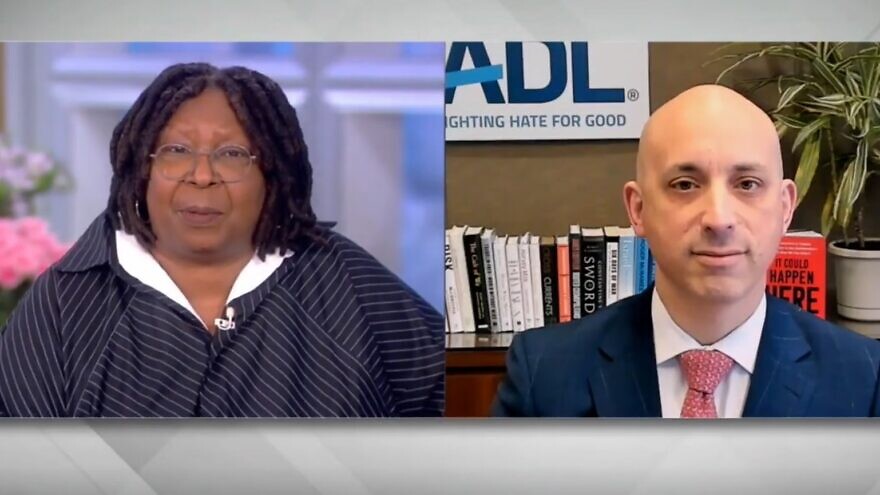 Whoopi Goldberg put the issue of race and anti-Semitism in the headlines this week with her gobsmackingly stupid comments about the Holocaust in reaction to the banning of the graphic novel Maus by a Tennessee school board. Her claim on ABC's "The View" that the Holocaust wasn't about racism and was just "white people doing it to white people" reflected the intersectional myths that have become the orthodoxy of many in the chattering classes. The women on the popular morning talk show often get away with saying outrageous things; however, speaking about the murder of 6 million Jews in this manner was too egregious to pass without notice.

When, to her surprise, she was subjected to a wave of criticism for her insensitivity and ignorance, she sought aid from liberal allies. CBS late-night comedy host Stephen Colbert had her on for a friendly interview, but her doubling down about her talk about race—in which Jews are classified as merely another tribe of empowered whites—just got her in deeper water.

More helpful was the appearance of Anti-Defamation League CEO and national director Jonathan Greenblatt on the next episode of "The View," in which he attempted to explain how the Nazis perceived Jews as an inferior race, and that her summary of the tragedy as merely "man's inhumanity to man" was inadequate. Greenfield's appearance appeared to offer Goldberg (a stage name adopted by the New York-born African-American comedian, whose real name is Caryn Johnson) absolution. But ABC nevertheless suspended Goldberg for two weeks for the incident.

While it's difficult to sympathize with her, the practice of punishing people for speech we don't like by taking away their livelihoods is deplorable. That's true even if Goldberg got off easier than "Mandalorian" actress Gina Carano or fellow comedian Roseanne Barr, who were both summarily fired and essentially rendered unemployable in Hollywood for making comments that were deemed offensive. Cancel culture is generally wrong no matter who is being targeted.

But perhaps the most interesting aspect of this controversy is the role that the ADL played in trying to correct the record about race and anti-Semitism. That's because although what Greenblatt said on "The View" was correct, his comments didn't reflect the way the ADL has been operating for the past two years as he has dragged the group farther and farther to the left.

Greenblatt's strategy has been to shift the group from its former stance as a nonpartisan organization focused on fighting Jew-hatred to one that is essentially a liberal mouthpiece for the Democratic Party that he served prior to joining the ADL. In the summer of 2020, the ADL endorsed the Black Lives Matter movement. It alsoaligned itself with those advocating for critical race theory, despite the clear links to anti-Semitism that existed for both the movement and the toxic ideology. The group's attempt to brand critics of BLM and of CRT as racist is appalling and shows how it has essentially abandoned its brief as the one group tasked with the job of monitoring and combating Jew-hatred.

But that wasn't all. On its website, it posted a definition of racism—in which it limited racism to prejudice against persons "of color" that actually was similar to the gross comments for which Goldberg had to apologize with Greenblatt's assistance. As The New York Sun noted: "The ADL's definition of racism … invoked "the belief that a particular race is superior or inferior to another," and that "a person's social and moral traits are predetermined by his or her inborn biological characteristics."

But after the rise of BLM, the groups' definition was altered to make it more woke: "The marginalization and/or oppression of people of color based on a socially constructed racial hierarchy that privileges white people."

Nor was the ADL unaware of the irony that Goldberg's words were in sync with its definition since as soon as the dustup occurred, it scrubbed the intersectional definition from its website and restored the old entry, although appending to it a lengthy note reportedly by Greenblatt in which it claimed that the group's focus on the racism of whites was "true but not the whole truth."

This Orwellian turn on the part of the ADL would be noteworthy in and of itself. Yet it's also an element of another controversy in which it has recently embroiled itself when it hired activist Tema Smith as its new director of Jewish outreach and partnerships.

As others have pointed out, Smith has a long history as a bitter critic of Israel and a left-wing Twitter troll. In an earlier time, it would have been unimaginable for a group that was as solidly pro-Israel and reflexively centrist as ADL to hire such a person, but it made her the perfect job candidate for the Greenblatt era. Though Smith didn't exactly recant her past beliefs, she did issue a kind of apology for them after joining the ADL that was unsatisfactory to many mainstream Jewish thinkers and that also offended many of her former allies on the far-left who not unreasonably branded her a sellout to the Zionists.

Though it's unlikely that Smith's shift was entirely sincere, people are entitled to change their minds. Though social media encourages people to spontaneously spout outrageous comments, the idea that even the worst takes must live on forever is a harsh standard to live by.

The problem with the hire is not what she might have posted on Twitter in the past but her current assignment. While outreach is important for the entire Jewish world in a time of rising assimilation and a Jewish population that is largely disconnected from the community and a sense of Jewish peoplehood, Smith's brief is focused on "Jews of color."

That Jews who are not white sometimes face discrimination within the community is deplorable and should be condemned. Adolf Hitler may have thought Jews were a race; however, the truth is that they come in all different colors and places of origin, something that the non-Jewish Whoopi Goldberg doesn't seem to understand. The idea of dividing Jews by skin color can never be accepted any more than bias against converts should be tolerated.

In its eagerness to get in on the moral panic about race that swept across the country after the death of George Floyd the ADL is embracing the cause of "Jews of color." Yet in doing so, it and others on the left have lumped in a variety of communities including those Jews from Middle Eastern, Mediterranean and North African countries, most of whom do not identify with the term. As such, the ADL is not only undermining a basic concept of Jewish unity, it's also utilizing the same intersectional playbook used by Israel-haters to brand the Jewish state and its supporters as possessing "white privilege."

Like its changing definition of racism, the group is playing with fire. Jews should not be defined by skin color; no one should. The point of the civil-rights movement was to discard the obsession with race that fueled segregation. America should aspire to a colorblind society, and yet CRT and intersectionality demand that it be treated as the most important element in defining any person.

Joining with its left-wing allies to apply this idea to Jews across the board, the ADL is again undermining the cause for which it was founded and providing useful cover to those who are seeking to harm the Jewish people, here and in Israel.