Much talk that something's up with Mueller --- too bad nobody knows 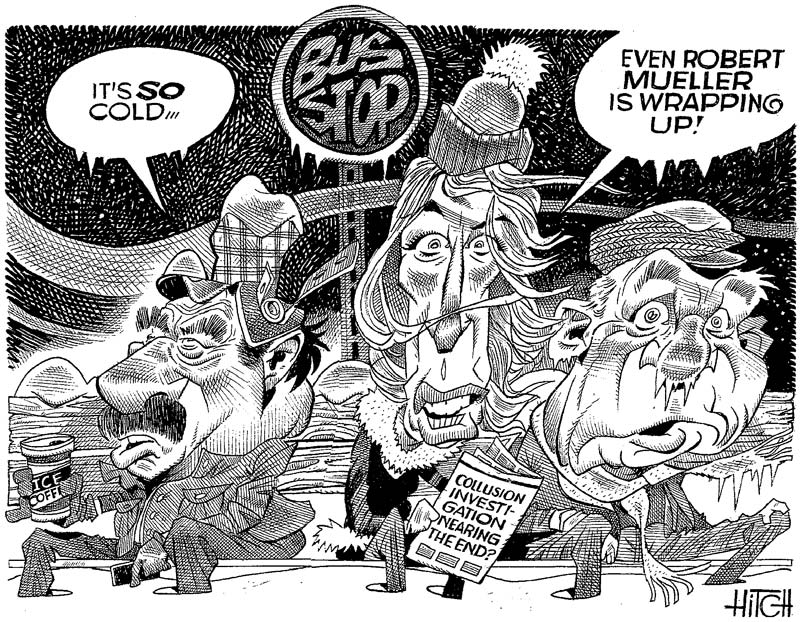 The first is that he is winding down his probe and is unlikely to allege that the Trump campaign and Russia conspired to fix the 2016 presidential election.

The second is that he is still going strong, with the biggest charges, perhaps including the fabled collusion allegation, yet to come.

Which is correct? No one outside the Mueller office knows. There are data points, or at least tea leaves, pointing in all directions. But whatever the reality is, there is at this moment a sense that something is imminent from Mueller, and that sense is shaping Trump-Russia politics.


House Democrats are revving up Trump investigations, and one of the questions they face is whether to try to replicate the Mueller probe or rely on the special counsel's findings when it comes time to consider impeaching the president.

If the House carries out a full-scale, retracing-Mueller's-steps investigation, it will be led by Intelligence Committee Chairman Adam Schiff.

In recent days, Schiff has vowed that his new Trump-Russia probe will cover material he says Mueller -- who has far more investigative power than the House -- might not have been able to examine.

Now, Schiff is taking an extra step. He is refusing to say if he will accept Mueller's judgment, should Mueller issue a report that does not allege collusion.

"If (Mueller) finds that there was no direct collusion between the Trump campaign and Russia, will you accept that?" CNN's Dana Bash asked Schiff recently.

"Well, we're going to have to do our own investigation," Schiff responded.

Schiff said he would be "very interested" to learn what Mueller has found. But he did not say he would accept Mueller's findings. So Bash asked again.

"Will you -- given the fact (Mueller) has had such an extensive investigation, will you accept the findings, separate from the investigation that you are doing?"

The bottom line is that Schiff would not answer whether he would accept a Mueller no-collusion conclusion. But his non-answer made abundantly clear that the answer is no.

At the same time, Schiff still harbors hopes for Mueller. Asked about the Roger Stone indictment for lying to Congress -- yet another Mueller process crime charge that does not allege a criminal conspiracy -- Schiff expressed hope that there will be more.

"It is very possible that the best evidence is yet to come," he said. "There may be, for example, evidence of collusion or conspiracy that is clear and convincing, but not proof beyond a reasonable doubt."

One takeaway from all that is that Schiff, who likely knows as much about Trump-Russia evidence as anyone in the House, has no idea what Mueller has.

That puts Schiff in the same place as everyone else on Capitol Hill. "I am in the dark," one plugged-in lawmaker said when asked where Mueller might be headed. "Zero visibility about what is next."


All Congress really knows about Mueller is the cases he has brought -- the charges of lying to the FBI or to Congress, the charges, in the case of Paul Manafort, of tax evasion and other financial crimes, and the charges against Russians.

There are also the cases he has not brought. He hasn't alleged collusion. He hasn't outlined any scheme between Trump and Russia, even though he has thoroughly investigated some of the figures -- Manafort, Rick Gates, Michael Flynn -- most likely to have been part of such a scheme, had it existed.

So Mueller remains a black hole. Maybe he really is finishing up his investigation. Maybe he's not. House Democrats, on the other hand, are far more transparent. They're going after Trump full-tilt from now on, regardless of what Mueller does.