What Does 'Luck' Have To Do With Trump? Everything, If You Poll Presidential Scholars 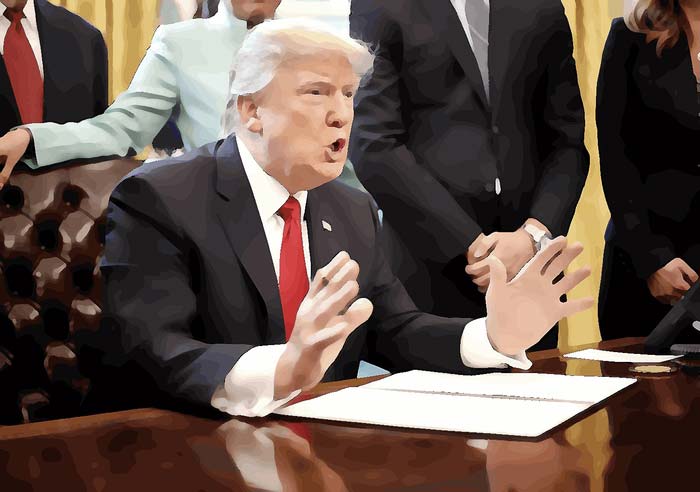 For fans of political bar debates, I give you this latest ranking of the American presidents  courtesy of the Siena College Research Institute.

The top five comes as no surprise — George Washington, followed by Franklin Roosevelt, Abraham Lincoln, Theodore Roosevelt and Thomas Jefferson (those five have stood atop the White House pyramid since Siena first began this exercise in 1982, coinciding with the second year of a new presidency).

Here's why Trump bottomed out:

Siena asked a team of presidential scholars, historians and political scientists to rank the presidents according to 20 different categories. In only two of those categories — "luck" and "willingness to take risks" — does Trump finish outside the bottom-five.

And he finished next-to-last in "background" (defined as "family, education, experience"), "communication ability" and "party leadership."

I'm going to avoid the question of bias, though I will point out the rest of the presidential top 20 includes eight Democrats (Truman, Kennedy, Wilson, Polk, Clinton, LBJ, Obama, Jackson) and only three Republicans (Eisenhower, Reagan and McKinley).

Bill Clinton, by the way, finishes 15th overall and 30th when it came to "avoid crucial mistakes" (you'd think a dalliance with an intern would rate far worse).

I have two questions about Siena's latest findings.

First, how does Trump rate 43rd out of 44 in "communication ability?" Yes, the tweets often are objectionable; the stream-of-consciousness rallies and press avails can descend to a juvenile, bullying theatre of the absurd.

But it's not as if Trump has failed to get his point across to his exceedingly loyal base, which is one of the principle reasons why he's in this poll and not Hillary Clinton.

Similarly, one could quibble about what constitutes partisan fidelity. Jimmy Carter and Gerald Ford (26th and 27th overall, respectively) faced serious primary challenges. And yet they finished 25th (Ford) and 37th (Carter) in "party leadership". Harry Truman, who saw Southern Democrats defect to the "Dixiecrat" movement in 1948, was 14th in "party leadership."

My second question: while Siena has been compiling this poll in every new presidency dating back to Ronald Reagan's, is it a little too early to include the incumbent?

Any Kennedy assessment based solely on his first two years in office would be a mix of the positive (Cuban Missile Crisis, college desegregation and NASA call-to-arms) and the not-so-grand (Bay of Pigs, disastrous meeting with Khrushchev).

It's the third and final year of his presidency that elevates Kennedy to levels of mysticism and martyrdom — the American University commencement address (aka, "the peace speech") which calls for a nuclear test ban that he signs in October; the West Berlin speech ("Ich bin ein Berliner"); the fatal motorcade in Dallas.

As for Reagan, consider a few of the grades he received in the first Siena poll back in 1982: just 38th overall in "foreign policy accomplishments" (he's now 12th, one behind Woodrow Wilson) and 29th in "handling of the economy" (he's now 18th, a full eight spots behind Barack Obama).


Speaking of Obama: he finished 15th overall in the 2010 poll (he's now ranked 17th), based in part on some head-scratching numbers: 18th overall on "relationship with Congress" (there was none with Republicans — and some Democrats complained that Obama seemed aloof) and 17th overall on "handling of the U.S. economy" (the Great Recession ended that year, but foreclosures continued and unemployment remained high).

Getting back to my point: grade Reagan two years into his presidency, amidst Cold War iciness and a lingering recession, versus a post-presidency in which the Soviet Union collapses and his successor inherits an unprecedented burst of economic activity and it's a different ballgame.

This isn't to suggest that Trump is destined for Reagan's success. Pair an economic downturn with failures abroad and a toxic political climate at home and perhaps he deserves to be a presidential cellar-dweller.

But should Trump earn a second term, the economy continues to prosper and he can point to some successes overseas (settling the trade dispute with China, for example), where will he show up in the 2026 presidential poll?

Other American presidents have benefitted from scholarly hindsight. George W. Bush, ranked 40th among the 43 presidents in 2010, now sits at 33rd, one ahead of Chester Arthur, one behind Rutherford B. Hayes and two slots behind Calvin Coolidge (let's call this "the Republican ghetto"). Dwight Eisenhower has moved from 11th to 6th since this poll's inception as historians have changed their opinion of Ike from sleeper overseer of the 1950's to an adroit behind-the-scenes manager.

Apparently, there is room for revisionism. Time will tell if presidential scholars are willing to grant Trump much beyond "luck."