Palestinians refuse to meet with Trump's adviser, so he's tweeting to them 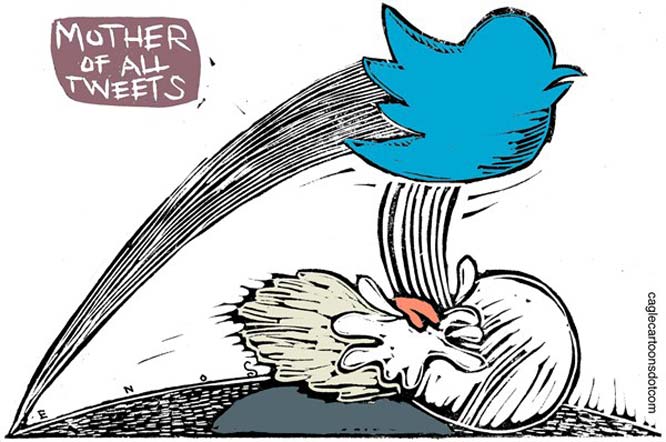 JERUSALEM - It's been more than a year since senior Palestinian officials have agreed to meet or even speak with representatives of the Trump administration, but now President Donald Trump's special representative for international negotiations, Jason Greenblatt, appears to have adopted a new diplomatic channel:

Twitter. Over the past few weeks, Greenblatt has been tweeting his thoughts, requests and criticisms to those Palestinian leaders who are active on the popular social media platform. And earlier this month, he seemed to confirm his new brand of tweet-diplomacy, writing:

"And who says the U.S. and the P.A. aren't talking? The only difference now is that we are speaking about these matters in public via twitter so the public can understand everyone's positions. Transparency is better for all." Since December 2017, when Trump announced he would recognize Jerusalem as Israel's capital and transfer the U.S. Embassy there from Tel Aviv - a move considered highly controversial and one-sided by the Palestinians - leaders and peace negotiators from the Palestinian side have waved off all U.S. diplomatic efforts.

Despite the cold shoulder, the U.S. administration says it has forged ahead with what Trump once described as "the deal of the century" to solve the decades-old Israeli-Palestinian conflict. In recent weeks, there has been speculation that this improbable peace plan will be unveiled following Israel's general election, which takes place on April 9. There has been no official indication of it, however.

In fact, there has been little indication of any aspect of the mysterious plan, and any suggestions of what it might contain have immediately been denied by Greenblatt.

It was such a denial that kicked off this latest round of tweet-diplomacy on Jan. 17.

Israeli journalist Barak Ravid reported and tweeted that he had some details about the opaque peace plan, nothing too untoward, just some of the basic tenets. Ravid's report immediately sparked a response from Greenblatt: "While I respect @BarakRavid, his report on Israel's Ch. 13 is not accurate. Speculation about the content of the plan is not helpful. Very few people on the planet know what is in it ... for now ..."

A few days later, as the Twitterverse discussed what might or might not be accurate about the points raised by Ravid - and Greenblatt's brush off - Hanan Ashrawi, a member of the Palestine Liberation Organization's executive committee, tweeted:

"You need a large grain of salt to believe any leak from Israeli sources, especially in the context of elections rhetoric. Anyway this has been vehemently denied by @jdgreenblatt45. Hypotheticals & red herrings to distract & divert. The US administration has zero credibility."

"@DrHananAshrawi: you may dislike our policies & decisions, but to say we have "zero credibility" is simply not factual. @POTUS has kept his commitments, such as recognizing #Jerusalem as the capital of #Israel & moving our Embassy to #Jerusalem."

The message was followed by a long thread that seemed to shine a spotlight on the Trump administration's frustrations with the Palestinian leadership for its continual refusal to to meet with or speak to U.S. officials. Since moving the U.S. Embassy to Jerusalem last May, the administration has further alienated the Palestinians by cutting back on almost all avenues of aid and funding, even to the point where the financial lifeline that supports the Palestinian Security Forces - essential for assisting the Israelis in maintaining security and peace in the area - also looks set to end.

This contentious point was highlighted by Nabil Abu Rudeineh, a spokesman for Palestinian Authority President Mahmoud Abbas. He said the cutbacks would have a negative impact on all and increase instability. Almost immediately, Greenblatt responded on Twitter:

"Disingenuous quote from Nabil Abu Rudeineh, spokesman for Palestinian President Abbas: 'The suspension of aid to our people, which included critical sectors such as health and education, will have a negative impact on all, create a negative atmosphere, and increase instability.' "

That was followed by another long stream of tweets explaining why the aid was cut - mostly, said Greenblatt, because the Palestinians refused to take responsibility and engage in change:

"Mr. Abu Rudeineh: time to get serious. Either work on peace and/or work on helping Palestinians. The old messages and methods don't work anymore - not with the US, and not with many other countries. It's only a matter of time until other countries say this out loud too."

Greenblatt highlighted comments made recently by other prominent Palestinian leaders who have been highly critical of the United States, eventually working his way back to Ashrawi, who appeared to have called the American adviser out on his new brand of online diplomacy:

"Twitter diplomacy/policy is the triumph of narrow minds, anaemic intellects & minuscule attention spans, precluding thorough & responsible analytical/critical interactions that are honest, contextual & insightful. We are witnessing the global ramifications of this failure."

To which Greenblatt responded:

"Dr. Ashrawi - my door is always open to the PA & Palestinians to speak. In fact, I've met many Palestinians over the past 14 months & continue to. I'm happy to meet anytime - you, Saeb (Erekat) & all your colleagues are ALWAYS welcome to visit me at the @WhiteHouse to speak in person.