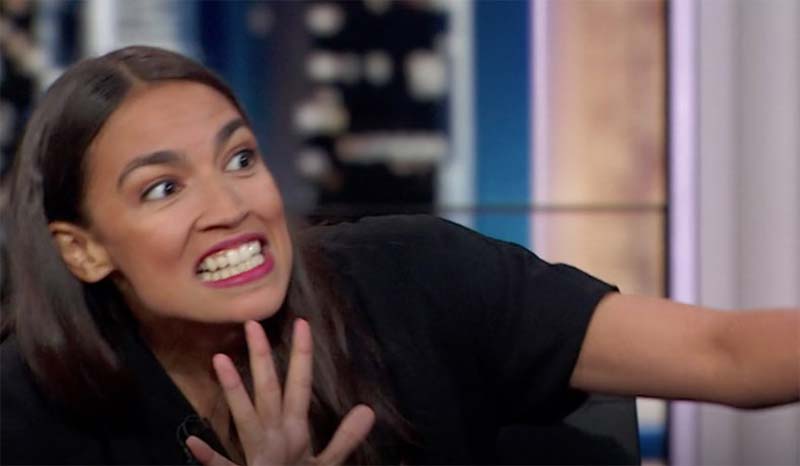 Rep. Alexandria Ocasio-Cortez's now infamous talking points on the Green New Deal are the most unintentionally honest explanation of the neo-socialism now gripping the Democratic Party.

Too honest, apparently. After her office sent the "FAQ" to NPR, The Washington Post and other news organizations, and posted a similar version on her congressional website, they were met with withering criticism -- prompting Ocasio-Cortez to furiously backtrack, seeking to disown and discredit documents her office had produced, posted and distributed. Sorry, you don't get to do that.

Ocasio-Cortez told us what is really behind her Green New Deal. Now she, and the Democrats who endorsed her plan, have to live with it.

Ocasio-Cortez has been pilloried for her plan to "get rid of farting cows and airplanes," upgrade or replace "every building in America," replace "every combustible-engine vehicle" and provide "economic security" for people "unwilling to work" -- and rightly so. The old five-year plans of the former Soviet Union are modest, by comparison, in their pursuit of full socialism.

Yet the big untold story is her admission that all of this cannot be paid for simply by taxing the rich. Sen. Elizabeth Warren, D-Mass., is campaigning for president on a wealth tax, while Ocasio-Cortez has proposed 70 percent marginal tax rates on wealthy Americans. The message is clear: We'll soak the millionaires and billionaires and mega-rich corporations so we can give you free stuff.


But her talking points (even the watered-down version that was posted on her website) admit that won't come close to covering the full costs of her Green New Deal. "The level of investment required is massive," the talking points declare. "Even if every billionaire and company came together and were willing to pour all the resources at their disposal into this investment, the aggregate value of the investments they could make would not be sufficient." Her document says that funding the Green New Deal requires World War II levels of government spending of between 40 and 50 percent of gross domestic product.

Today, federal spending amounts to 21 percent of GDP, or $4.4 trillion annually. Increasing it to between 40 and 50 percent of GDP would require doubling government expenditures to between $84 and $105 trillion over 10 years (and that's without factoring in rising GDP). But Warren's wealth tax would raise just $2.75 trillion over 10 years. And according to the nonpartisan Tax Foundation, Ocasio-Cortez's 70 percent marginal rate might raise at best $189 billion over 10 years, and could actually cost the federal government $63.5 billion in lost revenue by stifling economic growth and encouraging capital flight.

Taxing the rich won't come close to covering the costs of the Green New Deal, which includes a bunch of socialist policies that have nothing to do with climate change. Manhattan Institute budget expert Brian Riedl has calculated the 10-year costs using liberal and nonpartisan sources. The results are stunning: $32 trillion for a single-payer health care plan; $6.8 trillion for a government jobs guarantee; $2 trillion for education, medical leave, job training and retirement security; and between $5 trillion and $40 trillion to fund universal basic income to support those who are "unwilling" to work. (The final price depends on how "universal" it is.) Grand total? Between $46 and $81 trillion.


The only way to raise the revenue for even the low end of that estimate, he calculates, would require establishing a European-style value-added tax of 87 percent on everything we buy, or a new 37 percent payroll tax for every American (on top of the current 15.3 percent payroll tax and all existing federal, state and local taxes.)

And that covers the price tag only before we even get to the energy and environmental policies in the Green New Deal. It is virtually impossible to accurately calculate the cost of replacing every vehicle that uses a combustion engine; bringing high-speed rail to every corner of America; upgrading or replacing every building in America; and replacing all fossil fuel energy with alternative energy sources. We're talking hundreds of trillions of dollars. It would be virtually impossible to pay for it. And Americans don't want to anyway.

A recent Kaiser Family Foundation poll found that 56 percent say they support Medicare-for-all, but when they learn it requires more taxes, 60 percent oppose it.

With her FAQ, Ocasio-Cortez has inadvertently exposed the neo-socialist lie that you can get something for nothing. The Democratic Party's embrace of that lie is going to get President Trump re-elected