Still capitalists at heart, tech titans cozied up to the progressive Left --- until the contradictions became too obvious 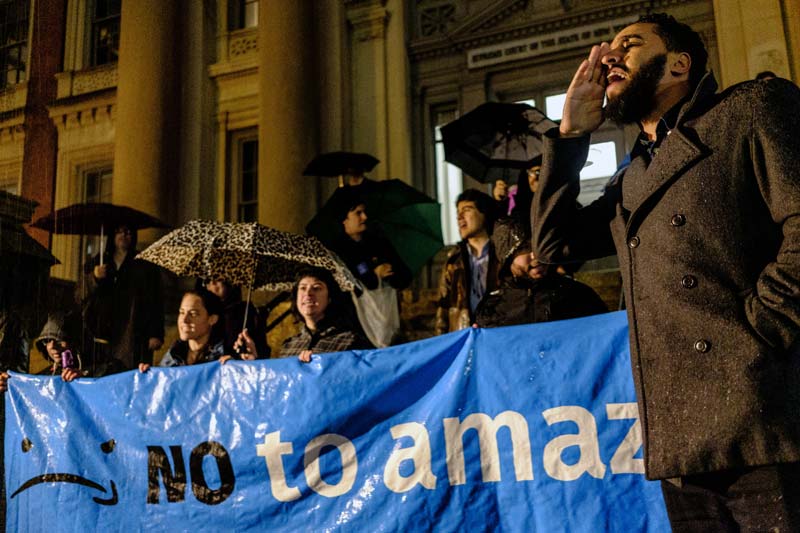 Amazon's decision to abandon New York City — leaving a $3 billion goodie bag of incentives on the table — represents a break in the progressive alliance between an increasingly radicalized Left and the new technocratic elite.

For a decade, the oligarchs of Silicon Valley and Puget Sound worked overtime to win over progressives. For the most part, they enthusiastically back the Left on its immigration, environmental, gender, and racial agendas. The merger of the tech oligarchs with the Democrats went swimmingly — until the contradictions became too obvious. Even as they muzzled conservatives both inside and outside their companies and donated heavily to President Obama and other Democrats, they have remained at their core ruthless capitalists, determined to crush competition and shape society to their liking.

As Amazon has discovered, though, progressives now seek to limit the power and influence of these monopolistic behemoths. The Left's new firebrands, including New York's freshman representative Alexandria Ocasio-Cortez, much as Bernie Sanders did in 2016, openly regard both tech oligarchs and Wall Street billionaires as class enemies. The progressives' alliance with private-sector unions, whose presence has shrunk in tech-driven urban economies like San Francisco and Seattle, has drawn attention to Amazon's non-unionized warehouses and fulfillment centers, where widespread claims of low pay, brutal management practices, and an accelerated search to replace workers with robots have energized labor advocates. The new scrutiny is especially critical because an increasing number of millennials — soon to be the nation's largest voting bloc — say that they prefer socialism to capitalism, threatening the future profits of even the most "woke" Silicon Valley plutocrats.

One can appreciate the economic benefits that firms like Uber, Lyft, Salesforce, and others have brought to San Francisco and other tech-oriented cities. Yet the concentration of high-end businesses has also helped create a neo-Dickensian reality: sky-high housing prices, widespread homelessness, and a rapidly shrinking middle class. There are now more drug addicts in San Francisco than high school students. Rising rents have undermined that city's cherished bohemian culture and hastened a rapid decline in the minority population, both in the city and across the tech-dominated Bay Area. In 1970, 96,000 African-Americans lived in San Francisco; today, barely 46,000 make their homes there, constituting less than 5 percent of the city's population. More than half of the Bay Area's lower-income communities, notes a recent UC Berkeley study, are in danger of mass displacement. Amazon, it seemed to many progressives, threatened to bring the same conditions to New York.

Tech-dominated metros, though ostensible bastions of progressive values, increasingly resemble, as Wired recently noted, a "caste" system dominated by oligarchs and their key employees — "feudalism with better marketing." Many working- and middle-class people have been reduced to joining the swelling "precariat" of temporary workers, while some have even slipped into the ranks of the homeless. Once dominated by manufacturing employment, Seattle has been transformed by Amazon, which has created nearly all the 60,000 new jobs downtown since 2010. The new housing demand, imposed on a highly restricted real-estate market, has driven metropolitan house prices stratospherically higher. All the signature San Francisco problems — homelessness, disappearing families, wealth inequality — are now all too evident in the Emerald City. Seattle's African-American population has stagnated as the city has boomed and is losing its hold even in its traditional neighborhoods.


Seattle's rising socialist political class did not cheer the city's transformation. They have demanded that Amazon and other tech giants pay to alleviate homelessness and housing shortages. But Amazon CEO Jeff Bezos, responsible for nearly 20 percent of the city's office space, has the advantage of operating in America's largest "company town." When push came to shove, he could threaten to undermine the city's entire economy in ways reminiscent of a mill-town company boss in the early industrial revolution.

The oligarchs are now reaping what they sowed from allying themselves with the progressive Left. They have been eager to promote themselves as loyal followers of the Left's party line on issues of racial diversity, trans-awareness, and feminism, but that line now has moved toward economic policies that stress egalitarian solutions. Amazon may well be a great expression of capitalist innovation, but Ocasio-Cortez considers the very existence of billionaires like Bezos "immoral." Rather than accommodating capitalists like Bezos, her Green New Deal envisions a socialist ecotopian commonwealth, with no place for even the most enlightened billionaires. To keep the pitchforks at bay, tech moguls might favor increased subsidies to both the middle class and the poor, but they don't show much interest in having their own dominance constrained by meddlesome regulations or confiscatory tax rates.

In New York, a tough political atmosphere at any time, the oligarchal dream of combining monopoly capitalism with dogmatic progressive orthodoxy turned into a political nightmare. Rather than win new allies, the tech titans have wound up bolstering the very groups that want to eliminate them. And this is likely to mark just the beginning of a process that will unveil — in a way that no doubt would have delighted Marx — the fundamental contradictions of combining socialist aspirations with even beneficial capitalist cupidity.