Did Jussie Smollett use the media, or was he created by it? 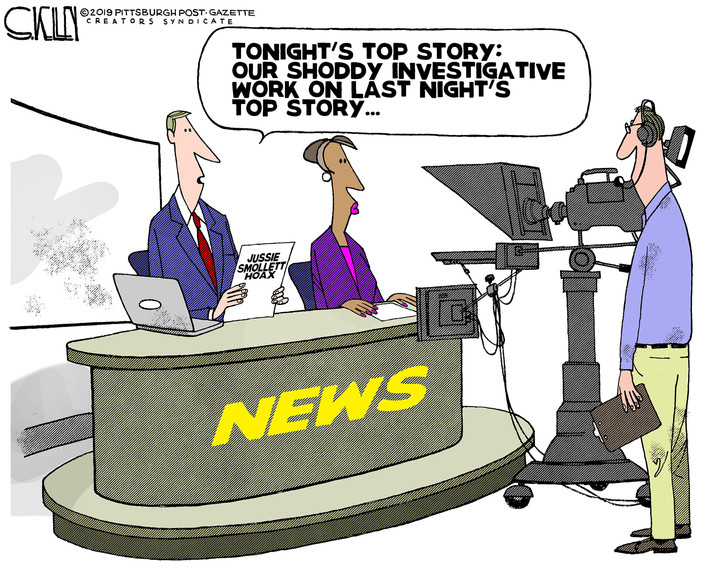 "The question that every single person asks is why?" said CNN anchor Don Lemon. "Why?"

He was speaking, of course, of TV actor Jussie Smollett, who just days ago was the celebrated survivor of pro-Trump Republican bigotry.

Chicago police have a different story. They call him a liar and have charged him with a felony for making a false hate crime report.

So now Smollett is known for something else.

He's known as the fool who is said to have paid his fake attackers by check, so he could be the star and victim of his own fake Republican hate crime.

As Smollett made bond in Cook County Criminal Court on Thursday, he looked rather sad, and exhausted.

And Don Lemon asks why.

This has all been quite perplexing to many of the national TV types on CNN and MSNBC and others of the left, this question of why.

But why ask why?

Long ago, they set aside old-fashioned journalistic skepticism in order to become performance artists.

TV does such a great job squeezing emotion out of grievances and demanding the federal government address the grievances, legitimate or not.

And so, these national TV anchors and pundits of the left continue marching on foot: Left, left, left, and ever leftward. They rule America's airwaves. They make superheroes out of people like Jussie Smollett.

It has been argued that some of these TV performers are more loyal to the demands of the electronic grievance industry than they are to the finding of fact. Perhaps.

But they're busy cleaving to a powerful narrative, one that has been pretty much accepted throughout journalism since the 2016 election of Trump: that Republicans and conservatives are evil, racist and bigoted, or at the very least, suspect and dangerous.

They set the rules. They rewarded Smollett for his performance. They used him as their mannequin. And as an actor, even a lousy one with the depth of a piece of linguine, he understood. He performed as required and that kept the lights shining bright on him.

But those who shone the light, and rewarded him for his performances, need a name for future cases just like this one. Because there will be more cases.

Henceforth, let them be known as The Smollettburo.

"Yes, but of course," said CNN anchor Alisyn Camerota in discussing motive, "there is that appetite for why would a successful actor on a great trajectory, a talented guy, need to do something like this? That will eat at us."

Because the Smollettburo is ultimately responsible for Jussie Smollett.

Because what Smollett did actually works. Becoming an official victim of Republican hate is something to be celebrated. It confers leverage and status upon the victim. It is bleeping golden.

As a double minority, he could say he'd been set upon by Trump supporters, and who would dare challenge him?

We used to. Reporters used to challenge people. Why? Because people lie to us all the time. The old line from Chicago reporting history, "If your mother says she loves you, check it out," still applies.

And sometimes the people we talk to can't help but lie to themselves.

But when the finding of fact becomes subject to a political narrative, something bad happens, in law enforcement or journalism.

And there's the thought crime issue to deal with.

Who wants to be accused of insensitivity or anti-gay bigotry or racism? These can be career-enders. Journalists know this.

Still, in the main, Chicago reporters kept their skepticism. But the national pundits, the influential members of the great and powerful Smollettburo, were true believers.

Some applauded. Smollett's story, however ridiculous, could be used to generate fury and outrage and rally the left against common enemies — Trump and Republicans.

But is that journalism? Or is it propaganda and performance?


In his now infamous interview with ABC's Roberts, Smollett bragged about his anti-Trump politics. He said his attackers put a noose around his neck, that one of them shouted "This is MAGA country!"

He said he believed "in truth."

All of this made Chicago police Superintendent Eddie Johnson angry.

Johnson didn't mince words at his news conference on Thursday.

Johnson, a black man, condemned Smollett, a black man, for using a noose as a prop. That mocked the real and ugly and deadly history of African-Americans as true victims of racism, Johnson said.

"Celebrities, news commentators, and even presidential candidates weighed in on something that was choreographed by an actor," Johnson said.

The inconvenient truth in all of this?

Smollett is an actor, and a rather stupid one at that. He's considered the criminal, yes, but he performed as expected. He played the innocent victim of Republican intolerance.

The Smollettburo approved. They enabled him.

And now they ask why?