Pols in blackface? For Dems, it beats defending late-term abortion 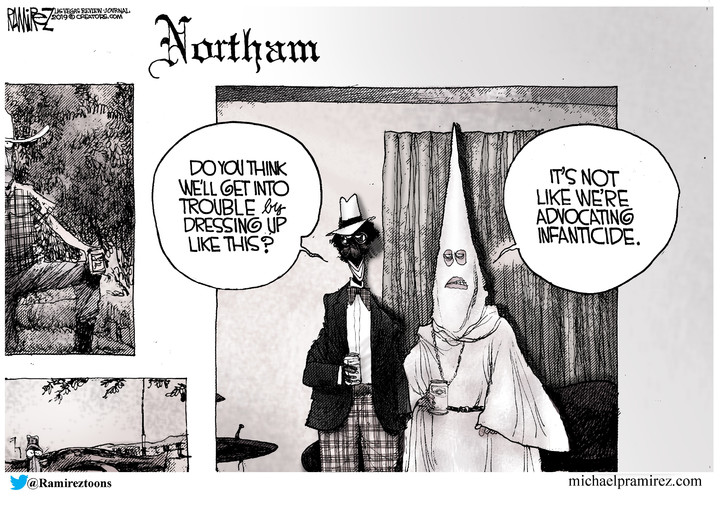 America has been told, relentlessly, that the nation became officially and irrevocably unhinged in .

That's when a vulgar reality TV star flipped off the calcified establishment, became president and triggered much hysterical weeping and teeth-gnashing among pundits and other palace guardians who play journalists on TV.

But as we lurch toward the 2020 presidential campaign, what of the ?

Is the party of the angry American left -- moving ever leftward and angrier by the minute -- any more stable than of two years ago?

No. There's a frenzy among the unleashed by the upcoming presidential campaign. We haven't seen its like except in those paintings of hell.

The Democratic center has collapsed. Moderates are hunted down and cast out by the hard left that pulls the party's chain. The late poet famously warned that "when someone shows you who they are, believe them the first time."

And that's the scary part. What are showing the nation other than that many of them want to take us to ?

"It concerns me that so many voices within the Democratic Party are going so far to the left," said former CEO , who's thinking about running for president as an independent and wondering how can possibly pay for all the things they're promising, from universal health care to free college, free everything.

Now the left that rules the party wants his head on a pike.

That doesn't win elections. That loses elections. But they don't want to hear it. Addiction to anger overwhelms them now.

How else to explain those standing ovations and the wild applause in the chamber when abortion up until birth, for any reason, was approved and signed into state law?

Gov. had the lit up pink in victory over helpless infants. And then he insisted that he was Roman Catholic and an altar boy. Cuomo's skin must be made of wood.

Wood can't blush. Wood can't feel any shame. And apparently, neither does the old altar boy.

Most Americans don't support abortion deep into the third trimester. Most Americans wouldn't applaud in triumph. They'd feel shame for those clapping, like the old altar boy thumping his chest in victory. And they'd feel sorrow for the babies.

That's most people. But Democratic politicians in felt the need to display triumph, loudly and stridently. The leftward tilt of the Democratic Party is almost a desperation, a hunger of the zealous.

This has already hurt presidential candidate Sen. , the Democrat. She made it clear she wants to get rid of private health insurance. "Let's eliminate all of that," Harris said. "Let's move on."

Let's eliminate all that? Harris tried to walk that back, but she went too far.

It is a disaster for her. But a rival for the Democratic nomination, Sen. of , is worse off. Warren finally and formally hammered the Faux into her own Fauxcahontas narrative.

The reported that Warren had identified herself as "American Indian" on a 1986 registration for the state bar of , though she was not Native American. She foolishly took the infamous DNA test that proved she's no more Native American than my late Sicilian father-in-law.

Warren had insisted she didn't use her "minority" status to climb the career ladder.

Ah, but of course she did just that. She danced the dance of race and favor. She didn't check her privilege. Instead, she checked the box that said minority.

Democratic Gov. , who won office accusing his opponents of racism, apologized for being in a racist medical school yearbook photo. Then he said he wasn't in the photo but had worn blackface for a dance contest in the 1980s. He almost moonwalked for reporters until his wife stopped him.


Then Attorney General , a Democrat, admitted he, too, wore blackface in the' 80s. And the beneficiary of all the chaos, Democratic Lt. Gov. , was ready to succeed Northam when he was accused of sexual assault.

When Supreme Court Justice was dragged through the mud in his bloody confirmation hearing, unfairly accused without evidence of being a sexual predator, and media allies shrieked that we had to believe the women making the accusations.

But are insisting that Fairfax's accuser be believed?

The talk of wearing blackface has all but covered up something else that Northam, a pediatrician, said about aborting a child who had been delivered.

A discussion. You mean the discussion that America isn't having about the value of human life.