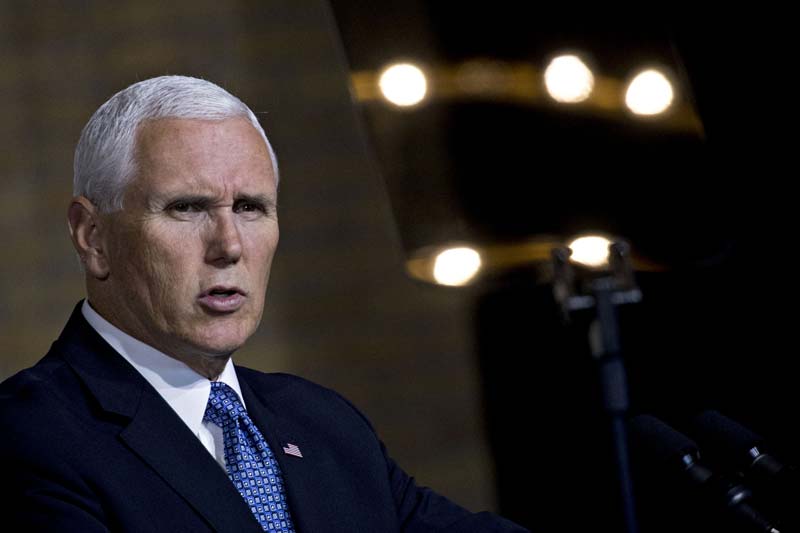 Accompanied on his trip by Sen. Tim Scott, R-S.C. - the lone black Republican senator who has criticized Trump in the past on race issues - Pence assured local faith and business leaders that the administration is committed to bolstering development in places like Columbia, where a shuttered movie theater was reopened last month as part of the "opportunity zone" program.

"You're all coming back," Pence said encouragingly before a crowd of about 100 people at The Meeting Place Church of Greater Columbia, a predominantly African-American congregation that owns the nearby movie theater property.

Pence also heaped praise on Scott, who in 2017 called Trump's response to the deadly white-supremacist rally in Charlottesville, Virginia, "sterile" and met privately with the president at the White House to discuss his concerns.

Pence told the crowd that Trump spoke with him and Scott by phone as they traveled to the church, and Pence said he has had a "bond" with Scott going back to their first meeting years ago when Scott was a state lawmaker. They later overlapped in the House and became friends, Pence said.

"I was for Tim Scott before it was cool," Pence said.

Pence's efforts here went beyond overtures to Scott. In his speech, he spoke admiringly of Black History Month, which is being celebrated nationally. Wearing a red, South Carolina-themed tie, Pence talked with a small gathering of African-American officials and pastors.

And during the church tour, he and his wife, Karen, huddled with a group of gospel singers, who gave the couple an impromptu and enthusiastic vocal performance of a song called "Great Is Your Mercy."

Scott did not acknowledge his past tensions with the administration as he and Pence toured the church and appeared together onstage and at a business roundtable - and instead focused on his advocacy for opportunity zones.

"There are places in our nation where the recovery has been uneven," Scott said.

Pence's upbeat pitch on Thursday was in line with a series of recent speeches he has made, selling the Trump administration's policies to audiences that have pockets of skepticism or outright hostility, such as last week's annual Munich Security Conference, which brought together many U.S. allies in Europe who are wary of the administration's foreign policy approach. Pence's remarks there were met with a cool response as he spoke of Trump's "America First" worldview.

The "opportunity zones," which were a provision in the tax cut bill that passed last year, have been viewed dubiously by some economists. Investors who pour money into one of the 8,000-plus zones nationwide receive a tax break on capital gains, but it is debatable whether that break is necessary or even helpful in certain areas.

"Some high-profile zones were poorly chosen, raising the risk of subsidizing places that are already on a stable footing," Jared Bernstein, a former economist in the Obama administration, wrote last month in The Washington Post.

Many Wall Street firms, buoyed by stock-market gains over the past year, have expressed enthusiasm for the provision as a means of expanding their footprint into new cities and towns with enticing tax benefits, all while polishing their image.

Trump administration officials have said further guidance and rules for the program will be unveiled in the coming months.

Scott was one of the provision's main proponents during last year's negotiations and urged both Democratic and Republican lawmakers to support the proposal, working closely with Trump's daughter and senior adviser, Ivanka Trump.

Pence mentioned Kemp in his remarks at the church and later at the business roundtable meeting, calling him a "mentor." Kemp was also known for calling on Republicans to make inroads with minority communities by underscoring entrepreneurism and economic growth.

Democratic presidential candidates have sharply criticized the Trump administration's economic policies this week and argued that it has neglected poor and minority Americans with its sweeping tax law. Some 2020 hopefuls have also called Trump racist, including Sen. Bernie Sanders, I-Vt., who launched his latest bid for the White House on Tuesday.

South Carolina is likely to be a political battleground next year despite its GOP leanings. The state's 1st Congressional District, now represented by Rep. Joe Cunningham, D-S.C., is already a target for national Republicans as they attempt to win back the House, following Cunningham's victory last year in a traditionally Republican seat.

Former state Democratic Party chairman Jaime Harrison announced in early February that he is exploring a bid against Sen. Lindsey Graham, R-S.C., the chairman of the Senate Judiciary Committee. Graham is up for reelection in 2020 and is one of Trump's high-profile allies. Senate Minority Leader Chuck Schumer, D-N.Y., and other top Democrats have encouraged Harrison to run.

Harrison said in an interview this week that the Trump administration could face new vulnerabilities in this ruby-red state due to its trade and economic policies.

"I hope local business folks and farmers affected by the tariffs get a chance to complain about how they're crippling business in South Carolina when the vice president visits," Harrison said. "It's hard enough to get business to come here and our representatives in the Senate aren't pushing back at all. They're more interested in getting tea time with the president."