Howard Schultz's campaign about nothing 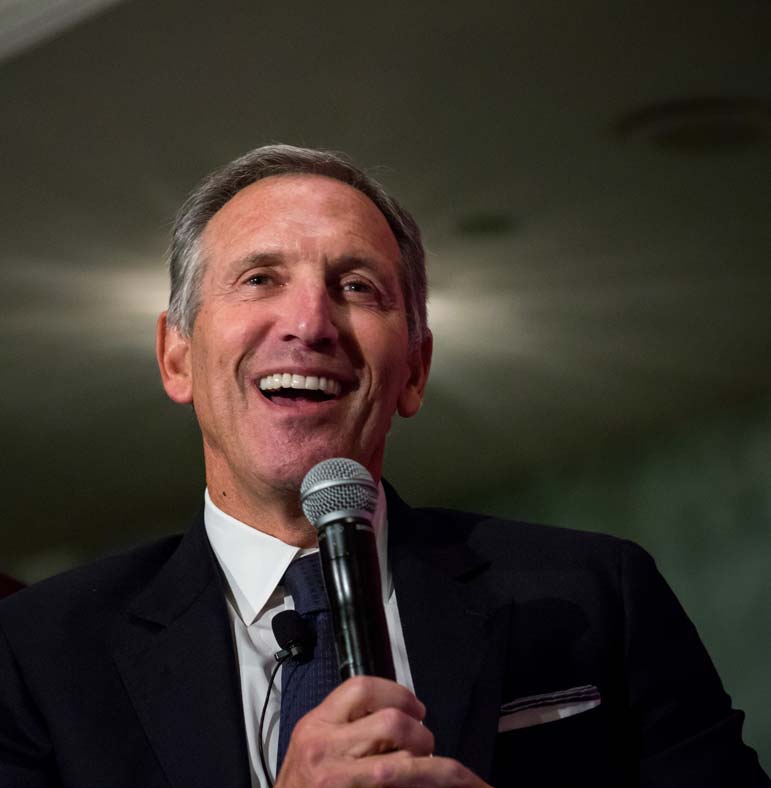 At the start of the town hall CNN gave Howard Schultz on Tuesday night, anchor Poppy Harlow promised, "We're going to talk about all the issues, because that's what this is about."

Unfortunately, Schultz spent the next hour studiously avoiding taking a position on much of anything.

The former Starbucks CEO and potential independent presidential candidate's performance was almost a caricature of an independent candidate trying to say nothing except that the two major parties were doing it wrong. Harlow, to her great credit, repeatedly noted that he was skirting the questions and not talking about his own proposals.

But Schultz would not be deterred from his anodyne generalities and platitudes. The guy who recently told CNBC that he didn't "want to talk in the hypothetical about what I would do if I was president" very much stuck to that line.

When he was asked what he would do about climate change, he almost immediately shifted to attacking Rep. Alexandria Ocasio-Cortez's (D-N.Y.) "Green New Deal" as pie in the sky. "Let's be sensible about what we're suggesting," he said. "Let's not just throw stuff against a wall because it's a good slogan or we get a press release."

He declined, however, to offer up any of his own proposals.

On taxes, he said he was in favor of higher taxes on wealthy people like him. But how much higher? He wasn't sure. "I don't know what the number is," he said twice as Harlow sought even just a "ballpark" figure. He attacked Ocasio-Cortez's idea to tax income beyond $10 million at 70 percent as a "punitive number." Eventually Harlow asked him "is it higher than 2 percent more, for example?" Schultz finally committed, sort of: "I think it is."

Asked whether China was an ally or an enemy, he chose neither but attacked President Donald Trump's trade war. Asked what his illegal immigration plan was, Schultz attacked Democrats for wanting to abolish ICE and Republicans for separating families at the border, but he committed only to a path to citizenship.

On health care, Schultz attacked Republicans for going after Obamacare and Democrats for wanting Medicare-for-all, but all he would propose is more competition, easy access to care and cheaper prescription drugs. Those are all things that people like. In fact, they're all goals Trump has advocated. But they're goals, not proposals.

"How, specifically?" Harlow prodded on health care policy. "Because I think so many people here hear that, but they say that is what Congress has been trying to do or talking about doing?"

Schultz's response: "Respectfully, it's not what Congress had been trying to do." But he didn't say what it should be.

The most telling exchange might have been on the Veteran Affairs Department. Schultz described it as a bloated, inefficient $200 billion bureaucracy and promised he would do everything he could. But he didn't actually say what that was. And Harlow called him out:

HARLOW: "Mr. Schultz, you have diagnosed a problem. It's a problem we all know exists, and it's a tragedy and a travesty. What would you do to fix it?"

SCHULTZ: "OK, what - what I would do to fix it, first off, is diagnose the problem. And diagnosing the problem is that we have layers and layers and layers of government bureaucracy. No one knows who's in charge. There's no transparency of records. Veterans are waiting weeks and months for prescription drugs. There's all kinds of problems.


"You have to put the quality people in charge with accountability to the president. The president of the United States is not concerned about the VA That is not what he's worried about. He talks a great deal about his support of veterans, but doesn't do much other than when the cameras are on.

"I will fix the VA, because it's about leadership, it's about character, and it's also about the temperament of humility to listen to people who are smarter than you, who have more experience than you, to help solve this problem.

"So it's really about leadership. It's about character. And it's about results and accountability. I will be accountable. And I - if I run for president, I promise you, I will fix the VA."

Leadership and accountability. Why hasn't anybody thought of this before?

It's no secret that politicians strive to avoid the questions they are asked. Taking a firm stance means potentially alienating supporters. So when you can speak in generalities about your goals and avoid proposals that might come back to bite you, you do it.

But there's a difference between skirting really tough and divisive issues and basically having no guiding principle or message. Perhaps we shouldn't expect Schultz to have all this stuff nailed down, given that, as he noted, he only dipped his toe in the water a few weeks ago. But you'd think he would have some sense of what he'd like to do. What we saw Tuesday night were almost purely buzzwords along with policies that he opposes.

To sign up for an hour-long CNN town hall about the issues and then not really talk about how you would address them is a pretty bad omen for a potential campaign to come.