In Gridlocked Washington, Time For A Spin Down Constitution Avenue 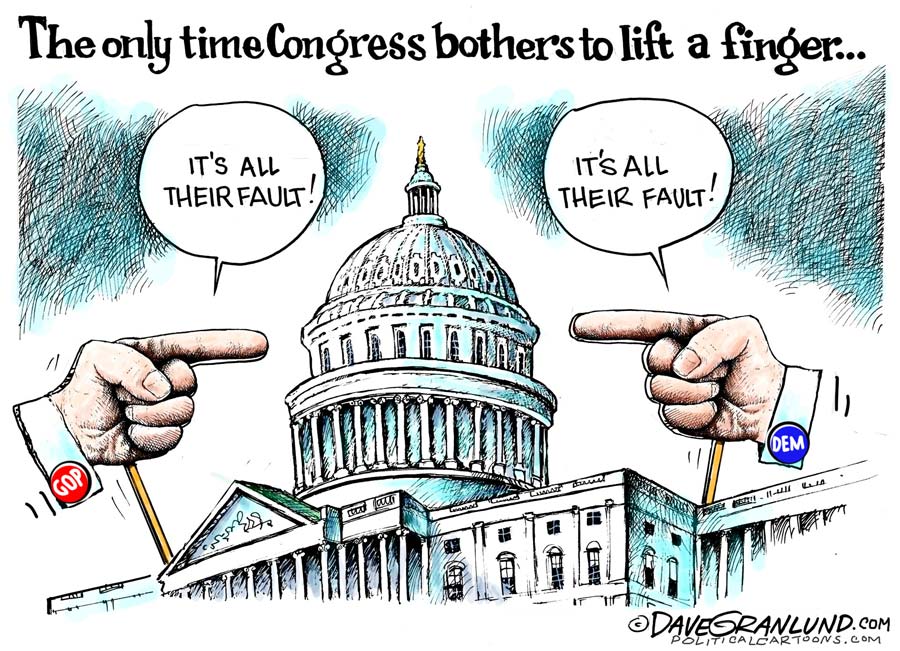 President Trump's speech at the Conservative Political Action Conference offered (predictably) a large slab of red meat — especially when the President drifted into the topic of illegal immigration.

Trump evoked "ICE officers arrest[ing] more than 100,000 criminal aliens who have committed tens of thousands of crimes". Democrats, he said, "voted in favor of sanctuary cities. In other words, they voted to protect criminal aliens instead of voting to protect the American citizens."

As for who's allowed to enter America, Trump said: "I want people coming into this country based on merit . . . I don't want people who drive a car at 100 miles an hour down the West Side Highway and kill eight innocent citizens and destroy the lives of 14 more."

Welcome to the great immigration impasse of 2018, which Congress will return to once it's run its course on school shootings.

The divide: for Trump, it's the illegality of the matter — borders trespassed, crimes committed, criminals coddled. Democrats, meanwhile, try to invoke nobility — a perilous struggle across the border in search of a better life; hard-working men and women making slave wages; aspiring "Dreamers" who should be the backbone of a 21st Century America.

The question: will either side modify its rhetoric in this election year? There's an argument to be made that neither party's base — Democratic or Republican — will abide by an immigration compromise. They'd rather wait to see if the November vote vindicates their stubbornness.

But let's suppose congressional Republicans wanted to show some nuance. If so, here's a suggestion: start talking about the Constitution. In particular, the 14th Amendment and Article II, Section 1, Clause 5.

About the 14th Amendment: 2018 marks the 150th passage of this statute, which clarifies that all persons born or naturalized in the U.S. are naturalized citizens — a legal necessity given the fear that southern states might try to deny citizenship status to emancipated slaves (the actual words: "All persons born or naturalized in the United States, and subject to the jurisdiction thereof, are citizens of the United States and of the state wherein they reside").

What the amendment didn't take into account: illegal immigration and the possibility that a non-citizen could give birth to a child who instantly became a citizen — that child becoming the "anchor" for the extended family staying in the U.S.

The issue emerged during the summer of 2015 when Jeb Bush (ironically, a presidential contender who built his campaign on his sympathy to the immigrant cause) invoked the phrase — and then dug a deeper hole for himself by talking about the matter as more of an Asian-related problem.

Congressional Republicans could start a public dialogue on the 14th Amendment, but it would be wise to pair it with another rule of a bygone era: Article II, Section 1 and presidential eligibility (the language: "no person except a natural-born citizen, or citizen of the United States" — a valid concern when the Founding Fathers feared a European-born puppet ruling the country").

Why this reform? Because of the "Dreamer" debate. If, eventually, young undocumented immigrants are granted citizenship (one of several scenarios), it's a cul-de-sac as far as political aspirations are concerned. An immigrant citizen can run for city council or mayor or Congress or governor, but the presidency is off limits thanks to constitutional restrictions.

Republicans should call for a change to that.

Consider the case of Arnold Schwarzenegger, who was drawn into this conversation while he governed California. Born in Austria in 1947, Arnold moved to the U.S. in 1968. In 1983, he became a U.S. citizen. Had Schwarzenegger been eligible to seek the presidency in 2008, he would have done so as one-part Austrian and two-parts American given his 61-year timeline. I'd add: decidedly American given his embrace of capitalism and Western culture.

Conservatives could extend an olive branch to America's immigrant community with this message: if you've worked and sacrificed to become an American, we believe you should be entitled to hold the highest office in the land (I'll leave it to lawmakers to figure the formula for eligibility -- 20 years as a citizen; a majority of one's life as a citizen, etc.).

There's one more constitutional move that the GOP should consider while it still has control of Congress: a constitutional Regulation Freedom Amendment that would permanently require new major federal amendments to be approved by Congress prior to taking effect.

Of Trump's various accomplishes in his first presidential year, one of the more substantive isn't what he did, but what he undid. Per my Hoover colleague Adam White, "the White House's Office of Information and Regulatory Affairs reported that in 2017 federal agencies "withdrew or delayed 1,579 planned regulatory actions." Specifically, 635 regulatory initiatives previously announced by agencies had been withdrawn from the "Unified Agenda," a semiannual White House report of the government's pending regulatory activities; another 700 initiatives were downgraded to "Long Term" priority; and still another 244 regulatory initiatives were downgraded to "inactive" status."

That's progress — and music to the ears of the Trump base. Republicans should play that up by pitching the constitutional restriction.

Would it ever see the light of day? Good question.

Some constitutional amendments are mercurial (it took less than 10 months, 85 years ago, to ratify the 21st Amendment repealing the 18th Amendment's ban on liquor). Other amendments move likeÂ molasses (the 27th Amendment, which deals with congressional salaries, took nearly 203 years from proposal to ratification).

Passage of a constitutional amendment in today's Congress would seem difficult, given the failure to reach two-thirds majorities on matters that aren't mundane.

However, there could be momentum outside the beltway. At present, 32 states have Republican legislatures. Another three (Colorado, Connecticut and Maine) are split. Add unicameral Nebraska and that's 36 states that might interested in such an amendment — just shy of the two-thirds threshold.

Talking about constitutional amendments may seem an academic exercise, but it does speak to a reality: politics at the federal level are cyclical. Congress has changed hands with alarming frequency in the past 25 years (perhaps it will again in 2018). If the two-term presidential pattern holds, a Democratic White House will take effect in January 2025.

One of its first orders of business for that new administration: restoring regulations imposed by the Obama presidency and undone by Trump's.

Unless someone can take away that power beforehand.Â