Mitt Happens --- So What Happens Next? 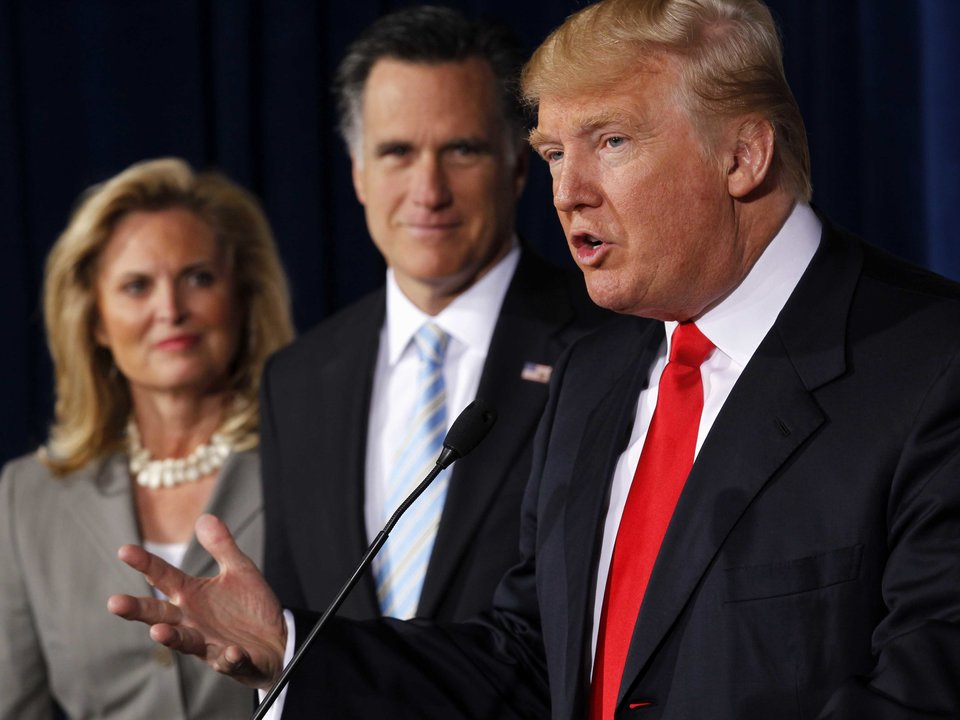 It's a reminder that F. Scott Fitzgerald didn't write the book on life after presidential politics â€“ there are second acts. Here are a few of them: Dewitt Clinton, in 1812 the runner-up to James Madison, later becoming governor of New York. Henry Clay, 1844's loser, later taking up residence in the U.S. Senate. John C. Fremont, the loser in 1856, later becoming governor of the Arizona territory.

Romney's new career path isn't entirely unprecedented, though there are important nuances. Clay and Humphrey, for example, were creatures of Congress returning to a prior existence. Clinton was a native New Yorker, so his new job meant a trip north to Albany.

Romney, on the other hand, is running for the first time in Utah (he relocated there five years ago, building a home in the foothills of the Wasatch Range). Moreover, Romney's never served a day in Congress. His campaign resume: presidential runs in 2012 and 2008; one term as governor of Massachusetts that ended in 2006; a failed Senate bid versus the late Edward Kennedy in 1994.

If you want to listen to someone's who privy to the inner workings of Romney's political world, here's a Hoover Institution "Area 45" podcast I recorded with Lanhee Chen, Romney's chief policy aide in 2012.

The C Word. In Senate races, it's "carpetbagger". In 1964, Bobby Kennedy had to deal with the question of why, as the son of a family famously associated with Massachusetts, he had decided to set up shop in New York. Hillary Clinton likewise had to explain her newfound love of New York when she too ran there in 2000 (ironically, for the same seat RFK once held).

Romney will face criticism that, while he's resident of Utah, he's not really of Utah despite his Mormon faith and record as the rescuer of the 2002 Winter Olympics in Salt Lake City. Indeed, Democrat Jenny Wilson wasted no time posting this ad on social media portraying Romney as an out-of-stater.

For Romney, there's an easy two-word rebuttal: Orrin Hatch, the man he hopes to replace and who's stepping down after 42 years in the Senate.

If pressed, Romney should mention that story. As he turns 71 next month, he also can promise that it won't be a 42-year stay.

His Role In Washington. Not to get too far ahead of the game, but let's assume that Romney does succeed Hatch. What happens when he arrives in Washington? At present, Orrin Hatch serves on three committees: Finance (he's the chair); Judiciary (he's a former chair); Health, Education, Labor & Pensions (also a former chair). Romney probably could choose from any of those (presumably, tax-writing Finance would be the most attractive). Other possibilities: Foreign Relations (the retirements of Bob Corker and Jeff Flake create two openings); Energy and Natural Resources (Flake's departures leaving an opening).

Another interesting aspect of a Romney Senate tenure: the staff he'll construct.

Watch for the Romney office to likewise become a pipeline for young Republican propeller-heads looking to get their feet in public policy.

His Media Role. Prepare for more stories like this one about Romney picking up where the ailing John McCain is leaving off as President Trump's chief critic in the Senate.

There's a history here. Romney called Trump "phony" and "a fraud" in this 2016 speech. Trump, in turn, called Trump a "stiff" and a "catastrophe" (here's a list of 10 insults they've exchanged).

Yes, the two did have dinner during the post-election transition and Romney was mentioned as a contender for Secretary of State. Then again, Trump tried to convince Hatch to seek an eighth (you read the correctly) six-year term.

If Romney wants to take shots a Trump, he won't lack for opportunities. But let's take a look at the big picture: Romney's isn't new to national politics. He's disciplined and won't become besotted with the Washington press corps. As evidence, consider the uniformity of his announcement, with the candidate and his surrogates all stressing that it's Utah first and not a preliminary to some other venture.

The 2020 Race. If elected, Romney could be a big player in the next election cycle â€“ not as a presidential candidate, but perhaps as chairman of the National Republican Senatorial Committee.

On paper, it's the perfect job for someone of Romney's stature as it involves candidate recruitment and raising vast sums of money.

But before you assume Romney would emerge as a primary challenger to Trump, consider the success rate of such an undertaking.

In 1992, Pat Buchanan didn't carry a single primary state and earned only 18 delegate votes to 2,163 for President George H.W. Bush. However, Buchanan's 23% of the primary made him a steady nuisance â€“ good enough to earn a speaking slot at the convention, but nowhere clear close to toppling the incumbent.

If the intention is to deny Trump a second term, a more practical approach would be a third-party run in the general election â€“ ideally, a former Republican. And that sounds more like Ohio Gov. John Kasich, not Romney. It means that Mitt Romney won't be left out of the 2020 gossip mill.

But he's not necessarily the cure for what ails never-Trumpers.