Opponents of gerrymandering keep winning, but it might not affect 2018 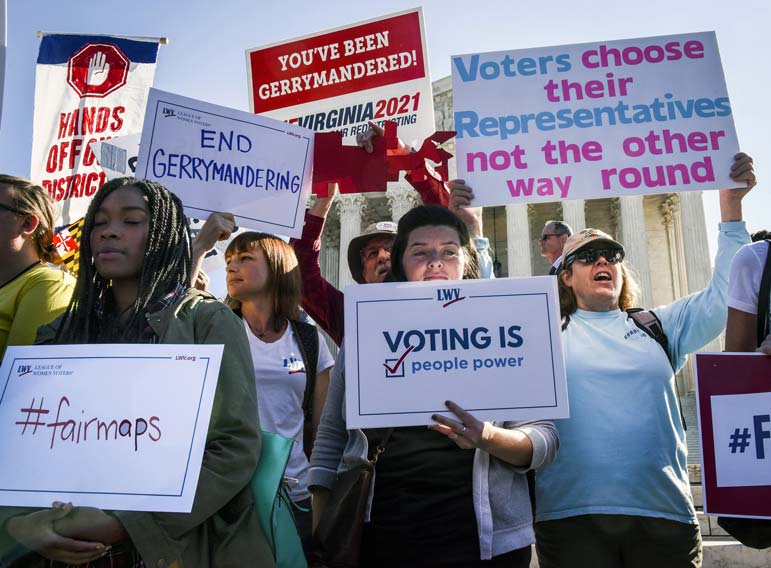 Opponents of gerrymandering have won a historic string of victories in the courts recently, yet millions of voters will cast their ballots this fall in districts that judges have declared to be unconstitutional.

Federal courts in Texas, North Carolina and Wisconsin found that either politics or intentional discrimination played an unacceptable role in drawing electoral lines and ordered new districts in place for the 2018 elections.

But the Supreme Court stopped them all. The justices are traditionally reluctant to order changes in an election year, for one thing. And they have never thrown out a state's redistricting plan because they found it so infected with partisan bias that it violates voters' constitutional rights.

Unless and until it does - the subject is under review at the high court - the justices have routinely told states found to be offenders that they do not have to immediately redraw the maps, which almost surely means they won't be in place for the 2018 elections.

The Supreme Court's action has been frustrating to lawyers involved in the years-long litigation. "A single election under an unconstitutional map is one too many," Ruth Greenwood, senior legal counsel at the Campaign Legal Center, said after the court said North Carolina did not immediately have to redraw its congressional map.

The most consequential of the stay requests is at the Supreme Court right now, and the decision could play a role in determining which party controls the House after the November midterm elections.

The Pennsylvania Supreme Court last month ruled that the congressional map drawn by the Republican legislature in 2011 "clearly, plainly and palpably violates" the commonwealth's constitution. It demanded a quick redrawing of the lines so that 2018 elections could be held in fairer districts.

Pennsylvania's Supreme Court justices are elected, and with Democrats in the majority, voted along party lines in demanding a change to the districts. Republicans hold 13 of the 18 congressional seats in what is usually considered a swing state. The ruling gives Democrats a chance to win more of those seats as they try to tip the balance in the House.

But Republican legislative leaders in Pennsylvania have asked the U.S. Supreme Court to put the decision on hold. And other Republican-led states told the justices they should refrain from ordering new districts anywhere, even if they find later this term that there is a way to gauge extreme partisan gerrymandering.

"Put simply, there is no need to hurry," said an amicus brief filed by Republican officials in Alabama, Arizona, Arkansas, Kansas, Missouri and South Carolina. They note that the 2020 Census will require new lines to be drawn nationwide anyway.

Those who have challenged what they consider racial and partisan gerrymanders say they would be surprised if the Supreme Court intervened in the Pennsylvania case, because itinvolves a state court interpreting its own constitution.

"The Supreme Court's duty is to say what the law is, but only federal law," said Justin Levitt, a professor at Loyola Law School in Los Angeles who runs a blog about redistricting and worked on the issue at the Justice Department under President Barack Obama.

Levitt was involved in the case inTexas, which gained four congressional seats in 2010 as a result of population growth. Though that growth was fueled by increases in its minority populations,the Republican legislature drew a map in which white Republicans were elected in three of the new districts, and the lines have been embroiled in court battles the entire decade.

A lower court overseeing the redistricting cases last year called for a special session of the Texas Legislature to redraw the electoral lines. But Texas went quickly to the Supreme Court, saying it would be a waste of time if the Supreme Court ultimately held that the districts did not have to be redrawn.

By a 5-to-4 vote in September, the Supreme Court said the redrawing could wait, meaning all of the congressional elections of this decade in the state will take place under a plan judges have criticized.

"Justice delayed is justice denied, and that's a lot of delay," said Levitt.

The Texas case was about racial gerrymandering. Partisan gerrymandering was the reason lower courts invalidated the congressional map in North Carolina and a state legislative map in Wisconsin.

The Supreme Court granted Wisconsin's request not to draw a new map while the justices considered the merits of the case. The justices held oral arguments in October but have not ruled. In the meantime, it has accepted a second case from Maryland, which will be heard in March.

"It makes no sense whatsoever to force North Carolina to immediately remedy a purported partisan gerrymandering violation and commence its 2018 election cycle under a new court-imposed map before this Court can even decide whether and under what circumstances such claims may be adjudicated," they wrote.

Usually, the high court takes a hands-off approach when a state's highest court interprets its own constitution. But Pennsylvania's Republican legislative leaders say, just as the court decided to reverse the Florida Supreme Court in Bush v. Gore, that there is a federal issue at stake also.

The Constitution's Elections Clause provides that the "Times, Places and Manner" of congressional elections shall be decided by the "legislature" of each state, or by Congress. That leaves no room for the Pennsylvania Supreme Court to usurp the legislature's power under vague interpretations of the state's guarantees of free speech and equal protection, they say.

The court's 5-to-2 ruling was not accompanied by a detailed opinion, which it said would come later.

"For the first time in United States history, a state court, in attempting to play the role of 'lawmaker,' has invalidated a congressional districting plan without identifying a violation of the U.S. Constitution or a state constitutional or statutory provision providing specific redistricting criteria," the GOP leaders told the court.

But the League of Women Voters of Pennsylvania, one of the challengers to the plan, told the court in its response brief that the Supreme Court on numerous occasions has said the meaning of "legislature" in the Constitution is not so literal.

To rule for the commonwealth's legislative leaders, "this Court would need to overrule no fewer than six of its precedents, all upholding the power of state courts to review and remedy unconstitutional congressional districting plans," the group's brief said.

It added: "Their stay applications are just a ploy to preserve a congressional map that violates Pennsylvania's Constitution for one more election cycle."

Even if the effects are not seen in the 2018 elections, opponents of partisan gerrymandering are encouraged by the recent victories and the Supreme Court's surprise decision to add the Maryland case to its docket.

The justices in the past have agreed that partisan gerrymandering can be unconstitutional but have never agreed on a way for courts to measure when it goes too far and they should get involved.

"The fact that they took a second case" makes it more likely that the court is serious about finding a way in which courts can determine when partisan gerrymandering becomes too extreme, said Washington lawyer Paul Smith, who argued the Wisconsin case earlier in the term.