After Florida, politics and the clash of death cultures 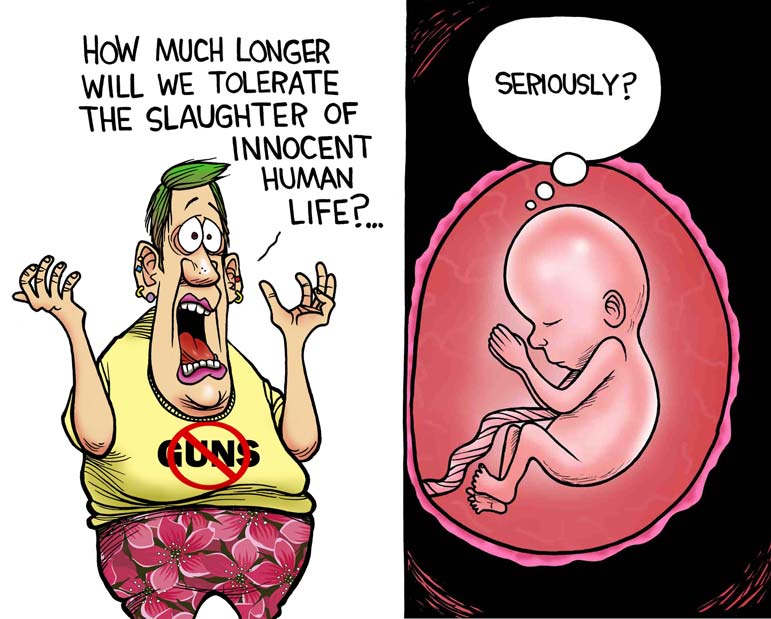 , the Democratic senator from , a former prosecutor, may one day be her party's nominee for the presidency.

And in the aftermath of the tragedy at -- where 17 students were killed by a madman with a gun -- Harris said something quite profound.

"This cannot be a political issue. We have to have smart gun safety laws -- our babies are being slaughtered," Harris tweeted.

It was a slaughter. It was preventable. The was warned at least twice that the shooter was dangerous, mentally unstable and armed. And to its shame, the failed miserably to act.

The political left, to which Harris belongs, seeks political advantage in public grief, and has vigorously condemned those who support the Second Amendment as being part of a culture of death.

And is adding leverage, as , the star, and his wife, Amal, announced they will donate $500,000 to the March for Our Lives demonstrations for gun control.

It's all being sold this way: as a battle of rights, between the right to bear arms and the rights of the students to life as America approaches the 2018 midterm elections.

And those who don't quickly move to "do something" to weaken the Second Amendment are vilified as moral cowards, as gun nuts in support of the death culture.

Yet there is another culture of death. It is a culture where the lives of other innocent children are also taken -- you might say they're slaughtered -- every day.

Estimates suggest there have been between 50 million and 60 million abortions since the Supreme Court decided Roe v. Wade in 1973.

And if 50 million to 60 million souls are not evidence of a culture of death, I don't know what is.

By and large, in media and assisted by their liberal celebrity allies, the left controls not only the terms of debate, but also the tenor and tone. Those condemning the right to bear arms are given great license, and it all gets funneled into the social media echo chamber.

And those who oppose abortion are quickly marginalized by the left, and mocked on TV as the crazy people who listen to Jesus.

Abortion rates have dropped in the , yes, but thousands upon thousands of the unborn are removed from their mothers every year. And some have ended up in those videos about that were roundly condemned by and pundits.

I'm not going to change your minds over abortion or guns. We're locked into our positions, and we tend to shame those who get in our way. That's politics too.

The left vilifies the as agents of murder and the politicians it supports with donations as puppets of death.

The right points out (although you don't much see this in the news) that abortion rights groups such as contribute millions of dollars to to protect that death culture.

And somewhere in the middle are the American people, seeking commonsense answers on guns and abortion.

Perhaps those who are on pharmaceuticals to control their depression or other mental illness should be prohibited from owning guns, or even from driving, since we now see that vehicles can be deadly weapons. Some people simply stop taking their meds and pose a danger to others. Yet I'm told my idea lacks common sense.

But there is a commonsense idea from in the that many and might support: GVROs, or gun-violence restraining orders.

GVRO bills are coming up through the states. Ideally, a GVRO would permit parents, spouses, siblings or others living with a mentally unstable person to seek a court order allowing law enforcement to temporarily take that person's guns away.

It would protect the rights of the individual by allowing him or her to contest those claims, and set a time limit that would expire, unless the petitioners provide additional evidence.

That seems reasonable, doesn't it?

Now what about applying common sense to abortion?

One idea involves the phrase hated by the left, "fetal viability."

After 20 weeks, a mother can see her baby on an ultrasound. Fathers, too.

Parents can see the face and the hands and the beating heart of their child. Once they see this, what they're looking at is not some collection of tissue. It is a life. And advances in medical science have made it possible so that some babies born prematurely can live out of the womb after 22 weeks.

pushed an abortion ban after 20 weeks in the . Given the new science about viability, that seems reasonable, too, does it not? But killed the bill in January and made opposition to a 20-week ban a rallying cry.

"Women have the constitutional right to make their own decisions about reproductive health," tweeted. "It shouldn't be infringed upon. Get out your bullhorns. Everyone should be shouting about this."

In the battle of rights, whose life is protected, whose rights are suspended?

Those high school students in had a right to live, yes, but what about the lives of millions of unborn taken in abortions?

We're all shouting now, aren't we?