Bill Clinton, the nobody nobody sent 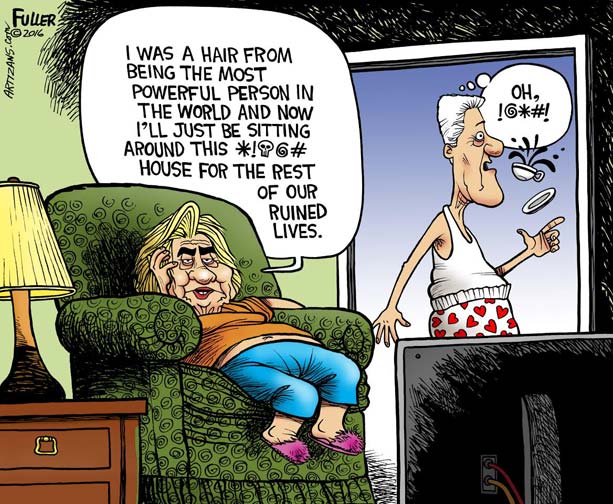 have a saying about unwanted help who may want to wet their beaks in the trough of public service:

"We don't want nobody nobody sent."

And former President is now that nobody.

National hugged him as recently as the 2016 presidential campaign, when he was surrogate zero. Now they don't want him anywhere near the 2018 congressional midterm elections.

How can you have Bill around while you reach for that weaponized #MeToo movement and rewrite your history? It would be so awkward.

Politicians don't want voters to realize that those who shout the loudest often sip their hypocrisy quietly, through a straw.

Lujan is in the job Clintonista and Mayor once held, back when Emanuel would send dead fish to his political enemies.

"As we travel around the country ... different candidates are going to be making requests for different surrogates," Lujan was quoted as telling reporters when asked about Bill and 2018.

In politics, what politicians say isn't the story. What they don't say is instructive. And Lujan's pointed avoidance of Clinton's role is deafeningly loud, like the silent scream in the Edvard Munch painting.

Yet little more than a year ago, when then-Republican presidential candidate was accused of sexual assault, or at least was caught bragging about grabbing women by the genitals on that revealing "Access Hollywood" video, thrilled at Clinton's approach.

Even future #MeToo leaders like Sen. of sang Clinton's praises.

Now, though, you can't very well have a former Democratic president who put his hands on women in the , and who allegedly raped a woman as attorney general (and told her afterward to fix her face), anywhere near 2018.

But that's just the pimple, not the infection itself.

What don't want to deal with is how they rationalized it all. Clinton offered what they wanted: protection of abortion rights and access to power.

And with the #MeToo movement in their hands, they find their own history so embarrassing they must rewrite it before selling a new script to voters.

The #MeToo movement is too important to be diminished by partisan politics, but that's what's happening.

No woman should have to deal with sexual harassment or assault.

And no man should be allowed to make public policy after allegedly battering a woman, as , staff secretary at the , was allowed to do for months before recently resigning.

Still, you can see how #MeToo is being enveloped by . It is the 2018 version of the "Year of the Woman," the feminist slogan that played so well with suburban soccer moms and leveraged into the years ago.

Only then did Bill reach for Monica and the cigars.

Feminists and others of the left protected him, arguing that lies about sex -- even under oath -- was just a private matter. Now, of course, it's all a public matter.

Yet back then, liberal writer captured the feminist left in all its glory.

"I think American women should be lining up with their presidential kneepads on to show their gratitude for keeping the theocracy off our backs," Burleigh wrote.

If were truly serious about #MeToo, you'd think they'd hold a public ceremony of exorcism, burning all those kneepads in some giant, quasi-religious bonfire.

"I think it's pretty tough," Rep. , D-, was quoted as saying by , on the necessary distance between the and Clinton.

She is vice chair of the , and a leader in demanding changes in approach to sexual harassment.

Clinton being anywhere near 2018 "just brings up a lot of issues that will be very tough for ," Jayapal said. "And I think we all have to be clear about what the #MeToo movement was."

What it is or what it was?

No political party can corner the market on hypocrisy, and the have plenty to share.

once were adamant that character counts in a president. Now they applaud evangelical clergymen who defend Trump, just as the Nina Burleighs of the left once defended Bill.

And were also once quite worried about that massive government debt that would be left to all those grandchildren.

But it's all water under some bridge the president would build with his trillion-dollar infrastructure plan that America can't afford.

At least outgoing Rep. , the Republican and former federal prosecutor, has his priorities straight.

He wants to know about the and .

He's begun an investigation by the to find out what chief of staff John Kelly and counsel knew about Porter's questionable security clearance.

The has bumbled explanations as to why Porter was allowed to remain at the with only an "interim" security clearance, despite a protective order granted to one of Porter's ex-wives.

"I would want to know from and and anyone else, what did you know, from whom did you hear it, to what extent did you hear? And what actions if any did you take?" Gowdy said on . "The chronology is not favorable for the ."

But as it proceeds, becomes the incredible shrinking man, the nobody nobody sent.