Did The FBI Vouch For The Crazy Russian Deal From The Steele Dossier? 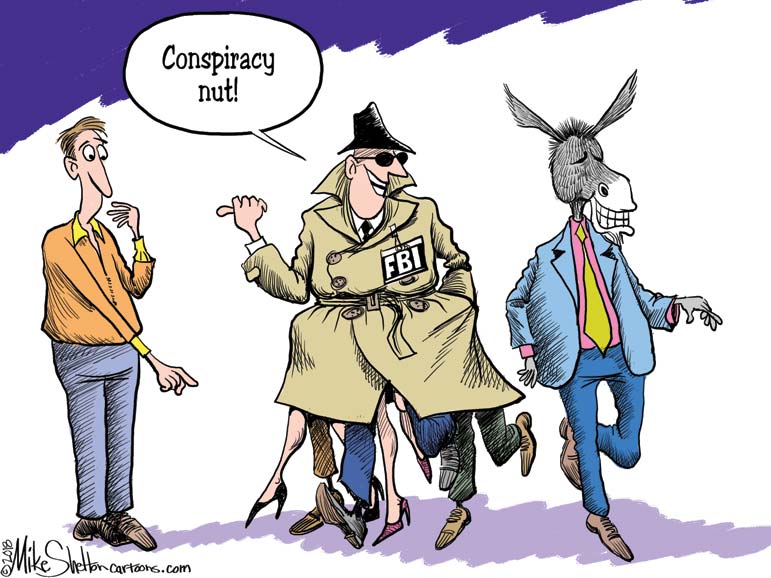 The media's promotion of an unverified dossier against Republican candidate, Donald Trump, failed to cement Hillary Clinton's expected victory in November. If that were the whole story, the dossier would have faded from public view, the new President Trump would not have spent his first year fighting off charges of treason, and a much bigger story would not be getting ready to break.

What we did not know on election day was that the Christopher Steele dossier was bought and paid for by the Clinton Campaign and the DNC, that the dossier itself may have been part and parcel of a Kremlin disinformation campaign, and that a FISA (Federal Intelligence Surveillance) court apparently used one of its most bizarre claims to approve the surveillance of a Trump campaign advisor. We also have learned that the Steele dossier was commissioned by an opposition-research firm — Fusion GPS — that had Russia among its main clients.

In light of these disclosures, investigators must now determine if the leaders of the Democratic Party, not Trump, colluded with the Kremlin to produce what the Russians call "black PR" against Trump.

We can understand if many Trump-haters swallowed the dossier's tales of improbable business deals and fictitious meetings as related by anonymous informants, but it now appears that the FBI used the dossier to obtain a warrant to surveil a member of Trump's campaign team from a FISA court judge. Federal courts should be subject to rules of evidence on hearsay, identification, and authentication, which would seem to nullify the dossier as credible evidence. Federal courts, like FISA, are also not supposed to be swayed by politics and should have the commonsense to recognize nonsense when they see it.

I concluded immediately after the Steele dossier's publication by BuzzFeed in January of 2017 that it was a fake. No source cited in the dossier had been willing to come forward; most of the information is hearsay or even hearsay of hearsay. There is no way that Steele's alleged top-level Kremlin informants would spill the Kremlin's deepest secrets to lowly Steele hirelings. Steele's informants were therefore either fictitious, or low-level poseurs passing on gossip, OR they were doing the bidding of the Kremlin as part of a classic Russian disinformation campaign.

Persistent media efforts to validate the Steele dossier have failed. After an extensive investigation, the Washington Post disguised its disappointment with verbal gymnastics: "Although it's impossible to say that the dossier is entirely inaccurate (there are some glimmers of accurate predictions), it is also impossible to say that it has been broadly validated."

As a matter of fact, the dossier is unverifiable, given the anonymous sources and whether the informants are real people or fabrications. The Steele dossier could not stand up to the most liberal interpretation of rules of evidence. Even more damaging: one of the key verifiable claims of the dossier (that Trump's personal lawyer orchestrated payoffs from Prague on specific dates) has been shown to be false. When virtually everything else is not verifiable or simply made up, the failure of the one claim that can be validated should call into question the entire dossier.

As a last reed of hope, "dossier Believers" argue that the dossier was after all prepared by a master spy — a former MI6 bigwig — whose "trusted compatriots" gathered intelligence from the innermost sanctums of the Kremlin. They do not note that Steele's last tour of duty in Russia was a quarter century earlier. The Christopher Steele of dossier fame was long past his sleuthing days, but was instead a consultant hustling to give his clients the dirt they wanted.

The true story of the Steel dossier appears about ready to break. The House Intelligence Committee voted along party lines on January 29 to publicly release a classified memo detailing that the FBI used the Steele dossier — bought and paid for by the Clinton campaign and the DNC — to obtain a FISA warrant to surveil former Trump foreign policy advisor Carter Page in the campaign's early days.

Any dossier-related FISA warrant to surveil Page would have to be based on the bizarre quid pro quo deal described in the dossier, according to which Igor Sechin (CEO of Rosneft and Putin intimate) offered Page, in July of 2016, a commission on the sale of 19% of Rosneft shares — a bribe of more than a half billion dollars. Russia would get, in return, a softening of the Republican platform on Ukraine arms and an understanding that Trump would lift sanctions on Russia if elected.

Page has denied that the Sechin conversation took place and claims never to have even had a one on one meeting with Trump.

The Sechin deal makes absolutely no sense. At the time of the presumed offer, Trump's chances of winning were remote, and the proposed arrangement could not be enforced by either side. Trump could have taken (and somehow hidden) the money and claimed Congress would not allow him to lift sanctions. The Russians would have to hide Trump's money offshore in accounts of fictitious companies. A bribe of this size would have depleted the cash that Putin desperately needed for military spending and budget deficits, all in return for a promise to lift sanctions if — and what a big "if" — Trump were elected. Rosneft, as a public company, would have to conceal that the U.S. president was a party to this crooked transaction. If we follow the dossier, we are supposed to believe that this astonishing secret happened to be disclosed by Sechin himself to one of Steele's alleged Kremlin sources. Steele wants us to believe that there are a lot of loose lips in Rosneft offices.

Any FISA judge who issued surveillance warrants against Page based on this tall tale would have to have his head examined.

Or did FBI and Justice officials go out on a limb to vouch personally for the Steele dossier and were the FISA courts prepared to accept their assurances? Was the court informed, as George Tenet famously told George W. Bush with respect to Saddam's WMD, that the Sechin-Page deal was a "slam dunk?" Given that the Steele dossier is unverifiable, by design, and the Sechin-Carter deal bordered on the crazy, the only conclusion left is that FBI officials were guided by their hatred and fear of Trump, rather than by adherence to the law. If we cannot trust federal law enforcement agencies â€“ the IRS, the FBI, and the Justice Department — we face a significant domestic crisis.

Paul Roderick Gregory is a fellow at the Hoover Institution, at Stanford, and energy fellow and Cullen Professor of Economics at the University of Houston. I am also a research professor at the German Institute for Economic Research Berlin. My specialties are Russia and Comparative Economics, and I am adding China to my portfolio. I have written more than 20 books on economics, Russia and comparative economics.

© 2020 Paul Roderick Gregory, with permission of the Hoover Institute