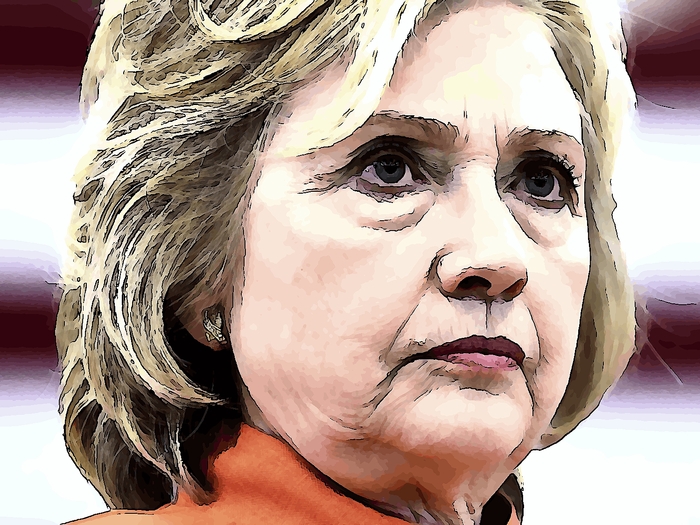 WASHINGTON - There was a long line for selfies with Hillary Clinton last week at a Georgetown soiree for Lanny Davis, a Clinton loyalist whose latest book blames former FBI director James B. Comey for her 2016 presidential defeat.

Clinton devotees - waiting patiently within earshot - speculated about her future. Maybe, one asked, she'd leave political winter behind and become President Trump's foil? Another talked up a 2020 comeback.

Clinton smiled, but did not respond.

In the first electoral season since the stunning loss that extinguished her years-long drive for the presidency, Clinton, 70, has begun a discreet and low-profile reentry into the political fray.

Her emerging 2018 strategy, according to more than a dozen friends and advisers familiar with her plans, is to leverage the star power she retains in some Democratic circles on behalf of select candidates while remaining sufficiently below the radar to avoid becoming a useful target for Republicans seeking to rile up their base.

Most likely, they said, Clinton will attempt to help Democratic candidates who have a history of supporting her and her family, and expending her political capital in a number of the 23 congressional districts she won in 2016 but are now held by a Republican. Lending a hand to Democrats organizing at a grass-roots level is a priority, they added.

Harrison said Clinton told him in December that she was committed to turning out core blocs in the party, such as African Americans and Latinos. "She's saying, 'Listen, I'm no longer running but we need these groups to be strong and people to vote.' "

Within her orbit, there is an emphasis on Clinton moving cautiously rather than making headlines with a flurry of interviews and endorsements, as former vice president Joe Biden, Sen. Bernie Sanders, I-Vt., and others with White House ambitions are doing at this stage.

The former first lady, secretary of state and Democratic presidential nominee, who has been a polarizing political figure for a quarter century, has accepted that Trump and his allies on Fox News Channel will bring her up seemingly daily, almost as though she were president and mired in scandal, her friends and advisers say.

But Clinton's team also understands that, although she remains popular with many Democrats, she could be a hindrance to candidates running in Trump country. Polls show that her overall image has not improved since the election. A Gallup survey in November found that 36 percent of adults viewed Clinton favorably, while 61 percent viewed her unfavorably, her highest negative ratings on record.

"The resistance is looking for the next savior of the Democratic Party and I don't know how much demand [for Clinton appearances] there will be outside of the districts where she beat Trump," said Patti Solis Doyle, who managed Clinton's 2008 presidential campaign.

A Clinton 2020 campaign has been ruled out, although Trump continues to tweet excitedly about the prospect and mentioned her during a January news conference with the prime minister of Norway.

"No, no, no, no," one former Clinton adviser said when asked whether Clinton has privately floated the idea.

There already are signs that Republicans will seek to draw Clinton into the 2018 debate.

In Missouri, a state Trump won, an ad aired by a conservative group seeking to unseat Democratic Sen. Claire McCaskill morphs the two women's faces together as it lists topics on which they agree.

"The reality is Hillary is a nuisance to the Democrats and a gift to Republicans," former Trump aide Sam Nunberg said, noting that GOP groups are building a national effort against another Democratic woman, House Minority Leader Nancy Pelosi of California.

Clinton, who remains frustrated and leery about an election defeat that she and her allies have blamed on Russian interference and Comey's handling as FBI director of an investigation of her email, began appearing in public more often last fall around the release of her campaign memoir, "What Happened."

She spoke then about the need for Democratic supporters to get involved in politics and stand up to Trump - but she signaled that her own involvement would be calibrated.

"I am done with being a candidate," Clinton said on CBS's "Sunday Morning" in September.

These days, Clinton is busy with advocacy work and speeches - including an address last week at Georgetown University on women's rights - and remains tight with the sprawling network she and former president Bill Clinton have cultivated for decades. She has not formally returned to the Clinton Foundation, which has scaled back over the past year, but she assists with fundraising and programs she started.

Various promotional events for her book were ticketed, but she has not been jumping back into the paid speaking circuit, said a person close to her.

Clinton has not been shy about expressing her distaste for Trump, whether it's stopping by the Davis gathering or slyly reading "Fire and Fury," an explosive book by Michael Wolff about the Trump White House, in video aired during last month's Grammy Awards.

Clinton's connection to the #MeToo movement against sexual misconduct has been a topic of debate within the Democratic Party. Last month, she said she regretted not having fired a senior adviser on her 2008 presidential campaign who was accused of repeatedly sexually harassing a young subordinate.

Party leaders, such as Sen. Kirsten Gillibrand of New York , have voiced their concerns about Bill Clinton and how he responded to misconduct allegations in the 1990s, when Hillary Clinton was first lady amid that firestorm.

As Clinton plans for the midterms, she is relying on some of the same advisers who have been by her side for years.

Her confidante Huma Abedin remains a leading force in her decision-making process, although some Clinton allies bitterly blame the 2016 loss on Abedin's relationship with her disgraced then-husband, former Democratic congressman Anthony Weiner of New York.

The FBI's investigation of Weiner, who was sentenced last fall to 21 months in prison for exchanging illicit messages with a teenager, turned up correspondence between Clinton and Abedin that had not been examined previously as part of its broader inquiry into Clinton's use of a private email server as secretary of state and prompted the bureau to reopen the investigation in the final days of the presidential race. Abedin's attorney said in a statement last month that she was finalizing her divorce from Weiner.

Clinton's primary political vehicle is a nonprofit organization and affiliated super PAC called Onward Together, which she created last year and which directs resources to groups aimed at boosting Democratic candidates and turnout.

Even that enterprise is understated. Its website does not feature her picture. Instead, it lists one of her quotes - "Resist, insist, persist, enlist" - and invites visitors to get involved in upstart groups she supports, such as Indivisible and Run for Something.

Federal election filings show that Clinton's Hillary for America political committee transferred $800,000 in May to Onward Together. A person close to the group called it an "incubator" and said it has given out more than $1 million over the past year.

"Putting herself out there isn't the goal," said former Vermont Democratic governor Howard Dean, who works with Clinton at Onward Together. "Neither is thinking about the politics of this or that. What the group focuses on is helping [Democrats] to mobilize and organize" by providing funding and advice.

Advisers say Clinton has made a practice of calling lesser-known Democratic candidates around the country who are viewed as future stars - a way to provide encouragement without making a formal endorsement or participating in splashy events that would indicate her political return.

When Austin Davis won a state legislative seat in a special election in Pennsylvania last month, Clinton called with congratulations, and Davis soon after posted a snapshot of him taking the call.

Atlanta Democrat Nikema Williams, running last year for a state Senate seat, was invited backstage with Clinton and they posed together for a picture - an endorsement in spirit.

"She told me she was proud of me for stepping up to run for office and was watching my election," Williams wrote later to supporters alongside a photo of their hands clasped. "Like Secretary Clinton, my opponent and detractors call me the establishment." Williams ended up winning the seat.

There have been other small gestures. Last fall, the Nebraska Democratic Party chairman asked Clinton to provide signed copies of "What Happened" for a fundraising auction. She quickly signed the books and sent them to Lincoln.

Clinton is considering whether she will make endorsements in the coming weeks in key races in Illinois and Texas, which will hold primary elections in March and where some past supporters are running. Billionaire J.B. Pritzker, the national co-chairman of Clinton's 2008 presidential campaign, is seeking the Democratic gubernatorial nomination in Illinois, and former State Department and campaign adviser Ed Meier is running for a House seat near Dallas. Clinton advisers said that she is friendly with both candidates, and others running in those states, but that no decisions are imminent.

Clinton did briefly praise Pritzker's campaign in a Chicago speech last fall. It was a "shout out" moment his campaign welcomes in deep-blue Illinois, a Pritzker spokesperson said.

Nationally, there are requests from other candidates under review, said members of the Clinton operation. Clinton's campaign email lists have been shared with Democratic Party committees.

Clinton friends expect that she will be an influential figure in 2020 - as a potential kingmaker, or queen maker, in the Democratic presidential scramble.

"There will be a lot of people competing for the same coalition that she had," former Clinton campaign spokesman Brian Fallon said. "They'll want her support."