Bizarro World --- the Comic Book Version and the Real Thing 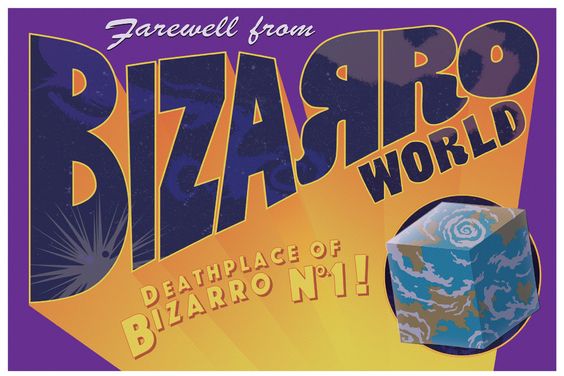 Once upon a time, in comic book land, there was a planet called Bizarro World, a strange place where up was down and down was up and beauty was ugly and ugly was beauty. In one installment, a salesman was doing a brisk business selling "Bizarro Bonds," hawking them to potential customers with this pitch: "Guaranteed to lose money for you."

If in this Age of Trump and his many critics you feel like you're living in a political version of Bizarro World, don't worry. You're not alone.

Remember when it was those noble liberals who bragged about their civil liberties credentials? They were the honorable Americans who railed against the establishment; they were the principled ones who didn't trust powerful government agencies like the FBI, especially when J. Edgar Hoover ran the place and was tracking Martin Luther King's every move.

Now, in political Bizarro World, it's liberals who have become the FBI's most ardent supporters. Now, anyone on the Right who so much as questions FBI tactics or worries about anti-Trump antagonism among some of its agents and higher-ups, is "smearing" the entire agency.

This convenient new outlook by progressives caught the eye of historian David Garrow, a self-described liberal Democrat whose books include "The FBI and Martin Luther King, Jr." He recently wrote in the Wall Street Journal that, "anyone eager to embrace the belief that today's FBI is a rigorously professional and politically unbiased agency is overlooking the facts." And on Fox, he told Tucker Carlson that, "I'm very worried at how people are giving up their principles, their civil liberty principles, because of the intensity of their partisan hatred of Donald Trump."

And then there's Russia, the country Ronald Reagan called an "evil empire" â€“ a blast of un-PC honesty that gave liberals a bad case of the vapors.

Remember that presidential debate in 2012 when Mitt Romney said that Russia was America's "number one geopolitical foe" and President Obama couldn't resist being snarky. "The 1980s are now calling to ask for their foreign policy back because," Mr. Obama said, "The Cold War's been over for 20 years."

That was then. Now, in political Bizarro World, it's the progressive Left that's waging cold war against the Kremlin — because of its meddling in the 2016 presidential election generally, and specifically because progressives are convinced Donald Trump colluded with Vladimir Putin to steal the White House out from under the anointed one who was supposed to win, Hillary Clinton.

And remember when liberals didn't trust the spooks at the CIA either? Remember when anti-establishment liberals believed the CIA was spying on all of us â€“ and it was those nutty conservatives who thought that liberals were more than a tad paranoid?

That also was then. Now it's the Republican president who doesn't trust the intelligence community, who has put the word "intelligence" in sarcastic quotation marks in a tweet — and it's liberals who seem to believe every word the spies say.

Alan Dershowitz, the retired Harvard Law School professor who calls himself a "proud liberal" took aim at the hypocrisy of both sides in an interview on CNN.

"Isn't it ironic that all the liberals are now saying you can trust the national security agency when they tell us there's no wiretapping. You know years ago it was the liberals who would say, â€˜Oh my god you can't trust those guys of course they're wiretapping everybody.' But it just shows partisan politics have become so extreme that liberals give up their liberal perspective, conservatives give up their conservative perspective, everybody just wants to choose a side and whatever side you choose you're just going to come down and say whatever helps your side. It's a tragedy, how dialogue has suffered in this country."

Bizarro World was a shining city on a hill, the very essence of principles and enlightenment