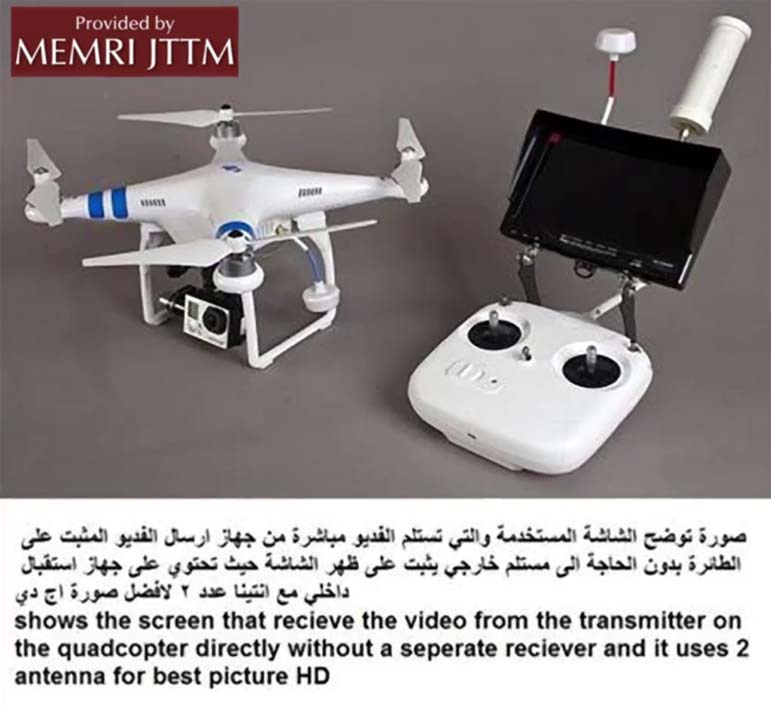 Late last month, a pair of Islamic State fighters in desert camouflage climbed to the top of a river bluff in northern Iraq to demonstrate an important new weapon: a small drone, about six feet wide with swept wings and a small bomb tucked in its fuselage.

The two men launched the slender machine and took videos from a second, smaller drone that shadowed its movements. The aircraft glided over the besieged city of Mosul, swooped close to an Iraqi army outpost and dropped its bomb, scattering Iraqi troops with a small blast that left one figure sprawled on the ground, apparently dead or wounded.

The incident was among dozens in recent weeks in a rapidly accelerating campaign of armed drone strikes by the Islamic State in northern Iraq. The terrorist group last month formally announced the establishment of a new "Unmanned Aircraft of the Mujahideen" unit, a fleet of modified drones equipped with bombs, and claimed that its drones had killed or wounded 39 Iraqi soldiers in a single week.

"A new source of horror for the apostates!" the group's official al-Naba newsletter declared.

While the casualty claim is almost certainly exaggerated, U.S. officials confirm that the terrorist group appears to have crossed a threshold with its use of unmanned aircraft. Two years after the Islamic State first used commercially purchased drones to conduct surveillance, the militants are showing a growing ambition to use the technology to kill enemies, U.S. officials and terrorism experts say.

The threat to troops is serious enough to prompt U.S. and Iraqi commanders to issue warnings to soldiers near the front lines. But a far bigger worry, U.S. officials say, is the potential for future attacks against civilians. Islamic militants have long discussed the possibility of using drones as remote-control missiles that can deliver explosives or even unconventional weapons such as deadly nerve agents. In recent weeks, the notion of terrorist drones has moved a step closer to reality, terrorism experts say.

"They're now showing that these devices can be effective on the battlefield," said Steven Stalinsky, executive director of the Middle East Media Research Institute (MEMRI), a Washington nonprofit that analyzed dozens of incidents for a new report on Islamic militant groups' use of drones. "With the way these groups use social media, my worry is that they're also putting the idea into people's heads that this is something you can now do."

To be sure, the lightweight, relatively inexpensive drones in the jihadists' fleet are nowhere close to matching the sophistication and lethal power of the Predators and Reapers used by the U.S. military. The drones displayed by the Islamic State are too small to carry heavy bombs and rockets, and they lack the guidance systems used by U.S. pilots to steer missiles toward their targets. Still, even a small bomb, such as the three-pound mortar shells typically used against Iraqi government troops, can have an effective blast radius of 30 to 45 feet, enough to kill or injure dozens of people if dropped in a crowded area.

Pentagon officials say the drones have scant military significance and will not affect the Iraqi government's timetable for recapturing Mosul, the northern Iraqi city that fell to the Islamic State in 2014.

"Although dangerous, and effective as a propaganda tactic, it has limited operational effect on the battlefield and will not change the outcome," Air Force Col. John L. Dorrian, spokesman for the U.S.-led coalition opposing the Islamic State, said at a press briefing last week.

But a second Pentagon official acknowledged that coalition troops had been forced to take countermeasures against drones - steps that include early-detection systems and electronic jamming - while also stepping up the search for factories and staging areas where the aircraft are being readied for use on the battlefield.

"The coalition takes this threat seriously," said the official, who insisted on anonymity in discussing the military's response to the new threat.

As recently as a decade ago, drones were the province of a few advanced industrialized countries, especially the United States, the pioneer and lead practitioner in the use of unmanned aerial vehicles to target and kill suspected terrorists overseas. But today, dozens of countries, including Israel, China and Iran, manufacture and operate military-grade UAVs.

At the same time, a rapidly growing commercial drone industry has made the technology available to private consumers almost anywhere in the world. Online shoppers can pick from hundreds of models, from sparrow-sized "nano" drones that can be controlled from a smartphone to larger aircraft that cost thousands of dollars and can carry small payloads.

The sudden availability of cheap, remote-controlled flying machines did not escape the notice of terrorists groups. The Islamic State is only the latest in a long line of militant organizations that have acquired drones and attempted to modify them for their own purposes. The Iranian-backed group Hezbollah has repeatedly used drones to probe Israel's air defenses, and the group released video last summer that appeared to show a drone dropping Chinese-made bomblets on Syrian rebels.

Al-Qaida operatives in Pakistan commissioned an avionics engineer to build small attack drones and conducted at least one successful test flight before the program was discovered by police in 2013.

There have also been plots involving drones by lone-wolf actors in the United States. In 2011, a physics graduate and model hobbyist from Massachusetts was accused of planning to launch small drones with bombs against the Pentagon and the Capitol, according to an FBI affidavit.

The Islamic State's efforts so far have been comparatively crude. Beginning in August 2014, the terrorist group began using drones to gather battlefield intelligence and to document the effects of suicide bombings, often broadcasting the videos online to bolster morale, according to the report by MEMRI. Occasionally the group would strap an explosive onto a small drone and try to land it near a military outpost, as happened in October when a booby-trapped toy aircraft exploded as Kurdish fighters were examining it near the northern city of Irbil.

Terrorist leaders last year put out appeals for scientists and engineers to travel to Iraq and Syria to work on weapons programs, including drones. In March, a group of pro-Islamic State technicians used the social-media platform Telegram to discuss how common engine parts might be adapted for use in missiles or in military-style attack drones, according to transcript of the discussion provided by MEMRI.

"What does success look like?" asked one of the participants, using a nickname but describing himself as an American with a microelectronics background. "Are we talking about an actual guided missile or a drone which can drop payload?"

At least a few technical experts appear to have responded to the call. When government troops recaptured the Iraqi provincial capital of Ramadi last year, they discovered a small workshop where workers were attempting to manufacture drone parts from scratch. Photographs from inside the facility show homemade wings and fuselage parts as well as electronics, camera controllers and gyro sensors used to control flight, according to an analysis by Conflict Armament Research, a London-based nonprofit that investigates weapons trafficking.

Similar factories built to modify commercial UAVs have been found in liberated parts of Mosul in the past few weeks, all pointing to an "increasing use by ISIS of weaponized drones," said James Bevan, Conflict Armament Research's executive director, using an acronym for the Islamic State.

Bevan's analysts found that the group initially favored small helicopter-like drones with four rotors and sufficient heft to carry a small bomb - usually a mortar shell or similar device with stabilizing fins and a point-detonating fuse built to explode on impact. But some of the more recent attacks involved fixed-wing drones of uncertain origin, U.S. officials said.

When Iraqi troops captured drone facilities in Mosul earlier this year, they discovered scores of documents detailing an elaborate procurement system for purchasing the aircraft and parts, as well as extensive procedures for altering and testing the equipment. The records "speak to the group's efforts to secure, modify and enhance the range and performance of its drones," said a report by the Combating Terrorism Center at West Point, N.Y., which published some of the documents.

When the siege of Mosul began in the fall, Islamic State fighters stepped up their use of small surveillance drones to gather intelligence and showcase their efforts to defend the city, producing mini-documentaries with aerial footage of successful suicide attacks on Iraqi troops.

The shift to weaponized drone attacks began late last year and was ramping up dramatically at the time of the group's formal announcement of the program Jan. 24.

"The army of the Islamic State has revealed its use of the unmanned aircraft weapon for the first time," the group's al-Naba newsletter said. It described an "aerial bombardment" of Iraqi forces around Mosul and said "most of the hits were precise, and inflicted losses in the ranks of the apostates."

Since then, the group's social-media pages have carried dozens of videos showing strikes using small bombs and rockets. Not all the bombs find their targets, but the drone attacks have become a daily threat for residents in some parts of liberated eastern Mosul, Iraqi news accounts show.

Iraqi troops also have been forced to scan the skies for tiny aircraft and to take cover when they appear. Videos released by the Islamic State show multiple instances in which bombs were dropped close enough to Iraqi troop positions to cause injuries. Some of the footage appears to show wounded figures on the ground following the attacks, although there has been no official confirmation from Iraq of the terrorists' claim of dozens killed and wounded.

Regardless of the actual numbers, the campaign appears to have raised the spirits of some of the group's supporters. The Jan. 24 announcement triggered euphoric discussions on social-media platforms used by Islamic militant groups, as well as predictions that armed drones would soon be deployed elsewhere. One February 3 post on the Telegram messaging site called the early attacks "a drop in the sea."

"The coming days will reveal a lot more, Allah permitting," the post said, according to a translation provided by the SITE Intelligence Group, a private company that monitors jihadist websites. "After the planes, there are still a lot more surprises." Previously:
• Islamic State readies for fall of 'caliphate'