Secrets of people who never get colds 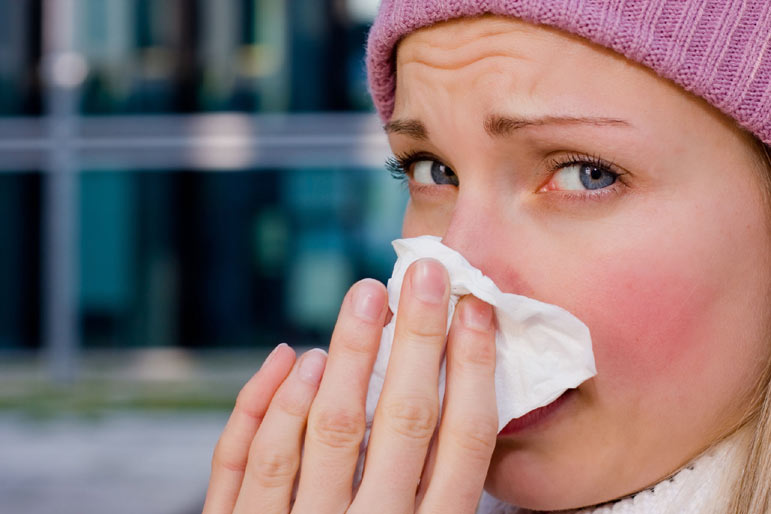 The average American adult will sneeze and sniffle through two head colds this year; the average child, up to a dozen. Then there is the bewildering minority who seem to never get sick, the enviable few who breathe through both nostrils all winter.

They are, admittedly, rare. Americans miss 40 million days of work - and make 100 million doctor visits - because of colds each year, according to Jennifer Ackerman, author of the book "Ah-choo! The Uncommon Life of Your Common Cold."

Over a lifetime, Ackerman says, the average person will suffer about 200 colds - adding up to about five miserable years of nasal congestion, scratchy throats and coughing. (To see how bad colds and flu are in your area, check out tracking maps at online weather services or this one at WebMD.)

Before the snuffling commences - or even if it already has - consider the advice of people who claim to never get colds, or at least say they suffer them rarely. They include a farmer in North Dakota who believes in the protective properties of garlic and onions; a Manhattan beauty and fashion guru who is enthusiastic about salt treatments and a nutrition coach in New Hampshire who credits eliminating dairy from her diet with more than a decade of cold-free living.

Their claims have not been evaluated by the Food and Drug Administration, nor has the advice of others here, but at the peak of the cold season, they're worth a look before the assorted noses in your family start dripping.

Katy Kassian lives on a 600-acre farm in North Dakoka, where she and her husband tend cattle and crops and she produces farm-related handbags and hats. To stay healthy, Kassian follows the advice of her grandmothers, one French and one Italian, both of whom said "you'll never be sick a day in your life if you eat garlic regularly."

Kassian grew up eating lots of garlic and onions, and raised her three sons to do the same, believing that they have properties that enhance health. She also touts apple-cider vinegar, a favorite among natural-food enthusiasts for preventative nutrition. (It also can't hurt that she and her husband produce organically 80 percent of what they consume, from meat to produce.)

In Portsmouth, New Hampshire, Jessica Kliskey says she hasn't had a cold in 15 years. She says it's because she gave up most dairy products after her son was diagnosed with an allergy as a baby. On the rare occasion she needs milk for a recipe or craves a cup of hot chocolate, she uses organic raw milk. A certified holistic nutrition coach, Kliskey blames dairy on a host of other ailments. "It can cause inflammation, eczema, asthma, joint pain; the list goes on and on," she said.

In New York City, Brittney Levine says she used to get a sinus infection twice a year until she started dry salt therapy - the practice of sitting in a room heavily infused with salt, as practiced in some European countries and in a few major U.S. cities. "I can't think of the last time I had a cold. It's changed my life," said Levine, who travels a lot as a style and trend television correspondent. "I always try to hit the salt room before or after I get off a plane, which I believe helps me as well," she said.

Also in New York, competitive power lifter Robert Herbst says even though he often works out in public places, he is cold-proof because of regular exercise (mostly outside) and a regiment of vitamins that he has adapted for his body's needs over time. (A multivitamin, a multi-mineral formulation, B complex, vitamin A and vitamin C in time-release form. Although some people say that vitamins do little more than make expensive urine, Herbst says by taking them regularly, he is ready for the occasional need for extra. "On the day that I need it, it's in there," he said.

On the other side of the country, Dr. Murray Grossan, an ear, nose and throat specialist in Los Angeles, says he rarely gets sick even though he is exposed to people with acute colds almost every day. He credits a diet rich in yogurt, which reduces stress hormones like cortisol. He also credits Netflix. "If I suspect a possible onset, watching a funny movie with green tea helps," Grossan said. Green tea contains L-threonine, an amino acid said to boost the immune system, and laughter helps immunity, as well.

In her book about colds, Ackerman says, the closed, crowded spaces of modern society have created a "golden age" for the 250-plus varieties of colds to spread, and that is particularly true in places teeming with children. She quotes Harley Rotbart, M.D., vice chairman of pediatrics at the University of Colorado, Denver, School of Medicine: "Not since the trenches of World War I have germs been efficiently shared as in today's child care centers."

Dr. Daniel J. Brotman, professor of medicine at Johns Hopkins University School of Medicine in Baltimore, discovered that was true for him when he rotated in pediatrics as a medical student, and also at home, when his children were young, and he was frequently "keenly aware of being sick with multiple colds." Now, he says, he gets one every three or four years, which he attributes to not being around children as much, but also, because of the better odds that come with age.

That's because, once you've had one strain of a cold, your body develops an immunity - or at least a partial immunity - to it. But people keep getting colds and researchers haven't been able to develop vaccines to protect against them because there are so many kinds: 250 or so, spread among at least five families of viruses.

So most times you get a cold, you're literally getting a new cold - or if you have a mild one, it may be a strain you've already had that has mutated, or that you've developed partial immunity to, Brotman said. In fact, a person can contract a cold and not even know it; a hard-working immune system can recognize it and knock it out before symptoms take hold.

So people who seem to never get colds may have already been exposed to a lot earlier in their life, or don't get out a lot. "Prevention is key," Brotman said. "If you lived alone without any exposure to people or animals that have viruses, you'd never get a cold, but given that most of us are not hermits, it is good to wash your hands and avoid being sneezed on."

And certain habits and conditions make it more likely you'll catch one when exposed: in particular, if you smoke, or are sleep deprived, he said. "Biological plausibility and anecdotal evidence say that if you tire your body out, you're more likely to get an infection, not just with colds, but in general."

Oils that may help

Even working with children, there are strategies that work, says Amanda Goodyear Zulkowski of Wilmington, Delaware. Zulkowski works at a preschool but still rarely gets sick, which she attributes to her preventative habits. "The first thing I drink every morning is warm water with lemon and honey," she said. "I'm also a coconut-oil nut. I blend a tablespoon in my coffee every morning and use a Q-tip to put a light layer around my nose before I leave the house. If I start to feel a little congested, I will oil-pull," she said. (Oil-pulling is swishing coconut or olive oil in the mouth, which is said to draw out toxins.)

"I also use a humidifier in the winter, which I think helps," Zulkowski said.

Another natural remedy is said to be thieves' oil, which Rebecca Sweigard Haake, who also works with preschoolers, uses. Any combination of natural oils - such as olive, clove or eucalyptus, the concoction is said to have been used by thieves trying to avoid catching the bubonic plague in the 14th century. Haake rubs it on her neck and chest before bedtime. "It boosts the immune system and has kept colds at bay for as long as I have been using the protocol."

About once a year, though, she says, she'll feel a tickle in her throat, and "fight back with a vengeance" with mega-doses of vitamins A and D, zinc, and an immunity boosting product called Emergen-C.

If all else fails, take to bed with a box of tissue and a bowl of chicken soup, which has been shown to make cold sufferers feel better. A cold can last from a few days to up to two weeks, but most people are better in a week, Ackerman writes.