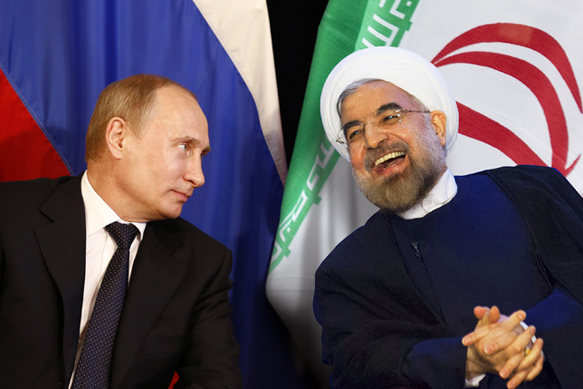 With little international notice, Russia is using the Syrian civil war as a live-fire boot camp to train Iranian troops as the region's dominant military force. And the U.S. seems unable - or still unwilling - to respond effectively.

Iran has already dispatched up to 100,000 troops or proxies into next-door Iraq, allegedly to help its Shiite neighbor combat the Islamic State. But it is also arming and backing Houthi rebels in Yemen and Hezbollah in Syria, among others.

President Donald Trump says Iran is "misbehaving," but so far he has merely warned the regime against its activities with symbolic sanctions. Iran's response was to launch another test missile capable of reaching Israel.

Trump fiercely criticized President Barack Obama's nuclear deal with the ayatollahs, which the Democrat portrayed as a pacifying force. Of course, it actually helped the regime by relieving crippling economic sanctions and returning billions in frozen funds to Tehran.

This all presents a growing threat to American allies and influence as Trump builds and gets his new administration up to speed in both foreign and domestic policies. But the president already faces a de facto axis of opposition power with Russia and Iran controlling Syria as a de facto client state.

Trump's continuation of Obama's drift there needs to change. The president meets this week with Israeli Prime Minister Benjamin Netanyahu and already conferred with Jordan's King Abdullah on Feb. 2, in addition to numerous telephone consultations with other leaders.

As a leading financier of terrorism, Iran's expansionist ambitions have long been evident. Now besides Iraq, Iran has troops in Syria to sustain the Assad regime in that bloody civil war. That force is certainly significant given known casualty figures of more than 700 dead.

Russia isn't saying how many troops it's stationed in Syria. Like Iran, Russia's military has cycled forces in and out of that war-torn country to spread training and experience to as many troops as possible.

In a rare glimpse of the actual size of Russian forces in Syria, diplomats have spotted reports of 4,571 Russian soldiers voting absentee there recently. Last year, Russia announced a purchase order for more than 10,000 Syrian campaign participation medals.

However many have passed through, their assignments are clear: to help defeat factions opposing Assad and, simultaneously, turn their own troops into experienced combat veterans. And Russian bombing has somehow managed to also hit anti-Assad rebels coached by U.S. Special Forces.

Foreign news coverage is expensive, so Americans have been fed more on Trump tweets and White House turmoil. In a disturbing recent research analysis, the nonpartisan Institute for the Study of War reported:

"Iranian military cooperation with Russia in Syria is dramatically increasing Tehran's ability to plan and conduct complex conventional operations. Iranians are learning by seeing and by doing, and are consciously trying to capture lessons-learned in Syria for use throughout their military and para-military forces. . . .

"(Russia) is introducing Iran and its proxies to signature Russian campaign-design concepts such as cauldron battles, multiple simultaneous and successive operations, and frontal aviation in Syria. . . . It can help Iran become a formidable conventional military power in the Middle East in relatively short order, permanently changing the balance of power and the security environment in the region."

In another ominous report this month the institute said:

"Iran is transforming its military to be able to conduct quasi-conventional warfare hundreds of miles from its borders. This capability, which very few states in the world have, will fundamentally alter the strategic calculus and balance of power within the Middle East."

"It is not a transitory phenomenon," the study warned. Iran's military has dispatched to Syria troops from a variety of units including the Islamic Revolutionary Guards Corps to "expose a significant portion of its force to this kind of operation and warfare."

It added: "Iran intends to continue along the path of developing a conventional force-projection capability."

Russia's Vladimir Putin expressed optimism about a summit with Trump, likely this year, to restore good relations on a broad front after an initially optimistic then chilly Obama era.

On Putin, Trump said recently: "I don't know the gentleman. I hope we have a fantastic relationship. That's possible. And it's also possible that we won't."

Studying the unfolding reality of Putin duplicity on the ground, don't bet on optimism.