Will President Trump stand behind his red line with Iran? 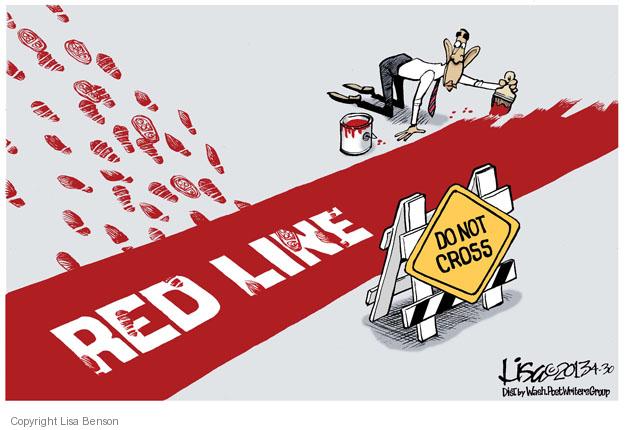 Will Trump pull an Obama?

As promised, President Donald Trump made his first Supreme Court nomination the other day, a historic choice that consumed much of the discussion oxygen for the entire week.

But 14 hours later his White House issued an unexpected statement that could have fateful consequences too. The statement, followed by others and new financial sanctions on Iran, drew a diplomatic red line for that troublesome country.

"As of today, we are officially putting Iran on notice."

Asked later whether military action was a possibility, Trump said what all presidents claim: Everything is on the table.

The situation is particularly precarious because after President Barack Obama's numerous empty threats, the United States has scant credibility to enforce them, especially in the Middle East. It will take some time - and perhaps the use of military force - for a Trump administration to be taken more seriously.

Predictably, Iran dismissed the U.S. bluster and launched another rocket as Trump's domestic opponents protested his temporary immigration ban and its rollout.

"The United States needs to be less predictable," Trump said. You may have noticed in the new president's first two weeks there was a good deal of unpredictability. Not by accident.

"Iran," Vice President Mike Pence warned Sunday, "would do well not to test the resolve of this new president."

Obama's diplomacy was indeed predictable in one very serious sense: No matter what he sought, implied or threatened, there would be no serious consequences beyond words and ineffective sanctions.

Often Obama offered concessions even before they were sought. He canceled missile defense systems in Eastern Europe to coax Russian cooperation reining in Iranian ambitions. Russia said thanks, then sold advanced military hardware to the mullahs.

Obama vowed "swift justice" on Benghazi's murderers; nothing happened. His economic sanctions on Russia for annexing Crimea were so serious that President Vladimir Putin ignored them, armed Iran, fomented rebellion within Ukraine and moved militarily into Syria.

Obama's worst display of impotence came from his infamous 2012 threat to Syria's Bashar Assad that using chemical weapons in that civil war would cross a red line in the Democrat's mind.

"We have been very clear to the Assad regime, but also to other players on the ground," Obama said during an impromptu White House briefing sans teleprompter, "that a red line for us is we start seeing a whole bunch of chemical weapons moving around or being utilized. That would change my calculus. That would change my equation."

And with his national security and State department secretaries in place, Trump now has his team assembled.

A problem with ambiguity, of course, is that a paranoid opponent might overreact. More importantly, Trump must be prepared to impose consequences on his "notice." And then be prepared for the enemy's reaction to those consequences.

Westerners have an expression for someone who talks a lot and does little. They say he's all hat and no cattle. Trump has that familiar red baseball cap. To avoid earning the same international reputation as Obama, we'll soon see whether the New Yorker has any cattle in his diplomatic herd.

A year later Assad had again used chemicals on civilians. Facing domestic criticism, Obama blustered, did nothing, blamed Congress for inaction and Putin stepped in to broker a faux weapons disposal.

In real estate negotiations and his recent campaign Trump has seen unpredictability as a positive bargaining tool. Sending Flynn out to read carefully from a prepared text - and take no complicating questions - was a clear sign that Trump will employ such strategic ambiguity and threats in diplomacy. Let Iran imagine how bad the consequences might be, starting with renewed sanctions.