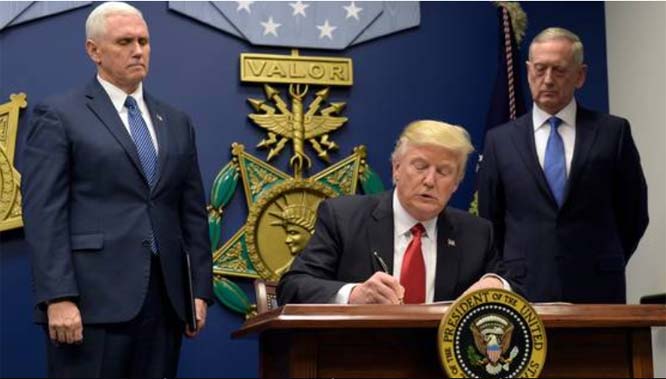 The Washington media, by and large, have been infected by the same centralized arrogance and self-importance as the politicians there. The pols of both parties got their rude awakening late last Nov. 8, when the unthinkable happened, that brash billionaire boob from New York upset their expectations.

Democrats have floundered for explanations, all involving some evil outside force like Russia or James Comey. Republicans, who must face voters again in just 21 months, have worked on a new relationship with the big guy ever since with erratic success.

Now it's the D.C. media's turn to adjust. Accustomed to cozy familiarity and ideological compatibility with Barack Obama, they're shocked by Donald Trump - and not pleasantly. You'll see this play out for the foreseeable future. Consumers of politics news should learn to filter out such instinctive rancor.

Here comes an administration that follows few norms as these creatures of habit and privilege know them. It plays them differently, calls them dishonest and liars. Presidential aides call them the opposition. Shock!

Now why in the world would that be? The Center for Public Integrity reported last fall that 96 percent of journalists' political donations went to Hillary Clinton. Republicans have long known the media they encounter daily is almost universally opposed to them.

What wasn't known before the autumn of WikiLeaks was how actively individual reporters at several news organizations collude with Democrats: offering strategy suggestions, running their stories by campaign aides for approval pre-publication. One TV commentator even passed advance debate questions to Clinton's cadre.

Some Republicans appear to get along with D.C. media because of their willingness to provide statements, often at variance with party orthodoxy. This serves both sides. The reporter gets an easy reaction quote, often contentious. The pol gets national exposure. During this past cycle Sen. John McCain, R-Ariz., appeared on Sunday talk shows so much he could have been host.

When, by the way, was the last time you saw anyone from flyover country as a Sunday guest or panelist? Exactly. That's how all those pundits missed the biggest political upset in decades and failed their viewers.

Conservatives, especially disdained by media, have in the past put up token resistance. This is our lot, they figure. Don't fight unnecessarily with those who buy newsprint by the ton; it's bad enough already.

Suddenly a new president arrives who plays the media like a Stradivarius. He needs them politically, of course, to show how busily he's delivering on campaign vows. But this man also seems to need them to validate his success, even existence.

All presidents seek to manipulate media for their own ends. They feign friendliness, cater to deadlines, feed their entitlement, attend their dinners so journalists look like players in a status-driven town and appear to spoil them with favorable leaks and access. A pool report on Trump's first Air Force One trip noted with apparent disappointment that the free M&M's do not yet carry POTUS' name.

Not only does Trump go around media via Twitter, this guy also pushes back. The media expect criticism but are unaccustomed to call-outs. The news media love to talk about themselves, especially perceived threats. Watch reporters steer coverage to easy trivial issues. Please!

And he's challenging media privilege. By custom, The Associated Press gets the first briefing question. Spicer first called on the New York Post, then the Christian Broadcasting Network and Univision. But . . . but . . . but you can't do that. He'll soon take out-of-town questions via Skype.

"There are voices and issues," Spicer says, "the mainstream media sometimes doesn't capture." Do ya think?

Expect tumult and grumbling in your White House news coverage for some time. And perhaps little progress. "Why has the media establishment become so unpopular?" James Fallows asks. "Perhaps the public has good reason to think that the media's self-aggrandizement gets in the way of solving the country's real problems."

Fallows wrote that in The Atlantic 21 years ago.