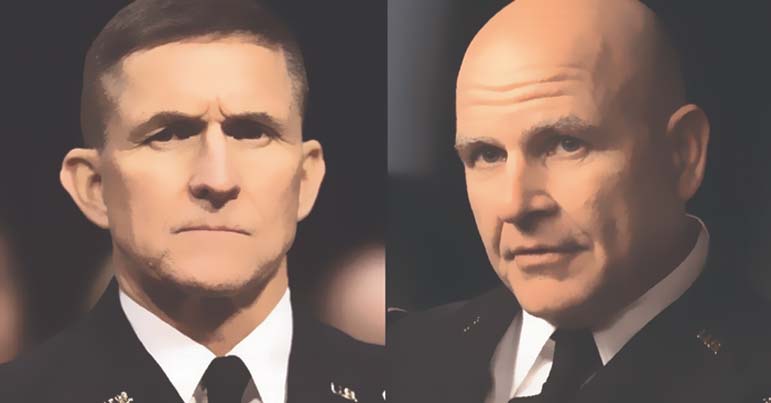 In some ways, President Donald Trump's new national security adviser, H.R. McMaster, is a lot like the man he is replacing, Michael Flynn. Both rose to the rank of three-star generals in the Army. Their worldviews were formed during the war in Iraq.

At key points in their careers, the two generals were withering critics of the groupthink endemic to the strategic class. For Flynn this was a devastating paper he published in 2010 critiquing intelligence collection in Afghanistan. For McMaster this was his 1997 book on the failures of the military leadership to speak truth to power during the Vietnam War.

But McMaster and Flynn are very different in their assessment of America's relationship with Islam and how this influences the long war on terror. In recent years, Flynn has focused on defeating the ideology of radical Islam. McMaster, on the other hand, has focused on getting radical Muslims to turn on al-Qaida and other terrorists.

Let's start with Flynn. Like the president he served, the retired general believes America should wage a political war against radical Islam. In his more heated moments, Flynn spoke about Islam itself as a political ideology, and one that is at war with Western values. Radical Islam's threat to the West was a key theme in his 2016 book "Field of Fight," which he co-wrote with historian Michael Ledeen. In interviews with me over the years, Flynn has taken a more nuanced view on this than some others in Trump's orbit. Nonetheless, his approach, like Trump's, broke with George W. Bush and Barack Obama in emphasizing the differences between political Islam and Western values.

McMaster has taken a different approach. He helped rewrite the Army's counterinsurgency doctrine during the Iraq war, to apply the lessons of this kind of asymmetric warfare to the Muslim world. This meant in practice that he learned how to make allies out of Muslim fighters who had killed Americans, to turn the local population against al Qaeda. In McMaster's war, ideological purity was a hindrance to an effective campaign for the hearts and minds of pious Muslims.

"H.R., like all of us, has shaken hands with Muslims who fought against Americans and killed Americans and switched sides to fight with us against al-Qaida," John Nagl, a retired lieutenant colonel best known for his books on counterinsurgency, told me. "He understands that the world is not one dimensional, that the Muslim world is not one dimensional. Even people who are our enemies today may decide to fight on our side tomorrow."

Nagl collaborated with McMaster when he co-wrote the Army's and Marine Corps's Counter-Insurgency Field Manual. At the time in 2005 and 2006, McMaster was commanding the 3rd Armored Cavalry Regiment in Tal Afar, Iraq, where he worked closely with the local mayor to build a Sunni Arab police force at a time when most of Iraq's Sunni Arabs were either supportive of or neutral toward the jihadi insurgency that had lit Iraq aflame. Nagl told me that he would be on the phone to discuss chapters of the new field manual and McMaster would have to cut the conversation short: "Car bomb, got to go."

McMaster's success in Tal Afar became a model for the "surge," the Iraq War plan led by Gen. David Petraeus in 2007 that paid off and trained Sunni Arab fighters to join the U.S. side against al-Qaida in the western part of Iraq. A big part of McMaster's strategy was to instill a sense of cultural sensitivity among his troops. As George Packer reported in 2006, McMaster forbid use of profanity in front of Iraqis, as well as banning the derogatory term "hajjis," a reference to the Islamic pilgrimage to Mecca.

Sterling Jensen, who served as a translator in Iraq's Anbar province in the 2000s and worked closely with U.S. officers in forging the alliance with local sheiks against al-Qaida, told me that McMaster's appointment sent a reassuring message to Muslims. "For over five years I was in regular contact with McMaster through Najim al-Jubouri, the current commander of the Ninivah Operations Command in charge of the operation against Daesh," Jensen said. "There isn't anyone who has been more supportive of General Najim and U.S. friends in Iraq than McMaster."

Najim and McMaster first met in 2005 in Tal Afar. Najim, who at one point considered joining the insurgency against the U.S., became the mayor of the city and worked closely with McMaster to build up a police force that earned the trust of the local population. The two men have stayed in touch since. When I interviewed Najim in 2010, he credited McMaster with being one of the officers who saved Iraq from the abyss.

"Iraqis and Muslims won't see him as someone who hates Islam, even if the Trump administration is perceived that way. I have never heard him say anything against Islam," Jensen said. "Being respectful is one of his defining characteristics."

McMaster's relationships in Iraq could be an asset if Trump seeks to reassure the Middle East that America is not in a war against Islam. So far, the messages from Trump have been mixed. He backed away from a formal ban on Muslim migration into the U.S. But the rollout of the travel ban targeting seven majority-Muslim nations was so haphazard that many of his critics at home and abroad have described it as a de facto Muslim ban. If Trump seeks to designate the Muslim Brotherhood as a terrorist organization, then this impression will be further confirmed.

Privately, some of McMaster's allies worry that he will not have the power and influence of other political aides to Trump, like chief strategist Steve Bannon. Bannon has called Islam a "religion of submission." He has a seat on the National Security Council; McMaster will now lead it.

This presents a new kind of challenge for McMaster. An Army general who made his name persuading Muslims to join the war against al-Qaida will now have to persuade Trump not to alienate them.