Separating fact from innuendo in the Flynn fiasco 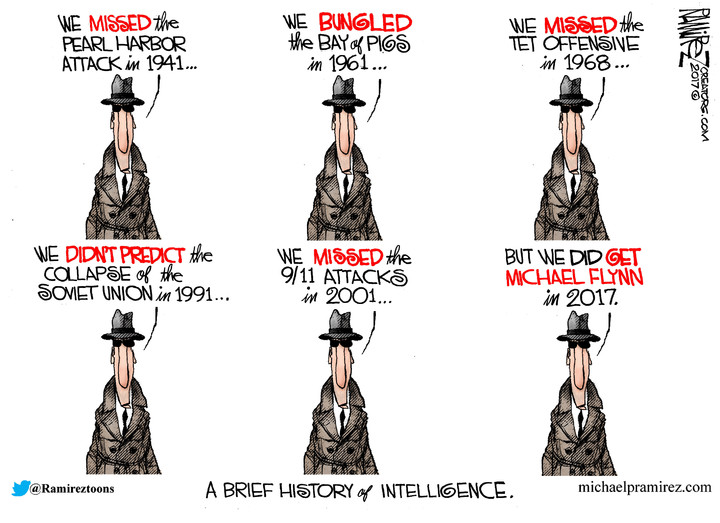 The issue with the ouster of Michael Flynn as national security adviser is not the mishandling of classified information, despite some of President Donald Trump's tweets about it. It's about Flynn's detractors selectively disclosing to the public the communications of U.S. officials, and how this represents a chilling abuse of power.

The backdrop to this is all the open questions about how Russia influenced the last election, and whether Trump's associates colluded in this operation. That is a necessary investigation. If Trump and his advisers had anything to do with that, it's a high crime.

The good news is that the FBI, in conjunction with the intelligence community, is now probing the matter. So is the Senate Select Committee on Intelligence. There is also renewed momentum for a more formal independent commission to examine all of this as well. That's important.

But it's worth asking what any of this has to do with Flynn. He failed to give all the details of some December phone calls with the Russian ambassador but at no point has been accused of working with Russia in its campaign to hack leading Democrats, distribute their e-mails on the internet or sabotage the election in less grotesque ways. While others in Trump's orbit, including his former campaign manager Paul Manafort, are allegedly being investigated for this), The Washington Post has reported that Flynn is not now a target of an FBI probe.

So what law did Flynn violate? According to the New York Times, he may have violated the Logan Act, an antiquated statute that prohibits private citizens from negotiating with foreign adversaries. The Times reported that Obama administration advisers believed Flynn may have negotiated a deal with Russia just after Obama had imposed new sanctions and expelled Russian spies as punishment for Moscow's interference in the election. On Thursday, The Post reported that Flynn may have misled FBI agents investigating the phone calls.

There are a few important points here. To start, there is no indication that Flynn made any quid pro quo with the Russians. The Times reports this, and I have confirmed it with my own sources. Second, the Logan Act, which dates to 1799, is likely unconstitutional. The Justice Department does not prosecute Americans violating it. And in this case, the private citizen was about to become the national security adviser. If it's illegal for incoming U.S. officials to discuss policy with foreign adversaries, then the hard work of preparing the transition of a foreign policy agenda for an incoming administration will be outlawed. The FBI investigation is more serious, but so is disclosing the bureau's ongoing investigations to the press.

It's also been reported that Flynn had contacts with Russians during the election. That's a bit more troubling but means very little in and of itself. It's also not unprecedented. In 2008, an Obama foreign policy adviser, Daniel Kurtzer, traveled to Damascus to offer the government there his views on the Syria-Israeli peace talks.

Many Democrats, including former Secretary of State John Kerry, met with Iran's ambassador to the United Nations during George W. Bush's final years as president at a moment when our military leaders accused Iran of killing U.S. soldiers in Iraq by providing militias with improvised explosive devices. If Bush's FBI had launched Logan Act investigations in that period, would Democrats have cheered on the leaks of the investigations?

Flynn may have concealed his contacts with Russian nationals in the last year. He did attend a 2015 conference in Moscow put on by the Russian propaganda network RT, for which he was paid by his speaker's bureau. Some reporters have raised the prospect that Flynn's receipt of money that initially came from Russia violated the Pentagon's guidelines for retired members of the military.

The weakest reed in all of this is the charge that Flynn would be susceptible to Russian blackmail because he did not tell Vice President Mike Pence the full story about his phone call. According to The Post, then-acting Attorney General Sally Yates felt compelled to take this information to the White House at the end of January because she was so concerned that Flynn was compromised.

This sounds like concern-trolling to me. If Flynn forgot the brief discussion of sanctions in his phone call with the Russian ambassador, as he claimed in his resignation letter, it's far-fetched to think the Russians could coerce him to betray his country to not expose the "lie." This is why it's so important to release the transcripts of these phone calls to the public, as former U.S. attorney Andy McCarthy argues in his National Review column.

Nonetheless, the damage is now done. Republicans are saying that Flynn should be asked to testify before Congress. His security clearance has been suspended. He has retained a lawyer. Flynn will likely spend months and possibly years defending himself because he briefly talked to the Russian ambassador about sanctions a few weeks before he was about to become Trump's national security adviser.

If that's all there is to this, then the Democrats and the FBI should be ashamed of themselves. There is a far more important matter to investigate: the Russian influence operation against the U.S. election and whether Trump and any associates aided and abetted it. So far, no one has alleged that Flynn had anything to do with that. This hasn't stopped his accusers though from trying and convicting him in the press. Flynn's enemies waged this campaign by disclosing communications that we should be able to trust the government to monitor with proper discretion. Thanks to these leaks, that trust has eroded.