The political assassination of Michael Flynn 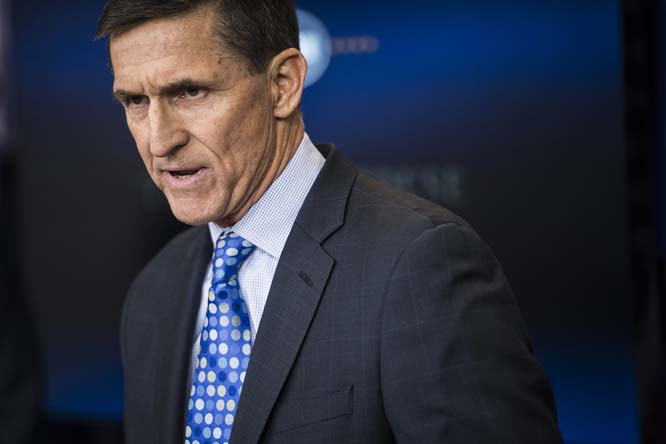 If we are to believe the Trump White House, National Security Adviser Michael Flynn just resigned because he lied about his conversations with Russia's ambassador to the vice president. As White House senior counselor Kellyanne Conway told NBC's "Today Show" on Tuesday: "Misleading the vice president really was the key here."

That sounds about as credible as when the president told CIA employees that the media had invented the story about his enmity toward the spy agency, not even two weeks after he had taken to Twitter to compare the CIA to Nazis. It's about as credible as President Donald Trump's insistence that it didn't rain during his inauguration. Or that millions of people had voted illegally in the election he just won.

The point here is that for a White House that has such a casual and opportunistic relationship with the truth, it's strange that Flynn's "lie" to Pence would get him fired. It doesn't add up.

It's not even clear that Flynn lied. He says in his resignation letter that he did not deliberately leave out elements of his conversations with Ambassador Sergey Kislyak when he recounted them to Vice President Mike Pence. The New York Times and Washington Post reported that the transcript of the phone call reviewed over the weekend by the White House could be read different ways. One White House official with knowledge of the conversations told me that the Russian ambassador raised the sanctions to Flynn and that Flynn responded that the Trump team would be taking office in a few weeks and would review Russia policy and sanctions. That's neither illegal nor improper.

What's more, the Washington Post reported Monday night that last month Sally Yates, then the acting attorney general, had informed the White House that Flynn discussed sanctions with Kislyak and that he could be susceptible to blackmail because he misled Pence about it. If it was the lie to Pence that sunk Flynn, why was he not fired at the end of January?

A better explanation here is that Flynn was just thrown under the bus. His tenure as national security adviser, the briefest in U.S. history, was rocky from the start. When Flynn was attacked in the media for his ties to Russia, he was not allowed by the White House to defend himself. Over the weekend, he was instructed not to speak to the press when he was in the fight for his political life. His staff was not even allowed to review the transcripts of his call to the Russian ambassador.

There is another component to this story as well -- as Trump himself just tweeted. It's very rare that reporters are ever told about government-monitored communications of U.S. citizens, let alone senior U.S. officials. The last story like this to hit Washington was in 2009 when Jeff Stein, then of CQ, reported on intercepted phone calls between a senior Aipac lobbyist and Jane Harman, who at the time was a Democratic member of Congress.

Normally intercepts of U.S. officials and citizens are some of the most tightly held government secrets. This is for good reason. Selectively disclosing details of private conversations monitored by the FBI or NSA gives the permanent state the power to destroy reputations from the cloak of anonymity. This is what police states do.

In the past it was considered scandalous for senior U.S. officials to even request the identities of U.S. officials incidentally monitored by the government (normally they are redacted from intelligence reports). John Bolton's nomination to be U.S. ambassador to the United Nations was derailed in 2006 after the NSA confirmed he had made 10 such requests when he was Undersecretary of State for Arms Control in George W. Bush's first term. The fact that the intercepts of Flynn's conversations with Kislyak appear to have been widely distributed inside the government is a red flag.

Rep. Devin Nunes, the Republican chairman of the House Permanent Select Committee on Intelligence, told me Monday that he saw the leaks about Flynn's conversations with Kislyak as part of a pattern. "There does appear to be a well orchestrated effort to attack Flynn and others in the administration," he said. "From the leaking of phone calls between the president and foreign leaders to what appears to be high-level FISA Court information, to the leaking of American citizens being denied security clearances, it looks like a pattern."

Nunes said he was going to bring this up with the FBI, and ask the agency to investigate the leak and find out whether Flynn himself is a target of a law enforcement investigation. The Washington Post reported last month that Flynn was not the target of an FBI probe.

The background here is important. Three people once affiliated with Trump's presidential campaign -- Carter Page, Paul Manafort and Roger Stone -- are being investigated by the FBI and the intelligence community for their contacts with the Russian government. This is part of a wider inquiry into Russia's role in hacking and distributing emails of leading Democrats before the election.

Flynn himself traveled in 2015 to Russia to attend a conference put on by the country's propaganda network, RT. He has acknowledged he was paid through his speaker's bureau for his appearance. That doesn't look good, but it's also not illegal in and of itself. All of this is to say there are many unanswered questions about Trump's and his administration's ties to Russia.

But that's all these allegations are at this point: unanswered questions. It's possible that Flynn has more ties to Russia that he had kept from the public and his colleagues. It's also possible that a group of national security bureaucrats and former Obama officials are selectively leaking highly sensitive law enforcement information to undermine the elected government.

Flynn was a fat target for the national security state. He has cultivated a reputation as a reformer and a fierce critic of the intelligence community leaders he once served with when he was the director the Defense Intelligence Agency under President Barack Obama. Flynn was working to reform the intelligence-industrial complex, something that threatened the bureaucratic prerogatives of his rivals.

He was also a fat target for Democrats. Remember Flynn's breakout national moment last summer was when he joined the crowd at the Republican National Convention from the dais calling for Hillary Clinton to be jailed.

In normal times, the idea that U.S. officials entrusted with our most sensitive secrets would selectively disclose them to undermine the White House would alarm those worried about creeping authoritarianism. Imagine if intercepts of a call between Obama's incoming national security adviser and Iran's foreign minister leaked to the press before the nuclear negotiations began? The howls of indignation would be deafening.

In the end, it was Trump's decision to cut Flynn loose. In doing this he caved in to his political and bureaucratic opposition. Nunes told me Monday night that this will not end well. "First it's Flynn, next it will be Kellyanne Conway, then it will be Steve Bannon, then it will be Reince Priebus," he said. Put another way, Flynn is only the appetizer. Trump is the entree.