The three-headed hydra of the Middle East 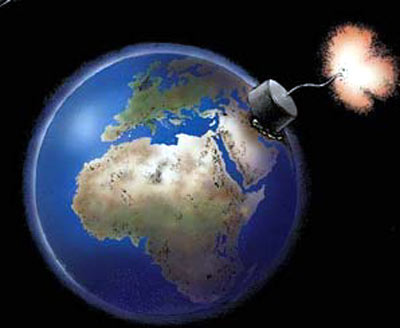 The abrupt Obama administration pre-election pullout from in 2011, along with the administration's failed reset with and the deal, created a three-headed hydra in the .

What makes the monster deadly is the interplay between the Iranian terrorist regime and its surrogates and the Assad regime; Russian President deployment of bombers into and after a 40-year Russian hiatus in the region; and the medieval beheaders of the .

is simultaneously at war against the Assad regime, and Iranian surrogates such , and Russian expeditionary forces. also seeks to energize terrorist attacks in and .

Stranger still, almost surely is receiving stealth support from Sunni nations in the , some of them ostensibly American allies.

This matrix gets even crazier.

The authors of reset policy during the Obama administration are now furious at President Trump for even talking about what they tried for years: reaching out to Putin. Yet in the , is doing us a favor by attacking , even as it does no favors in saving the genocidal Assad regime that has murdered tens of thousands of innocents -- along with lots of terrorists as well.

is the sworn enemy of , yet its foreign proxies attack our shared enemy, . The very troops who once blew up Americans in with shaped charges are for now de facto allies on the Syrian and Iraqi battlefields.

Given that there is now no political support for surging thousands more troops into to reverse the disastrous Obama administration pullout, there are three strategic choices in dealing with the hydra, all of them bad:

One, hold our nose, and for now ally with and to destroy first. Then deal with the other rivalries later on. (The model is the American-Soviet alliance against Hitler that quickly morphed after 1945 into the Cold War.)

Two, work with the least awful of the three, which is probably . (The model might be outreach to Mao's that left and at odds and confused over the role of .)

Three, simply keep out of the mess and let them all diminish each other, despite the collateral damage to the innocent. (The model is the savage - war of 1980-1988 that weakened enemies and the Iranian theocracy but resulted in some 800,000 deaths.)

In the short-term, option three is ostensibly the least costly -- at least to the But 2 million Syrian and Iraqi refugees have swarmed , coinciding with an uptick in radical Islamic terrorism. is becoming the new Balkans or -- and nonintervention would mean allowing the wasteland to spread, as hundreds of thousands more civilians die or flee westward.

Which of the other two options is the least objectionable?

After 2014, we quietly pursued option one by fighting in parallel fashion with , , and the Assad government against , the more dreadful enemy.

Apparently, the Obama rationale was that when was destroyed, the could then come to terms with an energized and empowered rather than with . The jury is out on that strategy.

The second option so far seems to be President Trump's preference: a new dĂ©tente with Putin in hopes that he will back off even a bit from his support of and as we jointly fight .

The flipping- approach may seem unlikely: It assumes nuclear is far less of a threat than soon-to-be-nuclear . Would Putin really be willing to write off a half-century of Russian support for ?

Or can Putin see that the has mutual interests with in opposing all Islamic extremism -- both and Putin's Iranian clients?

Would the mercurial Putin work with moderate Sunni regimes, and the to provide regional stability?

persuade Putin that having as yet another nuclear power near the borders of the old (in addition to , , , and forces) is not in interest?

Would overlooking Putin's autocracy be any worse that the Obama administration's negotiations with a murderous , the world's chief sponsor of terrorism? What would be Putin's steep price to abandon Assad, to ensure that stays non-nuclear, and to finish the destruction of ?

These are bad choices.

Trump, a political outsider, did not create the monster. Rather, he inherited from past leaders the three-headed hydra of the .