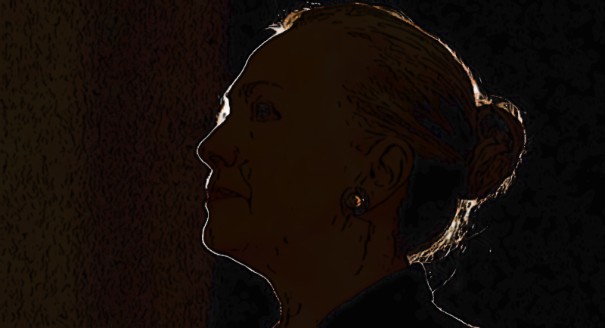 "After Bush got reelected in 2004, the first thing he said was, let's go privatize Social Security. . . . And you know what, their whole plan was, their plan was to give the Social Security trust fund to Wall Street. Imagine that."

George W. Bush's plan for private Social Security accounts - which died a quick death after even congressional Republicans balked at the idea - remains a favorite bogeyman of Democrats. Even more than a decade after the plan's demise, the claim that the GOP will "privatize" Social Security still pops up in attack ads.

We have explained before that "privatization" is one of those pejorative political labels used by opponents of the Bush plan, akin to the bogus Republican claim that the Affordable Care Act is a "government takeover" of health care. Just as the health-care law preserves the private health-care system, private accounts in Social Security would have been established as part of the current system.

But there's something else about Clinton's claim that was wildly off. Let's take a look.

Social Security has two trust funds -- one for retirement benefits and one for disability benefits -- that are currently invested in Treasury securities, one of the safest investments possible.

In the late 1990s, as the federal government started running unexpected budget surpluses, Democrats and Republicans argued about what to do with the projected trillions of dollars in extra money. Republicans began pushing for a big tax cut, while then-President Bill Clinton countered with "Save Social Security First."

The old-age retirement program was expected to face financial stress with the pending retirement of the baby boom generation. The leading edge of that generation would reach retirement age around 2008, and today some 10,000 Americans retire each day.

In his 1999 State of the Union address, Clinton proposed transferring $2.7 trillion of the budget surpluses to the Social Security trust funds - and investing 20 percent of the funds in the stock market, most likely in index funds. Clinton's goal was to have about 14.5 percent of all trust fund assets in stocks. By 2014, it was estimated, the government would own nearly $1 trillion of the shares of U.S. corporations.

The hope was that the higher returns from stock investments would help extend the solvency of the program as baby boomers moved into retirement.

As a technical matter, Clinton proposed to invest general revenues in the stock market in order to bolster Social Security; he did not propose diverting payroll-tax revenue destined for the trust funds.

Tapping general revenues, however, was also controversial because it would break the link between Social Security and workers' paychecks. In any case, one could certainly say that the first president who wanted to "give the Social Security trust fund to Wall Street" was Bill Clinton.

Clinton's proposal was met with horror by Republicans, who feared government manipulation of the securities markets. (Then-Federal Reserve Chairman Alan Greenspan was an especially strong foe.) Republicans countered with an alternative proposal - allowing individuals to direct a portion (about 15 percent) of their Social Security payroll taxes to individual retirement accounts. These were called "personal accounts," in that Americans would have a choice of investment options modeled on the retirement program for federal workers.

In response to the GOP demand for "personal accounts," Clinton floated an alternative system called Universal Savings Accounts, in which each American would receive an identical chunk of money from the government to be invested.

When Bush ran for president in 2000, advocating personal accounts, he specifically rejected the idea of government investing any funds earmarked for Social Security in the stock market. Instead, he laid out broad principles for a "carve-out" plan, such as saying current retirees and anyone over 55 would stay in the current system, that participation for younger workers would be voluntary and that the investment choices would be limited to a few broad-based investment options, such as stock and bond index funds.

Bush's Social Security agenda was sidetracked by the Sept. 11, 2001, attacks, but when he was reelected in 2004, he pushed forward with a version of a personal-account plan, declaring, "I earned capital in this campaign, political capital, and now I intend to spend it."

Under Bush's Personal Retirement Account (PRA) plan, the payroll-tax diversion was relatively small, starting out with a cap of $1,000 per year and eventually expanding to no more than one-third of payroll taxes. The investment options were modeled on the ones in the Thrift Savings Plan (TSP) for federal employees, with a bias toward "life cycle" plans that shift investments from stocks to bonds as a worker nears retirement. A key feature was that participation was voluntary; even people who chose the PRA option would not have been compelled to invest any of it in the stock market.

"TSP was our model for account administration, and TSP has a quasi-government entity managing account administration," said Keith Hennessy, director of the White House National Economic Council under Bush. "It is true that our PRAs would have allowed you to take on (limited) investment risk, but that's a different meaning than 'giving the Social Security trust fund to Wall Street.' That's an absurd and patently false claim."

Gene Sperling, who was director of the National Economic Council under Bill Clinton, suggested The Fact Checker was being nitpicky about Hillary Clinton's language. " 'Wall Street' was clearly her shorthand for the fundamental conflict between Republicans and Democrats over whether to carve out personal accounts from payroll taxes that now are dedicated to the Social Security trust funds," he said. "I don't think anyone watching had any question what she was talking about."

In any case, for all the effort Bush put into crafting and promoting his concept, it went nowhere. Bush could not even get a committee vote on his idea, even though Republicans controlled both houses of Congress, as Republicans were wary of embracing a concept under furious assault by Democrats.

We realize that Clinton was speaking off the cuff at a televised forum, but her language on this issue is still very sloppy.

The GOP's "whole plan" was not to put Social Security's trust funds into the stock market. It was designed as a voluntary program, in which individuals could choose to direct a relatively small portion of their payroll taxes to investment options besides Treasury securities. Ironically, it was Clinton's husband who actually had proposed to invest money earmarked for Social Security in the stock market.

Shorthand or not, there is also little excuse for referring to the Bush plan as privatization.