The Glamor of Evil 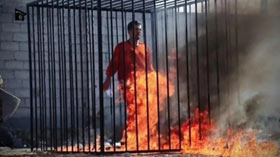 On Tuesday the Islamic State released a 22-minute video showing Flight Lieutenant Muath al-Kasasbeh of the Royal Jordanian Air Force being doused in petrol and burned to death. It is an horrific way to die, and Flt Lt al-Kasasbeh showed uncommon bravery, standing stiff and dignified as the flames consumed him. And then he toppled, and the ISIS cameras rolled on, until what was left was charred and shapeless and unrecognizable as human.

King Abdullah's response to this barbaric act was to execute two ISIS prisoners the following morning, including the evil woman who was part of the cell that blew up the lobby of my favorite hotel in Amman, the Grand Hyatt.

President Obama's response was to go to the National Prayer Breakfast and condescendingly advise us - as if it's some dazzlingly original observation rather than the lamest faculty-lounge relativist bromide - to "remember that during the Crusades and the Inquisition,people committed terrible deeds in the name of Christ".

Gee, thanks. If you're watching on ISIS premium cable, I'm sure that's a great consolation when they're reaching for the scimitar and readying you for your close-up. Oh, and, even by the standards of his usual rote cookie-cutter shoulder-to-shoulder shtick that follows every ISIS beheading of western captives, the President could barely conceal his boredom at having to discuss the immolation of Flt Lt al-Kasasbeh:

Aaand it, I think, will redouble [pause] the vigilance aaand determination on the part of our global coalition to, uh, make sure that they are degraded and ultimately defeated. Ummmm. [Adopting a whimsical look] It also just indicates the degree to which whatever ideology they're operating off of, it's bankrupt. [Suppressing a smirk, pivoting to a much more important subject.] We're here to talk about how to make people healthier and make their lives better.

The lack of passion - the bloodlessness - of Obama's reaction to atrocity is always striking. He can't even be bothered pretending that he means it.

I am not a great fan of the Hashemites, and there is great peril for Jordan in getting sucked deeper into a spiral that could quickly consume one of the weakest polities in the region and turn the least-worst Sunni monarchy into merely the latest Obama-era failed-state - after Iraq, Syria, Libya, Yemen, etc. The UAE took advantage of Flt Lt al-Kasasbeh's capture to cease participation in sorties entirely, and, given the general halfheartedness of Obama's "coalition", King Abdullah could have been forgiven for also deciding to head for the exit.

Yet he understood the necessity of action. Obama, by contrast, declares action, and then does nothing. His war against ISIS was supposed to be one in which the US would not put "boots on the ground", but instead leave that to our allies. The allies have the boots, but they could use some weapons, too. Obama has failed to supply the Kurds or anybody else with what they need to defeat our enemies. It's becoming what they call a pattern of behavior. Elliott Abrams draws attention to this passage in a New York Times story about Ukraine:

The Russians have sent modern T-80 tanks, whose armor cannot be penetrated by Ukraine's aging and largely inoperative antitank weapons, along with Grad rockets and other heavy weapons. Russian forces have also used electronic jamming equipment to interfere with the Ukrainians' communications….

Hmm. So how much of that shopping list have we responded to? Obama won't write Ukraine a blank check, but he will write them a blanket check:

The $16.4 million in aid that Mr. Kerry will announce in Kiev is intended to help people trapped by the fighting in Donetsk and Luhansk. The aid will be used to buy basic items like blankets and clothing, along with counseling for traumatized civilians.

Could be worse. He might have thrown in another James Taylor singalong. Then they really would need trauma counselors.

With at least another two years of civilizational retreat to go, we're gonna need a lot more security blankets, which is good news for whichever Chinese factory makes them.

~As Kyle Smith points out, the video of Flt Lt al-Kasasbeh's death is an extremely sophisticated and professional production. US news media have declined to run it, because it's too disturbing, as opposed to, say, Brian Williams' ripping yarns of derring-do about being shot out of the sky by an RPG. There are really two parallel media structures now: Consumers of Brian Williams-delivered "news" aren't even aware of the metastasizing of evil. Meanwhile, out there on Twitter and Facebook it's the hottest recruiting tool on the planet. You'll recall Hannah Arendt's tired and misleading coinage "the banality of evil", derived from her observation of Adolf Eichmann at his trial in Jerusalem. As I wrote last August:

Hitler felt obliged to be somewhat coy about just how final the final solution was. As Eichmann testified at his trial, when typing up the minutes of the Wannsee conference, "How shall I put it? Certain over-plain talk and jargon expressions had to be rendered into office language by me." Even the Nazis were reluctant to spell it out.

The Germans didn't have social media, but they had newsreels, and Hitler knew enough not to make genocide available to Pathé or "The March of Time". He had considerations both domestic and foreign. Pre-Wannsee, in Poland and elsewhere, German troops had been ordered to shoot Jewish prisoners in cold blood, and their commanders reported back to Berlin that too many soldiers had found it sickening and demoralizing. So the purpose of "the final solution" was to make mass murder painless, at least for the perpetrators - more bureaucratic, removed, bloodless.

As for foreign considerations, Germany expected to be treated as a civilized power by its enemies, and that would not have been possible had they been boasting about genocide.

Seventy years on, the Islamic State has slipped free of even these minimal constraints. They advertize their barbarism to the world, because what's the downside? Let's say the guys who burned Flt Lt al-Kasasbeh are one day captured by Americans. They can look forward to a decade or two of a soft, pampering sojourn in the US justice system, represented by an A-list dream-team that'll string things along until the administration figures it'll cut its losses and ship them to Qatar in exchange for some worthless deserter.

As for the upside, "the banality of evil" may have its appeal for lower-middle-class Teuton bureaucrats, but the glamor of evil is a far more potent and universal brand. The Islamic State has come up with the ultimate social-media campaign: evil goes viral! At some level German conscripts needed to believe they were honorable soldiers in an honorable cause, no different from the British or Americans. But ISIS volunteers are signing up explicitly for the war crimes. The Islamic State burned Flt Lt al-Kasasbeh alive not only to kill him but to inspire the thousands of ISIS fanbois around the globe, like Moussa Coulibaly, the guy who stabbed three French policemen outside a Jewish school in Nice this week.

For many of its beneficiaries, modern western life is bland, undemanding and vaguely unsatisfying. Some seek a greater cause, and turn to climate change or LGBTQWERTY rights. But others want something with a little more red meat to it. Jihad is primal in a way that the stodgy multiculti relativist mush peddled by Obama isn't. And what the Islamic State is offering is Jihad 2.0, cranking up the blood-lust and rape and sex slavery and head-chopping and depravity in ways that make Osama-era al-Qaeda look like a bunch of pantywaists.

Success breeds success. The success of evil breeds darker evil. And the glamorization of evil breeds ever more of those "recent Muslim converts" and "lone wolves" and "self-radicalized extremists" in the news. That's a Big Idea - a bigger idea, indeed, than Communism or Nazism. Islam, as we know, means "submission". But Xtreme-Sports Hyper-Islam, blood-soaked and baying, is also wonderfully liberating, offering the chance for dull-witted, repressed young men to slip free of even the most basic societal restraints. And, when the charms of the open road in Headchoppistan wear thin, your British and Canadian and Australian and European welfare checks will still be waiting for you on the doormat back home.

By contrast, civilization is a fragile and unnatural state of affairs. Droning on about the Crusades and Jim Crow, Obama offers the foreign policy of Oscar Wilde's cynic: He knows the price of everything and the value of nothing. And so, as the world burns, he, uh, redoubles his, uh, vigilance, uh uh uh... Whatever. That and $16.4 million will buy you coffee and some trauma counseling in Kiev.