The Horror of ISIS and the Generational Apathy 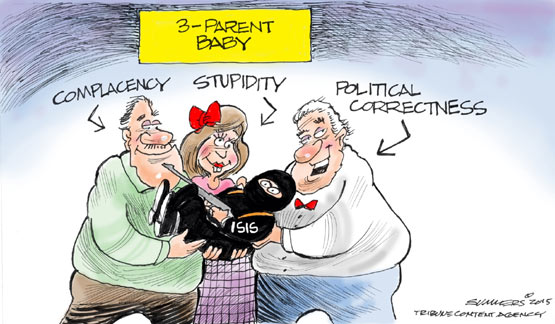 After the Islamic State barbarians released the video of the captured Jordanian pilot being burnt alive inside a steel cage, the civilized world reeled in horror. But it's sheer hypocrisy to think that the horrific images of the Islamic State (ISIL/ISIS) beheadings, torture and burning will have any significant impact on the young adult generation which has been desensitized by a bloodthirsty hedonistic culture for decades. Movies and even television programs no longer try to hide any gruesome images from its viewers who demand realistic graphics in gory stories. With YouTube becoming the go-to source for ISIS beheadings, even networks are reluctantly reporting the horror albeit with warnings to viewers of graphic material to follow.

The millennials and younger are more interested in texting and any new innovational enhancement for their social media lives. How is it even possible to reach this jaded horde with the seriousness of current events when our Commander in Chief refuses to acknowledge that ISIS is even a threat to our National Security? Someone asked the question, "What will Obama do if an American pilot is captured and burned alive?" It's doubtful he would react like the King of Jordan who immediately executed two ISIS terrorists in Jordanian custody. Obama is still denying that ISIS is in any way connected with Islam or is a threat to our national security.

At the National Prayer Breakfast, Obama said, 'People committed terrible deeds in the name of Christ.' The flaw in this argument is that there is nothing in the teaching of Christ that advocates the slaughter of innocents but there is in the Koran. Radical or moderate Muslims can find such actions sanctioned in that book when dealing with infidels. While the violent words in the Koran limit these actions to a time of war, it has become a rationale of the jihadists to claim that we are in a war and thus this justifies the beheadings and other horrors. Conversely, Jesus Christ teaches his disciples "Whoever does not receive you, nor heed your words, as you go out of that house or that city, shake the dust off your feet." Apparently President Obama does not see that this is quite a difference in theology. Not that he knows much about history when he uses the Inquisition as an example of terrible things that happened in the name of Christ.

In the Dark Ages there were many types of Inquisitions, one from the Catholic Church but most were from the State. The religious Inquisitions were created to provide heretics and the accused the right to a trial to prove their innocence whereas those by the State summarily executed those accused.

We've had Gen X and Gen Y and the youngest group of potential voters which has been dubbed the Millenials. Since my six adult children belong to all these assemblages, I've made sure they are not insensitive to human misery but I am well aware that they and their peers have been exposed to the very worst that humans do to one another either through their entertainment choices or through current events. Decades ago, these young Americans were eagerly renting the video of Faces of Death, a gruesome collection of the most bizarre and grisly death scenes ever recorded, from executions, assassinations and mass murder to suicide, disease and disasters. Today's popular movies and television programs are about zombies, aliens, murderous villains committing their acts in graphic detail, the more horrific the better and the audience cheers. What horrors we see today.

No doubt, the ISIS murderers have been weaned on such images and have become truly desensitized to human suffering.

Our culture as promoted by progressives is atheistic, nihilistic and increasingly amoral. Our entertainment choices are limited to those whose lead characters insist there is no God. Frankly, I'm rather tired of hearing such verbiage from actors portraying their characters as super smart and true believers as morons. The latest entry to this cynical, negativistic horde is the Fox's Lieutenant Backstrom who compares all religion to cults that bleed the gullible of their money and the worst one appears to be Roman Catholicism. He snidely suggests that the Sistine Chapel should be regarded in the same category as what televangelists get from simpleton viewers.

Bill Maher is another purveyor of atheist cant who always fails to acknowledge exactly how Judeo-Christians have benefitted society. How many hospitals, schools, hospices, universities, nursing homes, health services, have been built by cults? All these religious based benefits are available to all including atheists. The Judeo-Christians are more law-abiding, are more likely to be patriotic and willing to die for their country.

They are also more likely to respect and revere life as important unlike the Islamic State. My husband and I raised our children to do the same. If we as a nation want our children to be outraged by despicable acts against humanity, we should recognize the value of belief in a higher power instead of belittling it.