Collins and Romney hold the keys in the impeachment trial. Here's what they signaled on Day One 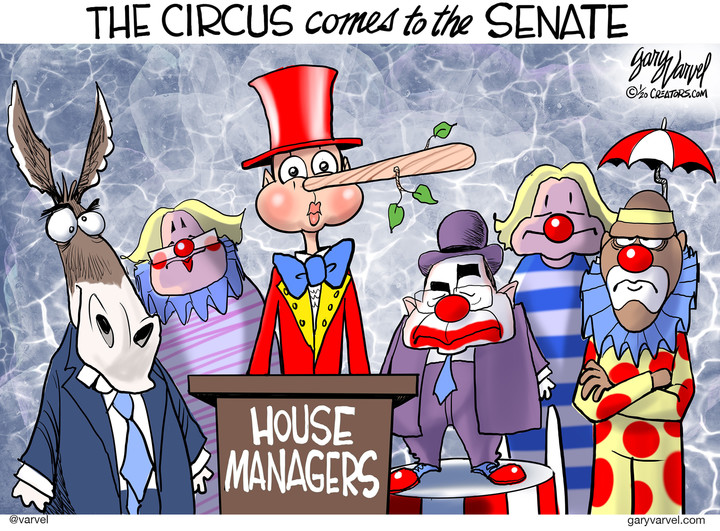 Eyes will be glued to the Senate floor over the next two weeks as the Senate formally conducts its impeachment trial of President Donald Trump. The process got off the ground Tuesday as the two sides debated the rules.

But in actuality, much if it is window-dressing. The most significant stuff is what's happening off the Senate floor - particularly when it comes to potential GOP swing votes like Sens. Susan Collins of Maine and Mitt Romney of Utah. They hold the keys to new evidence that could actually change hardened views of Trump's actions with regard to Ukraine, and their words and actions are what matter most.

And a couple of significant things happened in that regard Tuesday.

One was a change to the rules that were initially proposed by Senate Majority Leader Mitch McConnell, R-Ky. The change brought the rules more in line with how they were during Bill Clinton's impeachment trial, and they were reportedly changed at the urging of Collins and others.

One rule change made it so evidence compiled by the House would automatically be included in the record, subject to objections by Trump's legal team, whereas before the Senate had to approve that. The other is that the 24 hours of opening arguments that have been allotted to each side will take place over three days each, rather than two each. Both of these are changes that Democrats wanted, and they apparently got some Republicans to side with them - enough to force McConnell to preemptively change the rules, just as the proceedings were beginning.

Democrats might be encouraged by that for a few reasons. One is that it reinforces the fact that McConnell wasn't actually going with the complete Clinton rules and erred in Trump's direction on a couple of things. It suggests that McConnell either wasn't aware of these objections or that they materialized later in the process, which seems on its surface to be an unforced error.

Another is that it appears Collins is actually doing some things behind the scenes - at least by outward appearances - and also that she may have some allies. The Washington Post's reporting indicates that Sen. Rob Portman, R-Ohio, was also involved, though he hasn't often been mentioned alongside potential GOP swing votes on issues like this. As for Collins, she certainly hasn't been willing to go as far as Democrats want in pushing for witnesses such as former Trump national security adviser John Bolton.

A skeptic, though, might suggest there is less than meets the eye here. Collins has a clear interest in the appearance of pushing things toward a more neutral approach, and this is arguably a somewhat minor shift in how the trial was going to be handled. Perhaps this allows her to say that she pushed back on her leadership, even as she doesn't plan to rock the boat on much-bigger matters. Votes on witnesses such as Bolton and on new evidence from witnesses such as Lev Parnas (evidence of which Collins has sounded dismissive) will surely be the biggest matters in which her swing vote will matter.


The second significant thing that happened Tuesday was what Romney said about how Democrats were handling the process. In an interview with CNN's Manu Raju, he downplayed the changes that Collins and Co. had forced. "The changes are pretty modest and I don't think are significant in any way," Romney said.

Perhaps more importantly, though, Romney suggested Democrats' complaints about the rules and the process were over-the-top.

"I think the Democrats make a mistake when they claim outrage time and time again," Romney said. "If everything is a outrage, then nothing is an outrage."

The comments came shortly after Senate Minority Leader Chuck Schumer, D-N.Y., said in an NPR interview, when asked about Romney supporting McConnell's rules, "He either hasn't read it or he's gone along with this coverup, which I hope that isn't true."

Romney is on the hot seat right now, and Democrats have to engage in a delicate dance when it comes to wooing him. They can go all-out with a high-pressure campaign and denounce anything he votes with Republicans on as part of a "coverup," but that might alienate Romney. Why would he come to the middle if he feels like it's never going to be good enough for Democrats? Romney is the one Republican to say pretty clearly that he will likely vote for Bolton to testify, which would be a big get for Democrats - potentially the biggest get, short of a vote to remove Trump from office - yet Schumer still suggests Romney might be involved in covering Trump's backside.

It seems like a little bit of a brushback pitch from Romney, who doesn't have a reelection campaign or a moderate electorate back home (Collins does) that might force his hand.

In other words, after Tuesday, there's a mixed bag when it comes to real signs from the likes of Collins and Romney. One thing's for sure, though: It's worth keeping tabs on them.