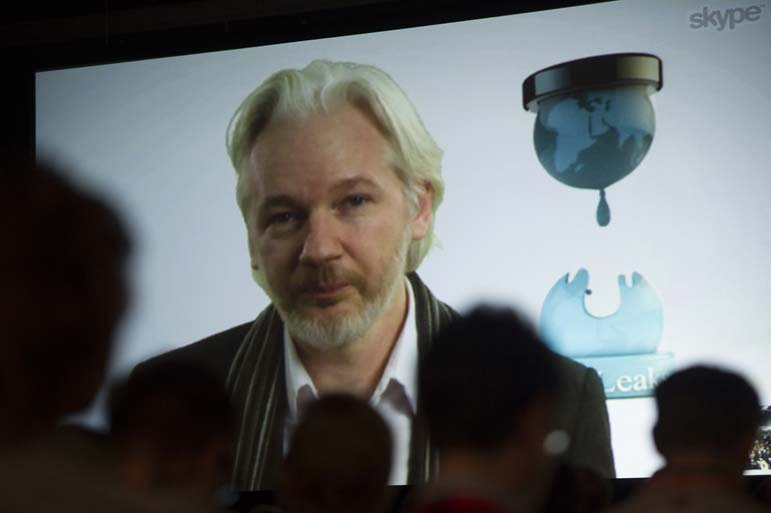 In news reports, WikiLeaks is sometimes described as a "radical transparency organization" or other similar formulations. But in light of a document that the organization distributed to news outlets, it may be time to strike "transparency" from the characterization.

"Confidential legal communication. Not for publication," warned the document, which went on to list 140 "false and defamatory" statements about WikiLeaks founder Julian Assange. The message to media outlets: Write about Assange at your own risk. You are on notice.

You are on notice, that is, that Assange's and Wikileaks' legal acumen is fraying. "It is false and defamatory to deny that Julian Assange is the sole founder of WikiLeaks," notes one of the line items. Saying that Assange collaborated with others, after all, is an unforgivable slander that will be punished in a court of law! That line about Assange being THE SOLE FOUNDER of WikiLeaks appeared in the original list of better-watch-out statements about Assange - a list that has since been pared back significantly, according to journalist Emma Best:

"#WikiLeaks deleted this in v1.3, which they posted shortly after I leaked the version that was email outed, and after someone made a #HarryPotter joke. #Assange must be sensitive about that," she tweeted Monday. She followed up with: "OMFG #WikiLeaks retracted the line about it being defamatory to say #Assange stinks. It's absent from the version they leaked in response to my copy, which they actually emailed out."

Correct: The initial list contained the provision that "it is false and defamatory to suggest that Julian Assange stinks." Such admonition doesn't just arise out of some abstract concern that someday, someone might allege that the WikiLeaks founder doesn't smell too good. Look at this piece from The Times of London last year, with the headline "WhiffyLeaks: Assange told to take a shower": "Julian Assange's poor hygiene has played a role in the latest agitations by Ecuador to extricate him from his five-year standoff in its embassy, a well-placed source has told The Times." Assange has resided under asylum since 2012 in the Ecuadorian embassy in London.

More hygiene-related coverage emerged last October, in reaction to a leaked memo regarding Assange's living conditions at the embassy. "Leaked memo: No internet until you clean your bathroom, Ecuador told Julian Assange," noted one account. Wording in more establishment media outlets, such as The New York Times, was more cautious. "The policies were laid out in a nine-page memo that was published by a news site this month. (They include directives to clean his bathroom and look after his cat.)," noted a Times story on a suit by Assange against Ecuador over the living conditions.

Reports on Assange's personal habits stretch back for years and were a component of a book by former WikiLeaks spokesman Daniel Domscheit-Berg - "Inside WikiLeaks: My Time with Julian Assange at the World's Most Dangerous Website." Those reports have apparently upset Assange enough to include the no-stink provision in the original threat email.

Actually, there's nothing false or defamatory about saying that Assange stinks. Or that the Erik Wemple Blog stinks. Or that President Donald Trump stinks. Or that Jane Doe or John Doe stinks. We can do this in America, thanks to our laws. "It's highly unlikely saying someone 'stinks' is defamatory," notes Clay Calvert, a University of Florida professor frequently cited in this space. "There's no objective, factual measure of what constitutes good or bad hygiene or when someone smells bad. It's merely a person's opinion that someone smells bad." Opinions are amply protected under First Amendment law.

Which means that there's no way to put Assange to the smell test. Let's use Assange's own standards as a guide. According to this new email, "There is a pervasive climate of inaccurate claims about WikiLeaks and Julian Assange, including purposeful fabrications planted in large and otherwise 'reputable' media outlets. Consequently journalists and publishers have a clear responsibility to carefully fact-check from primary sources and to consult the following list to ensure they are not spreading, and have not spread, defamatory falsehoods about WikiLeaks or Julian Assange."

Getting a whiff of Assange may be a bit easier than determining whether he met with former Trump campaign chairman Paul Manafort during the presidential race, as The Guardian reported. That story has not been matched by competing outlets, and the Assange warning email contains this entry: "It is false and defamatory to suggest that Julian Assange has ever met or communicated with Paul Manafort." And surely Manafort knew from media reports to keep his distance from this fellow.