What we learned about Warren 2020 this weekend 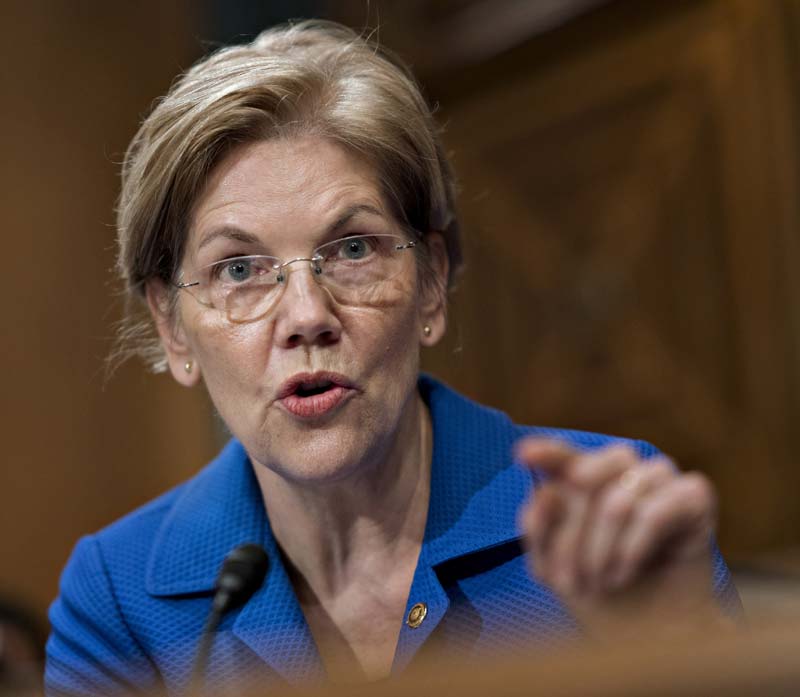 They would have denounced "survival crime."

DES MOINES, Iowa - By the end of her first full day of campaigning in Iowa, Sen. Elizabeth Warren had spoken to around 2,700 people. She'd taken 30 questions from voters, chosen by a random, ticket-based lottery. She'd stopped for three short media scrums, evaded one heckler and battled one cold ("too much time with little people!"), the waking nightmare of any presidential candidate.

The first visit to a primary state by a top-tier Democratic presidential candidate found a candidate still honing her stump speech, with a well-oiled campaign infrastructure and audiences that were still in the tire-kicking phase. It revealed plenty about how Warren, who has been urged to run for president since at least 2013, would approach a real campaign. The caricature of Warren - by mid-December, she was being covered as a flawed and stumbling liberal who had missed her best shot to run for president - did not survive intact. Here's what replaced it.

In 2016, as the primaries were winding down, Warren began attacking Trump on Twitter, branding him a "xenophobic bully" as he fired back with attacks on her claim of Native American heritage. At the time, Democrats insisted that the senator was cracking a code. "She's showing that the best way to respond is to punch back hard and to call him out," former President Barack Obama spokesman Tommy Vietor told The New York Times.

But Trump won the election, and his insults ever since have been perceived, by the press, as masterful distractions that no Democrat can effectively rebut. Since her DNA test, Warren has simply stopped responding to Trump's insults; over four Iowa events, she mentioned the president's name only once, when asked about the aforementioned test, saying that she simply could not stop him from "hurling racial slurs."

Trump has become the silence between the notes of Warren's speeches, which portray an economic system that has been rigged, for decades, to favor the wealthy. When Warren talks about the fights she's been through, she focuses on the "million dollars a day" that bank lobbyists spent, unsuccessfully, to stop the creation of the financial-industry regulatory agency she proposed and initially ran, and on her evisceration of former Wells Fargo CEO John Stumpf, which was a factor in his resignation. It's a return to the rhetoric that worked so well for her in 2012, affirming her status as an icon of the left.

Warren also emphasized her lower-profile Senate work to demonstrate that she was more than a left-wing candidate. In Sioux City, she talked about her effort to pass legislation lowering the price of hearing aids.

• She is not Bernie Sanders

Plenty of the Democrats who wanted to draft Warren into the 2016 race went on to support the independent senator from Vermont; a good number of those strategists, activists and voters now support him even with Warren in the race. But Warren's approach to campaigning could not be more different. The Sanders approach, which has not changed in decades, is to sketch out a social democratic vision of America - universal health care, free public college tuition, a $15 minimum wage - in sentences punctuated by applause. He mentions his biography only to talk about how he proved skeptics wrong as mayor of Burlington, Vermont. Voters who show up to hear Sanders hear "the message," and then they decide whether they're in.

Warren's stump speech begins with "a little bit about who I am," with a story that quiets down the crowd: about the night she heard her mother muttering, "We will NOT lose this house" as she contemplated how to deal with her father's medical bills. She moves on to a vision of "changing the rules" of three sectors of society: the economy, government and politics.

In that litany, anti-corruption legislation is filed under government; voting rights, including a constitutional amendment to enshrine the right to vote, is filed under politics. It's more incremental than the Sanders approach, but it grows out of a rationale for running, the sort of thing Democrats believe Hillary Clinton never was able to do. Warren, who has been accused of elitism (by Republicans) since entering politics, connects every policy position to her identity and the years she spent (to use a phrase she's dropped) on "the ragged edge of the middle class."

Warren is one of five senators with presidential ambitions who has co-sponsored the Medicare for All Act; she is also the first of them to announce a campaign or exploratory committee. Yet at her first four events, the senator from Massachussets did not mention the legislation at all. Only in Des Moines did she say something that emphasized her support for universal care: "Health care is a human right."

After the Sioux City event, I asked Warren whether there was a reason she wasn't mentioning the Medicare-for-all idea in the stump speech. "No, no special reason," she said. "No one's raised it. But I have had a chance to talk about Medicaid. Partly because I think we've had a national conversation about health care, and I think it's been enormously valuable. It's obviously about how we protect ourselves and each other. But it's also about our values. I hope we continue to have that conversation. I will continue to talk about health care every chance I get."


Contrast that with Sanders, who never lets a speech end without talking up Medicare for all. Contrast it with what the bill's other sponsors might do when they get to Iowa and work to distinguish themselves.

She has a fan base, and she takes care of it. At every Warren stop, but especially in Des Moines, it was easy to spot merchandise and tokens of support that predated her trip to Iowa. Shirts reading "Nevertheless, she persisted," references to the 2017 moment when Senate Majority Leader Mitch McConnell prevented Warren from negatively referring to Attorney General-designate Jeff Sessions, were everywhere.

A 2014 "Run, Warren, Run," sign, printed by MoveOn, was unfolded in Storm Lake. A shirt from the Progressive Change Campaign Committee's 2012 ad campaign, "I'm from the Elizabeth Warren Wing of the Democratic Party," was visible at three of the stops. In Council Bluffs, a Teamster named Bob Payne briefly pulled Warren aside to ask whether she'd gotten a shirt he'd sent her office, to advertise a pension reform bill the union supported.

"I got it, and I wore it!" Warren said, hugging Payne - who called her "my hero" for working on pensions.

It was also easy to find Democrats who had wanted Warren to run before and were still shopping for a candidate but had an emotional connection to her.

"From the moment of 'nevertheless, she persisted,' I got the mug on my desk," said Julie Brown, a 55-year-old businesswoman who brought her daughter to see Warren in Des Moines. "I've got a pen that says it. It was a rallying call for women, in particular. When you live that, when this happens to you on a daily basis, and you have a strong wonderful woman who shuts it down - it's very inspiring."

A lot of that could change as candidates pile into the race, but Warren's campaign, at the moment, is taking full advantage of the pent-up interest. At every stop, she has stopped to take pictures with anyone willing to wait for one; her team has grabbed copies of her books (or even photographs and baseballs, which sometimes are passed around by autograph hunters) and returned them to voters, signed. It's more like the approach Clinton's campaign took in 2016, and Sen. Cory Booker's pre-campaign is taking now, than what fans of Sanders found last cycle.

Both Booker, D-N.J., and Sanders, of course, had been to Iowa more recently than Warren had. Both, if they run, will get their chance to introduce themselves to voters who don't see a clear favorite right now. But Warren's visit, coming after a long stretch of skeptical coverage, set a higher bar than many expected.