Front Row at the Madhouse 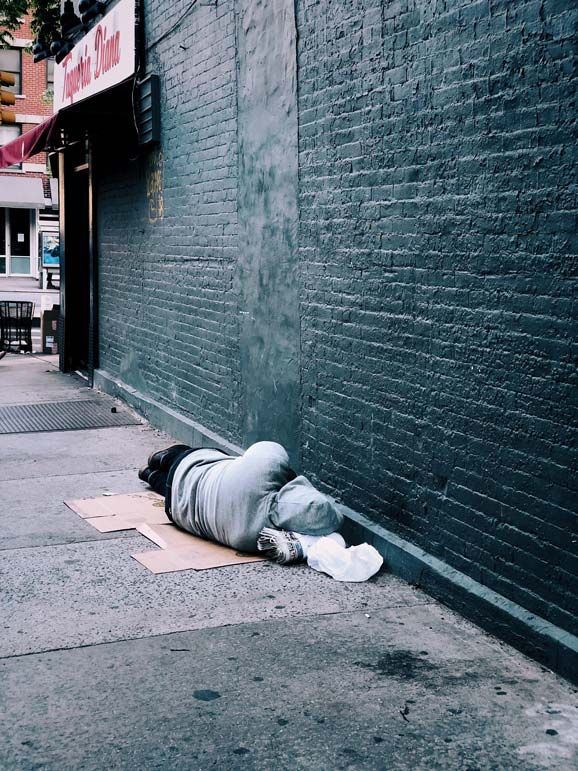 Ray Domanico: My morning's brief commute on the Lexington Avenue subway to Grand Central was punctuated by the sudden appearance of a madman thrashing about, speaking in tongues, and spewing bodily fluids in his path. The riders between me and him rushed past me, or tried to, to get to the far end of the car. He tackled one young man and threw him to the bench. Others were caught up in his fury as well. I took a few of his hits to my chest, though the blessing of a winter coat dulled the blows. Finally, his end of the car emptied, and all passengers were packed tightly in the other end, some standing on benches to keep an eye on what was going on.

He sat there, blathering in unintelligible grunts, moaning and yelling. He appeared to be in some physical distress, clutching his gut. Then the wait began. As a matter of course, the train stops "due to congestion up ahead" as it nears Grand Central. When it moves, it does so slowly. Today, that pause felt longer than ever, with 75 or so regular people just trying to get to work, school, or home and hoping that the train would move into the station and open its doors. The situation probably lasted no more than three or four minutes, but it seemed much longer.

I had not been scared during the pushing and tackling phase, but now other thoughts crept into my head. Just this week, a man ran into a seafood restaurant in Brooklyn and bludgeoned three men with a hammer, killing one. The attacker was reportedly responding to voices that he heard. Multiple knife attacks have occurred in recent months, committed by the seriously mentally ill. I tried to avoid looking at the fellow on the train.

At last, the doors opened at Grand Central. Some people quickly exited, some moved to the next car, and others stood around on the platform to see what would happen. The man sat alone in the now-empty car. Crowd-control agents on the platform assured us that police were on the way. Then the man got off and staggered around the platform, trying to pull down his tattered pants and squat. Two policewomen arrived and handled him effectively, restraining him while assuring him that he was not in trouble and wouldn't be going to jail. The train moved on.

No system of values, religious or otherwise, would consider it compassionate to allow people like this fellow to roam the streets and subways, a danger to himself and to others. But Mayor Bill de Blasio seems unmoved. He touts his mental-health policy as a model, but it does nothing for the seriously mentally ill, while directing resources to those suffering from comparatively minor stress. People on the 5 train this morning were suffering from some of that stress, but they don't need counseling; they need responsive leadership from City Hall.

Rafael Mangual: I nearly vomited on my way to work today. I don't have stomach flu, and I wasn't hungover. What did I see? My walk to the subway takes me down a stretch of East 124th street, which is lined, daily, with human urine and excrement. I usually manage by holding my breath as I walk at a brisk pace, averting my eyes from the sights. Sometimes, I'll walk along East 125th street, which has fewer recessed doorways serving as ad hoc toilets.

As I turned onto the avenue, I watched a seemingly homeless man, naked from the waist down, stumble toward what looked to be a breakfast cart. Typical stuff, these days. But as I got closer to the subway steps, I saw that he was reaching for a pile of newspapers. He wasn't intrigued by the cover story. Somewhere in the vicinity was a pile of diarrhea on the ground; the rest of it was packed between the man's buttocks. The sight sent me into a frantic jog down the subway steps, dry-heaving behind my leather gloves.

The scent of stale urine in the station, bad as it was, made for an improvement. I composed myself and made my way to the subway platform for a train toward the more civilized world of midtown. Unfortunately, it would be nine minutes before the "express train" arrived. When it came, the car was particularly crowded at one end, thanks to the homeless man sleeping it off across four or five seats while filling the noses of the other passengers with the smell of sweaty feet.

At least the ride was quiet. Half the time, I ride the subway to a soundtrack of expletive-ridden rap music blasted from some passenger's Bluetooth speaker. The sort of person who plays music like this is daring someone to say something, as bullies do. Should I say something? What's the point? The guy blasting a song whose refrain is "what these bitches want from a nigga?" isn't looking to have a reasonable discussion that ends with him apologizing for his antisocial behavior.


And it's not just the morning commute. Any walk within the confines of the 25th precinct, where I live, is unpleasant. The sidewalks are covered with litter, despite the presence of trashcans on every corner. During the warmer months, fights between teenagers regularly break out. It's hard to enjoy a stroll here when there's a good chance of stepping in excrement or some vagrant's vomit. Not to mention the aggressive beggars and nodding addicts who look as if they're about to fall over, but never do.

A growing number of New York City neighborhoods are beginning to decay before our eyes, yet those in charge show no interest in doing anything about it. In some cases, city officials seem to be doing the opposite of what one would expect. Even though citizens are voicing their concerns about the state of public order in the high-traffic public spaces of East Harlem, no police are posted there. The MTA needs more funds for track and signal repairs, yet the city has made it official policy to allow fare-beating.

The de Blasio administration's lack of concern about public order in my neighborhood, and others like it, sends the wrong message to both the law-abiding and lawbreaking public: "Anything goes." If people can regularly get away with defecating in public, they might think they can also get away with robbery, groping, and assault. Eventually, those who can afford it will move out to nicer neighborhoods, leaving already-vulnerable areas to fall further into decline. In New York, we've lived this story before.

Ray Domanico is the director of education policy and Rafael A. Mangual is a fellow and deputy director of legal policy, both at the Manhattan Institute for Policy Research. They wrote this for City Journal.