Another victory is looming for McConnell 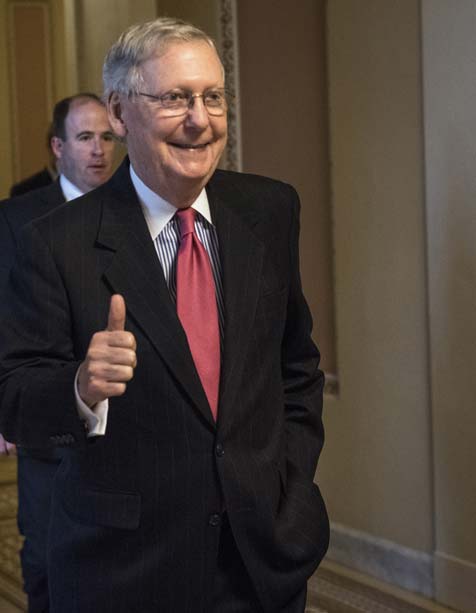 As reported by The Washington Post's Seung Min Kim and Paul Kane last week, and confirmed to me by Sens. Todd Young, R-Ind., and Tom Cotton, R-Ark., Senate Republicans are very close to changing the body's rules governing the amount of time the Senate can debate a nomination. Doing so will mark another important victory for Majority Leader Mitch McConnell, R-Ky.


At present, any single senator can deny unanimous consent to limit the time of 30 hours per nomination. And that's what Democrats did throughout 2017 and 2018, slow-walking every nomination. Republicans tried in vain to reach a compromise with Democrats that would reinstate the rules on time allocation that were adopted in a bipartisan fashion during the 2013-2014 Senate term. Because then-Majority Leader Harry Reid, D-Nev., invoked the so-called nuclear option in 2013 to change the rules of the Senate to allow for simple majority confirmations of all nominees except those to the Supreme Court, the precedent Reid set wasn't just about the number of votes necessary to advise and consent to nominations. It was about the number of senators needed to change a rule of the Senate. Since Reid went "nuclear," a majority is now sufficient to alter Senate procedure.


Republicans used this precedent, the "Reid Rule" conservatives like to call it to remind folks of its origin, to end the filibuster for Supreme Court nominees when Minority Leader Charles Schumer, D-N.Y., led a filibuster against the nomination of Neil Gorsuch. Thus, Judges Gorsuch and Brett Kavanaugh became Justices Gorsuch and Kavanaugh with simple majority votes. It can truly be said that Reid set in motion the events that led to the new Supreme Court center-right majority.


Now, McConnell is set to ask the Senate to change the time limits for debate. With 53 Republicans and a vast array of vacancies in the executive and judicial branches to fill, McConnell is expected to prevail on his caucus and the new rules on the amount of debate to enter into effect very quickly. Thus, the pace of nominations acted on - for or against - will accelerate dramatically. Gone will be the days when a superb nominee such as Charles Stimson of the Heritage Foundation didn't get a vote on his nomination to become the Navy's general counsel because more pressing nominations had to come first and time ran out on the last Congress. The crippling of the Trump administration's appointment process and the blockade on judicial vacancies with majority support is about to end.


Good. That is as it should be.


The Senate was never intended to "advise and consent" via supermajorities but via majorities. It is a majoritarian body now with regards to nominees, as it was in 1789 when the institution was created. The Democratic minority has irresponsibly chosen to slow-walk all nominations, and so the majority leader is going to act as the last Democratic majority leader did: McConnell is going to break a nominations logjam, and do so via simple majority vote. Because he has a majority of the Senate behind him, it is fitting and proper that he do so. Sauce for the goose and all that.


It is also good politics - no, great politics. The governing coalition between President Trump and the traditional Republican Party is cemented together by two primary issues: judges and defense spending (this is a marker for seriousness on national security.)


If the president or the Senate's Republican majority fails to deliver on either, the coalition cracks, and probably crumbles in 2020. (Alarmingly, Trump recently caved to Sen. Dianne Feinstein and did not renominate three Ninth Circuit appeals court nominees that the California Democrat had opposed. One hopes he won't repeat that capitulation to the Senate minority, as it telegraphs weakness and vulnerability to pressure judicial nominees.)


So the always canny McConnell gave the Democrats two years of rope to hang themselves with, and they have done so. Many more conservative judges and other crucial executive branch confirmations will come under the new Senate debate rules. McConnell has proved himself a "master of the Senate" before. Next week he will prove himself so again.