Trump's re-election chances may be better than you think 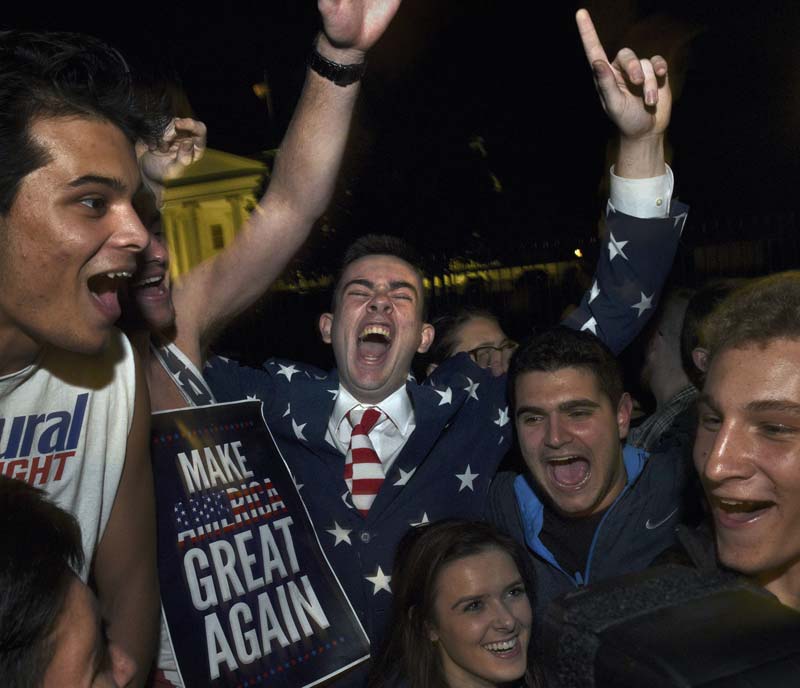 What are chances for re-election in 2020?

If history is any guide, pretty good.

In early 1994, approval rating after two years in office hovered around a dismal 40 percent. The first midterm elections of the Clinton presidency were an utter disaster.

A new generation of younger, more conservative led by firebrand and his "Contract with America" gave a majority in the for the first time in 40 years. also picked up eight seats in 1994 to take majority control of both houses of .

It was no wonder that thought the 1996 presidential election would be a Republican shoo-in. But nominated 73-year-old leader , a sober but otherwise uninspired fixture.

By September of 1996, "comeback kid" Clinton had a Gallup approval rating of 60 percent. Dole was crushed in an landslide.

was given a similarly dismal prognosis after the 2010 midterms, when lost 63 House seats and six seats. regained majority control of the House, though clung to a narrow majority in the . At the time, Obama had an approval rating in the mid-40s.


once again figured Obama would be a one-term president. Yet they nominated a Dole-like candidate in the 2012 election. Republican nominee had little appeal to conservative base and was easily caricatured by the left as an out-of-touch elite.

By late 2012, Obama's approval rating was consistently at or above 50 percent, and he wound up easily beating Romney.

What is the significance of these rebound stories for Trump, who had a better first midterm result than either Clinton or Obama and similarly low approval ratings?

Presidents run for re-election against real opponents, not public perceptions. For all the media hype, voters often pick the lesser of two evils, not their ideals of a perfect candidate.

We have no idea what the economy or the world abroad will be like in 2020. And no one knows what the country will think of the newly Democrat-controlled in two years.

The public has been hearing a lot from radical new House representatives such as (D-N.Y.) and (D-Mich.). Their pledges to deliver "Medicare for All," to phase out fossil fuels and to abolish the Immigration and Customs Enforcement Service are occasionally delivered with snark. Tlaib recently used profanity to punctuate her desire to see Trump impeached.

But much of the public supports Trump's agenda of deregulation, increased oil and gas production, getting tough with on trade, and stopping illegal immigration.

What if the impeach Trump, even knowing that a Republican would never convict him?

When did that to , his approval rating went up. Some Republican senators even joined the in the effort to acquit Clinton. As a reward for the drawn-out drama around the impeachment, lost seats in both the 1998 and 2000 House elections.


We still don't have any idea whom the will nominate to run against Trump. Will they go the 1996 or 2012 Republican route with a predictable has-been such as , who will turn 78 shortly after the 2020 election?

Well-known candidates from the such as in 1984, Dole in 1996, in 2004, in 2008 and in 2016 have a poor recent track record in recent presidential elections. They are usually nominated only by process of elimination and the calling in of political chits rather than due to grassroots zeal.

can continue their hard-left drift and nominate socialist , or they can try again to elect the first female president, either or , both of whom represent the far left.

But going to extremes did not work well in 1972, when leftist Democratic Sen. was crushed by incumbent . The learned that lesson earlier when they nominated Sen. in 1964 and were wiped out.

Whether or not they like Trump, millions of voters still think the president is all that stands between them and socialism, radical cultural transformation and social chaos.

Many would prefer Trump's sometimes-over-the-top tweets and hard bark to the circus they saw at the Brett Kavanaugh nomination hearings, the rantings of Ocasio-Cortez, or the endless attempts to remove Trump from office.

If Trump avoids both, perhaps a majority of voters will see him as political chemotherapy -- occasionally nausea-inducing but still necessary and largely effective -- to stop a toxic and metastasizing political cancer.