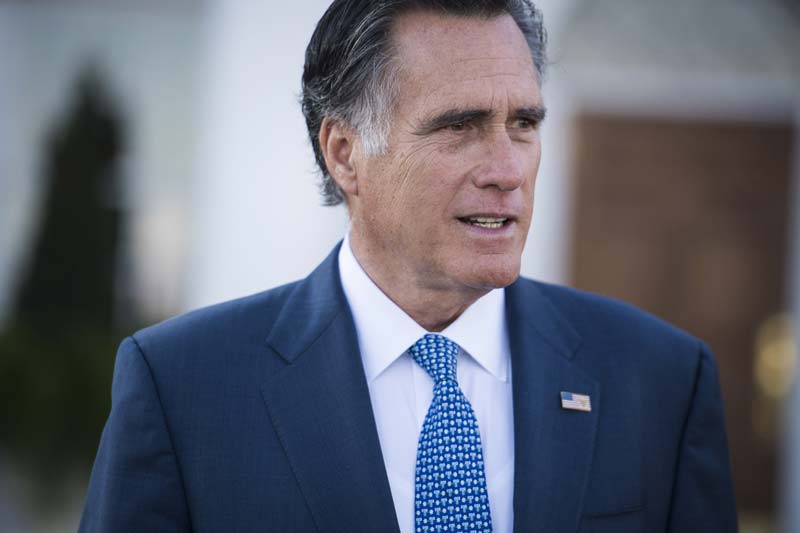 Mitt Romney's scathing critique of President Donald Trump has reignited a simmering feud between the two men, casting the incoming junior senator from Utah as the president's highest-profile Republican foil and stoking talk of Trump's vulnerability to a challenger for the party's 2020 nomination.

Trump's allies, including Romney's niece, Republican National Committee chair Ronna McDaniel, were quick on Wednesday to criticize Romney and seek to minimize him. Sen. Rand Paul, R-Ky., and others fanned out in media appearances and on Twitter in a show of force, knocking Romney as an awkward relic of the GOP past and reiterating their support for Trump.

Paul ridiculed Romney as someone "running around saying, 'I'm holier than thou, look at me.' "

Trump, meanwhile, was somewhat restrained, following counsel from his aides to shrug off Romney's salvo.

"I wish Mitt could be more of a team player," Trump told reporters at a Cabinet meeting.

But Romney's friends and leading anti-Trump conservatives were glad to see him herald his arrival in Washington by writing a cutting op-ed piece in The Washington Post that said the president "has not risen to the mantle of the office." The move was taken as a gesture of solidarity at a time of mounting anxiety among establishment Republicans.

"It gives permission for people to consider things and discuss things that were almost taboo before this, in terms of a challenger to Trump," said William Kristol, a conservative commentator. "It's a permission slip to have a real conversation about 2020."

"It begins," former White House chief strategist Stephen Bannon wrote in an email to The Post, referring to what he sees as Romney allies' efforts to block Trump from the 2020 Republican nomination.

Speaking Wednesday afternoon to CNN's Jake Tapper, Romney said he is not planning to run in 2020 but is "going to see what the alternatives are."

Many mainstream Republicans are increasingly alarmed by Trump's behavior and willing to battle with him in ways that would have seemed strained two years ago, when Trump had the party tightly in his grip after his stunning victory and its members largely fell into lockstep behind him.

Two years later, Trump's presidency is under siege following Republican losses in the 2018 elections. An ongoing government shutdown, volatile financial markets, the special counsel probe, right-wing discontent over Trump's failure to secure funding for a border wall, and empowered House Democrats all loom before the president, who has been isolated and lashing out at his critics. The collision of threats has frayed the bonds between Trump and some top Republicans even as the president retains strong support in polls of party voters.

In addition, some Republican leaders have been rattled by the departure of Jim Mattis as secretary of defense in the wake of Trump's decision to end the U.S. military operation in Syria, along with the exit of White House chief of staff John Kelly. Both generals were seen as steadying presences.

Enter Romney, 71, who has decided to lay down a marker underscoring those concerns with far more national political capital on hand than most Republicans. While others have spoken out - including some departing senators - they have often struggled to capture the party's attention during crises in Trump's first two years in office.

Romney, as the party's 2012 presidential nominee, a former Massachusetts governor and business executive with a powerful financial network, brings a new stature to the anti-Trump bloc of the party that has been missing as Republicans in Washington have operated in a bargaining fashion with Trump, enduring his slights and erratic actions to push through favored policy items.

"In matters that relate to the divisiveness of our political environment, I'll speak out if I feel the need to, if there's something significant, and I think it's important as I begin this new job to make it very clear where I stand," Romney said on CNN, adding that he backs the president's attempt to secure funding for a border wall but feels compelled to criticize him on issues ranging from Trump's comments on race and women to the "abrupt" way he believes the president is conducting U.S. foreign policy.

Romney, however, was greeted with a burst of skepticism among both Republicans and Democrats, who pointed to his history of flip-flopping on his view of Trump, which has veered from uneasy embrace of his presidential endorsement (2012) to stern rebuke (2016) to accepting his endorsement again for his Utah Senate race (2018) to this latest rebuke (2019).

"I endorsed him and he thanked me profusely," Trump reminded reporters on Wednesday.

The image of a smiling Romney sitting with Trump over a dish of frog legs at a white-tablecloth dinner in late 2016 was being widely circulated by Romney critics as a reminder of his past ingratiation, in that instance as he considered joining Trump's Cabinet as secretary of state. Trump aides say the president never came close to tapping him.

Those rebuttals are unlikely to quiet Romney or similarly minded Republicans. The notion of Trump's presidency being in "deep descent" has become a near-daily discussion throughout the broader Republican establishment in recent weeks, according to more than a dozen consultants and lawmakers involved in those conversations.

Once-fanciful suggestions about organizing a draft campaign for Romney or Nikki Haley, Trump's former U.S. ambassador to the United Nations, have suddenly turned more serious, the consultants and lawmakers said.

"Everyone is trying to figure out what the party looks like if Trump ends the year looking extremely weak or maybe [Vice President Mike] Pence is president," said one veteran Republican financier who spoke on the condition of anonymity to discuss private exchanges.

Despite his past denunciations, Romney's move took some of his associates by surprise. For weeks, Romney has been tight-lipped as he prepares to be sworn in on Thursday, disappointing those who had hoped he would emerge as a new power center for what is left of mainstream Republicans in Trump's Washington.

Still, some Romney allies, such as his former adviser Mike Murphy, have been talking up a 2020 run for months without Romney's involvement, hoping to stoke interest and lay the political groundwork for him should Trump be impeached or resign.

"Trump seemed like a bumbling incompetent in many ways, so what's the opposite of that - who is a comfortable Republican, super-confident, safe, no drama choice? It's Mitt," Murphy said last year.

Spencer Zwick, the political adviser who built Romney's donor network for his presidential campaigns, routinely takes calls from donors urging Romney to look hard at 2020, according to two people familiar with those discussions who spoke on the condition of anonymity.

Regardless of Romney's political future, there remains a void in the GOP for figures like him to have more of a say over the direction of the party as Trump continues to buck dogma on trade and national security,Democrats take control of the House and dozens of Democratic presidential hopefuls begin traveling to early voting states and tear into Trump's character and record.

The absence of the late senator John McCain, R-Ariz., coupled with the retirements of GOP senators Bob Corker, Tenn., and Jeff Flake, Ariz., has only intensified the angst among Republicans who see Trump as unbound by criticism from within the party.

Unlike Romney, the departing senators have not ruled out challenging Trump. Flake has repeatedly said he is considering a 2020 run. Corker said last month, "I haven't ruled it out," and suggested that Trump might not run for reelection. A 2016 Trump foe, outgoing Ohio Gov. John Kasich, already has traveled to early voting states and publicly left his options open.

But Trump has cultivated intense support among many Republican base voters, making any primary run against him difficult, and imperiling Romney's own path forward in both the Senate and, potentially, the 2020 primaries.

"Messrs. Romney, Flake, and Kasich will continue chasing their fantasy of being president, even if that means destroying our party and denying President Trump reelection," Jevon O.A. Williams, an RNC member, wrote in an email late Tuesday to fellow party leaders, urging them to change the party's rules to make any primary challenge a burden.

Beyond Washington, flickers of data are being passed around by Trump critics as manna for their cause, such as a poll last month of Iowa Republicans by the Des Moines Register and CNN. That poll showed about 63 percent of Iowa Republicans would welcome the chance to consider challengers to Trump in Iowa, home to the first contest of the 2020 nominating race.

In that same poll, however, Trump holds an 81 percent approval rating among Iowa Republicans, making clear their continued support for the president.

In New Hampshire, the first primary state and where challengers to sitting presidents have historically gained traction, there is a fierce debate about whether the state party should endorse Trump and curb the chances of a primary fight. Republican Gov. Chris Sununu, a Trump ally, has said he sides with the Republicans who want to protect the state's tradition of having the party stay away from endorsing.

Kasich, who spent months campaigning in New Hampshire ahead of the 2016 primary, where he placed second a distant second to Trump, has been frank about that political reality and the uphill climb any Trump challenger would face.

"I don't get into things that I don't think I can win," he said last month at an event in Ohio. "Right now, today, inside the Republican Party, I can't beat him in a primary."

Yet on Twitter and in phone calls late Tuesday and Wednesday across the Republican Party, Romney's op-ed piece sparked new talk of an uprising.

Of course, it was an op-ed piece, not a showdown on the Senate floor. And Romney, an imperfect messenger, was typically careful in his choice of words. But it was something for anti-Trump Republicans to seize on and hope that months of grousing and discussions could eventually yield a viable challenge to an incumbent they loathe.

"For now at least Mitt Romney has become the leader of the Republican Resistance to Trump," Kristol wrote.