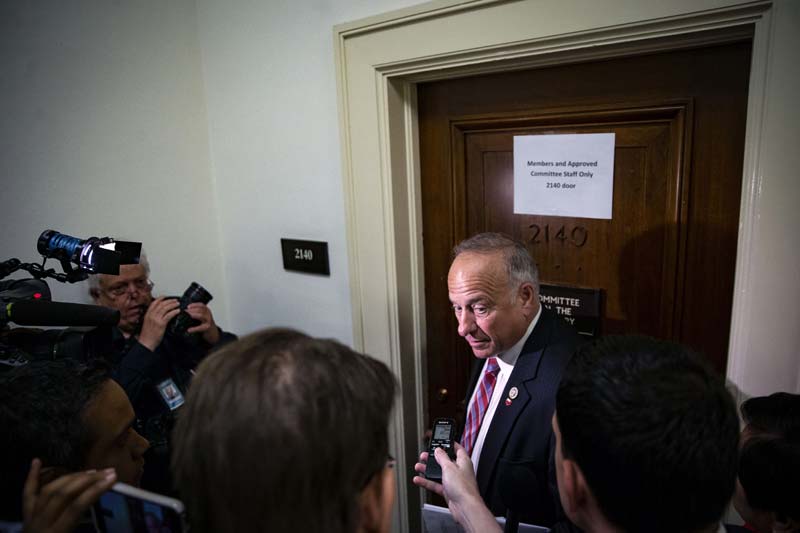 WASHINGTON - House Democratic leaders blocked an effort to censure Rep. Steve King, R-Iowa, for racial comments, referring the measure to the House Ethics Committee for further review due to concerns that it might set a dangerous precedent for policing members' speech.

Censure is the most serious sanction for a House member short of expulsion, and it has been imposed only six times in the past 100 years. Prompted by King's recent comments to the New York Times questioning the offensiveness of the terms "white nationalism" and "white supremacy," the House adopted a resolution condemning that hatred Tuesday.

But Rep. Bobby Rush, D-Ill., sought to go further by censuring King and pressed for a vote on Wednesday. After the House clerk read the resolution detailing King's inflammatory comments over the years, House Majority Leader Steny Hoyer, D-Md., moved to refer the matter to the Ethics Committee - a step that could bottle up the effort indefinitely.

The House agreed on a voice vote.

"I think we have spoken, and we have spoken on both sides of the aisle, that this is unacceptable rhetoric and behavior," Hoyer said beforehand, referring to Tuesday's disapproval measure.


Democratic leaders had feared that a censure of King could open Democrats to Republican retaliation.

Speaking earlier on Wednesday, House Majority Whip James Clyburn, D-S.C., who introduced the disapproval resolution, noted that King made his statements to the news media, not during House proceedings.

"I don't know that it's a good thing for us to talk about censure for things that are done outside of the business of the House of Representatives," said Clyburn, the highest-ranking African American congressional leader. "We should be very, very careful about doing anything that constrains, or seems to constrain, speech."

By doing so, you "open the window for anybody to attack speech, no matter if it's Democrats or Republicans," he added in a subsequent interview.

Hoyer also told reporters Tuesday he was concerned that censuring King might touch off a partisan tit-for-tat, but he also left open the possibility that he might vote for such a measure. Clyburn, too, said he would probably vote for a censure based on his personal views while opposing a vote based on his perspective as a House leader.

Rush on Wednesday declared himself "terribly disappointed" and called Clyburn's disapproval resolution "almost meaningless" and the result of "a lot of political hanky-panky."

But Rush said he didn't want to "put the caucus in a position where they had to vote against the speaker" by forcing a vote on censure. He said he had effectively put Rush on notice: "If in fact Steve King utters one more type of racist commentary, then I reserve the right bring it up out of the Ethics Committee" and force a vote.

King was not present on the House floor Wednesday evening as a House clerk read through a litany of his offensive comments through the years, including a remark referring to illegal immigrants with "calves the size of cantaloupes" from smuggling drugs across the Mexican border. He did not speak to reporters who asked him about the censure attempt.

Besides the disapproval resolution passed Tuesday, King has also suffered the loss of his committee assignments, including senior posts on the Agriculture and Judiciary panels, after Republican leaders voted Monday not to seat him as punishment for his remarks. He also faces a 2020 primary challenge from a prominent state senator in his district, and several Iowa newspapers have called on him to resign in editorials.

Asked whether a censure measure could have passed the House, Clyburn said, "Oh, yeah, it would pass."

Censure of King might have at least some bipartisan support. A separate censure resolution introduced by Rep. Tim Ryan, D-Ohio, was co-sponsored by GOP members David Joyce of Ohio and Elise Stefanik of New York.

King said his comments to the Times - "White nationalist, white supremacist, Western civilization - how did that language become offensive?" - were taken out of context. But he has not denied saying those words.

He was defiant in an interview with a conservative talk radio host Tuesday night, criticizing the Republican leaders who moved to sanction him and declaring that he would not resign: "What are they gonna do next? After they get done telling me to resign, they'll realize that's not going to happen."

Conservative commentators and a handful of GOP lawmakers have pointed to Democratic utterances that they think are worthy of opprobrium similar to that directed at King. Some have pointed at the recorded comments of freshman Rep. Rashida Tlaib of Michigan about President Donald Trump, pledging to "impeach the motherf-----" at a private event this month.

Since the modern House Ethics committee was formed in 1967, five lawmakers have been censured - each of them after extensive investigations by that panel. None of those instances involved a matter of offensive speech but instead dealt with various forms of official misconduct, ranging from financial misdeeds to sexual affairs with House pages.

Ryan's measure was also referred to the panel. "It is his hope that the Ethics Committee will not only look into Rep. King's comments, but also his history of hateful rhetoric," said spokesman Michael Zetts.