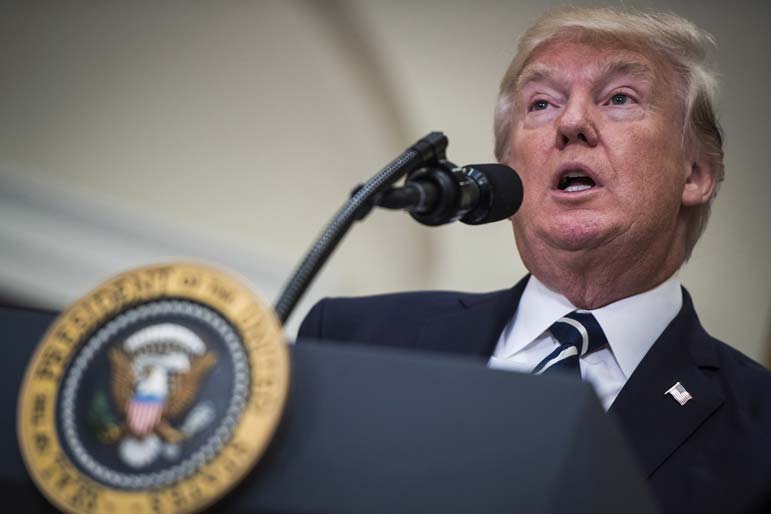 In recent weeks, a narrative has gained traction in Washington questioning whether Donald Trump is capable of being the president.

Michael Wolff's gossip-filled book portrayed Trump as a "child," a "dope" and an "idiot" incapable of processing basic information or having a substantive conversation with his advisers. Despite Wolff's credibility issues, the story line has had an impact: A Post-ABC News poll found that 47 percent of Americans now question Trump's mental fitness.

So this week, I asked CIA Director Mike Pompeo, who personally briefs the president almost every day, to take us inside how Trump receives his most highly classified briefing: the president's daily brief, or PDB.

"We present the president with the most exquisite information any policymaker would ever have the privilege of having a chance to read," Pompeo said during a conversation at the American Enterprise Institute. "The president asks hard questions. He's deeply engaged. We'll have rambunctious back and forth, all aimed at making sure we're delivering him the truth as best we understand it. He'll ask questions from time to time that we frankly don't have the answer to. ... We'll go back and, within a couple of hours, deliver that information as best we can."

Pompeo offered some declassified examples from the PDB of instances in which the president was dissatisfied with the intelligence presented and pushed for better information that improved a policy outcome.

The first, Pompeo said, related to "the humanitarian issues taking place in Yemen, the risk of cholera and starvation. He kept pushing us about what was really taking place on hand. What was the real layout? What was happening in the port? What was possible given the configuration of forces on the ground? And he pushed us ... (for) three days until we were able to deliver him a satisfactory picture where he then could make a decision about which of our friends to call to try and make sure that that problem was at least diminished or mitigated."

The second example had to do with Venezuela. "The president was dissatisfied with the description of the situation as we had laid it out for him," Pompeo said. "It was some financial issues he wanted more clarity on: Who had the money, where was the debt, what was the timing of that? There were multiple pieces. The array of (Venezuelan President NicolĂˇs) Maduro and his forces - he wanted to really understand how they all came together so he could have a complete picture. And it wasn't long thereafter that the ... first or second set of sanctions that the administration put in place were enabled by the very intelligence that we had delivered and he had requested."

This is a very different picture of Trump's national security leadership than many in Washington imagine. It is also very different from his immediate predecessor. During his first term, President Barack Obama attended his daily meeting to discuss the PDB less than half the time. Before Trump's inauguration, it seemed as though he would follow the Obama model. At the time, he told Fox News' Chris Wallace that he planned to skip the PDB most days because "I don't have to be told the same thing in the same words every single day for the next eight years."

But during his first year in office, Trump has reversed course. "It's not daily, but it's near daily," Pompeo says. When the president travels, a CIA briefer travels with him to deliver the daily intelligence briefing.

Is Trump a sophisticated consumer of intelligence? "I have seen 25-year intelligence professionals receive briefings. I would tell you that President Trump is the kind of recipient of our information at the same level that they are," Pompeo said. "We'll be sitting in a National Security Council meeting talking about a particular topic, and he'll bring up something that I briefed him on weeks or months ago. ... He's using it. He's taking it on board, and I'm confident that our team is delivering in a way that's delivering value to the president."

Unlike many of Trump's nominees, Pompeo had bipartisan support for his confirmation because he is considered a straight shooter. Sen. Dianne Feinstein, D-Calif., a former chairwoman of the Senate Intelligence Committee, praised Pompeo because "he provided straightforward answers to my questions," while the committee's current ranking Democrat, Sen. Mark Warner of Virginia, expressed confidence in Pompeo's independence, declaring "he will accurately represent the unvarnished views of (CIA) analysts ... no matter what the president or others may want to hear."

In other words, based on Pompeo's assurances, Americans worried about the president's ability to carry out his duties can rest easy.