Dems need to do their job and make a deal 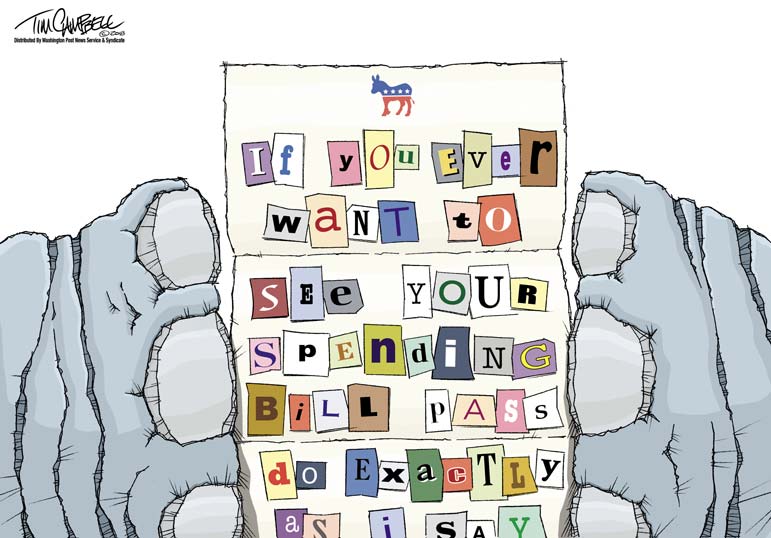 It's been more than a week since word leaked of President's Donald Trump's "s-hole countries" comment, but instead of moving past it and returning to the negotiating table, Democrats continue to milk Trump's comments - posturing for the cameras to condemn his "ignorance and bigotry," while threating to shut down the government if Trump does not immediately codify Deferred Action for Childhood Arrivals as part of a short-term government funding bill.

This is a manufactured crisis. DACA protections don't begin expiring until March 5, so there is plenty of time to cut an immigration deal. However, the short-term funding bill before Congress includes a six-year reauthorization of the Children's Health Insurance Program to provide health care for poor children. So if Democrats shut down the government in a fit of pique over what Trump reportedly said, nothing will happen to the "dreamers," but poor children will lose their health insurance.

We have a historic opportunity to make progress on illegal immigration. But to do so, Democrats need to stop behaving like a bunch of oversensitive millennials. The Oval Office isn't a safe space, and politics doesn't come with trigger warnings. This isn't a college debate. Real lives are at stake.

Trump isn't going to change. And the fact is, we've had plenty of presidents who said worse things than Trump and yet did extraordinary things. Lyndon B. Johnson used the n-word in the Oval Office to refer to black Americans and voted against every civil rights bill that had ever come to a vote in his first 20 years in Congress. Yet he became, in the words of his biographer Robert Caro, "the greatest champion that black Americans . . . had in the White House" since Abraham Lincoln, signing the 1964 Civil Rights Act and the Voting Rights Act of 1965.

Richard Nixon railed against blacks and Jews in his White House tapes. Yet as vice president he shepherded the first civil rights legislation through Congress (a bill that Johnson, then Senate majority leader, watered down, telling southern senators, "I'm on your side, not theirs"). And as president, Nixon desegregated southern schools, increased funding for black colleges, and signed the Voting Rights Act Amendments of 1970 and the Equal Employment Opportunity Act of 1972.

Now Trump has offered to negotiate immigration reform that will change the lives of millions living in the shadows. Democrats should quit fulminating and start negotiating. The elements of an immigration deal are obvious:

Give it to him. Unless Democrats believe in open borders, there is nothing philosophically wrong with a wall. The only reason Democrats oppose the wall is because Trump wants it. They need to decide: Is denying Trump his wall worth giving up the chance to secure permanent legal status for millions of people?

Second, Democrats need to agree to other reforms Trump is demanding, most of which enjoy bipartisan support, such as ending the visa lottery system and instituting a merit-based immigration system.

Finally, Trump must, in return, agree to legalize not just the "dreamers" but also the vast majority of the 11 million illegal immigrants who have not committed crimes. He has said repeatedly that he is willing to do so. During the 2016 campaign, he made clear that while the "bad ones" had to go, he wanted to find a way for the good ones to get legal status, by allowing them to leave and then return in an "expedited" fashion. "I actually have a big heart. Something that nobody knows," he said. Just last week he reaffirmed this, telling Durbin he was willing to "take the heat off both the Democrats and the Republicans" and pass comprehensive immigration reform.

Democrats would be crazy to pass up such an offer. But they can't begin negotiating such an immigration deal with Trump while at the same time threatening government shutdowns and publicly calling him "vile and racist." Trump has indicated he is willing to sign legislation that would give legal status to 11 million illegal immigrants. If Democrats want to help those people, then they need to quit the theatrics and start doing their jobs.