With All Due Respect 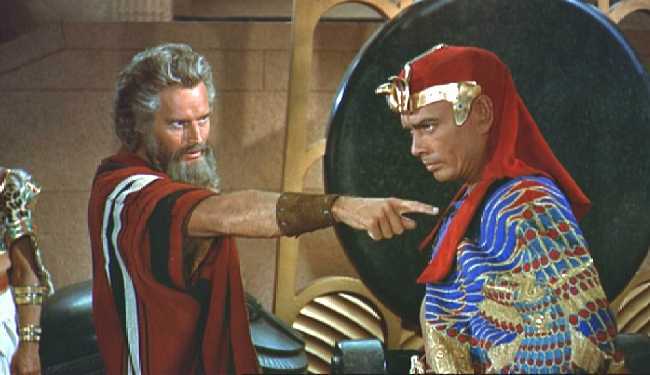 In the terse verse of the ancient Exodus story is a profound message for moderns about crime, punishment --- and redemption. Not regarding the suffering of the biblical Hebrews, but their nemesis, Pharaoh.

A brilliant scholar painstakingly reveals it.

Translated from the original Hebrew

Pharaoh’s honor had been decimated — his land ravaged, his ego trampled and humiliated. Would it really have made a difference had Moses not treated him with the dignity befitting a king?

Even a wicked ruler like Pharaoh deserved to be treated with the respect due a king. It was a lesson taught to us by Moses himself.

In this week's Torah reading, we find Moses furious, and with good reason. He stood facing a stubborn king who would not listen to reason, and so Moses turned and stalked out of the royal palace “with burning anger” (Exodus 11:8).

“Burning anger”? What kindled such rage in the humblest of hearts?

Pharaoh had reached the end of his endurance, yet even after the Plague of Darkness, he still found the strength to set limits on the permission he was granting the Israelites: “Only your flocks and your cattle shall be left here.” Hadn’t Pharaoh gotten the message that Redemption is not subject to restrictions? Had he forgotten the destruction that had run rampant in his land for nearly a year, when he said scornfully to Moses, “Leave me! No more shall you see my face, for the day you see my face you shall die!”?

Pharaoh had thrown down the gauntlet, and Moses picked it up. As a goodbye present, he delivered the Divine’s promise of one more plague: the Plague of the Firstborn. Before stalking out of the palace, he described the scream that would arise from all over Egypt at midnight, when all their firstborn would die in a single moment. His parting shot was: “And all these servants of yours will come down to me and prostrate themselves before me, saying, ‘Go out, you and all your people…’ And after that I will go out.” And Moses left Pharaoh’s presence “with burning anger.”

It was Pharaoh’s political blindness and irrational stubbornness that so enraged Moses that he treated the ruler to a description of how this drama would end. But for some reason, Moses left out a central and important detail. The final chord of the Plague of the Firstborn was not as he described it to Pharaoh. Moses said to Pharaoh, “And all these servants of yours will come down to me and prostrate themselves before me,” whereas in fact, when the plague actually came, this is what happened:

“Pharaoh arose at night, he and all his servants and all of Egypt, and there was a great outcry in Egypt… and he called to Moses and Aharon at night and said, ‘Arise, go out from among my people…’ ”

That is to say, it was not only Pharaoh’s servants who came and pleaded with Moses and Aaron to leave their stricken and humiliated land with the utmost haste. They were led by the king himself, who came and bowed before Moses’s will. So why did Moses omit this from his stinging prediction of things to come? Why did he only say that Pharaoh’s servants would be prostrating themselves and pleading before him to take his people away?

Here is the answer offered by foremost commentator, Rashi, to the question: “He was showing due respect to royalty, for in the end, Pharaoh himself came down to him in the night.”

In other words, as this difficult and drawn-out standoff is now coming to its climax, and Moses responds to Pharaoh’s threat with a fitting rejoinder, he nevertheless refrains from overstepping the bounds of due respect for royalty. Rather than tell the king the whole humiliating truth, that Pharaoh himself will be kowtowing and begging Moses to take the Jewish People out of his land immediately, he couches it in more respectful terms.

BUT WHY GIVE SUCH AN EVIL KING even that much respect? Because that was part of Moses’s mandate from the start. When the Divine first commanded Moses to go with his brother Aaron to Pharaoh and launch the campaign of forcing him to free the Hebrew slaves, “He commanded them concerning Pharaoh, king of Egypt” (Exodus 6:13). And there Rashi comments, “Concerning Pharaoh, king of Egypt — He enjoined him to speak to him with respect; this is the deeper meaning.”

In the broader context of the struggle between Moses and Pharaoh, this injunction seems peculiar. Wasn’t the entire campaign a rebellion against the king’s sovereignty, and, as such, an obvious affront to his honor? This man who viewed himself and was viewed by his people as a god was humiliated and put to shame by Moses through a series of Ten Plagues on his nation and his own person.

Think, for example, about the sheer humiliation during the Plague of Frogs: “And in you, and in your people, and in all your servants, frogs will come up.” Rashi says, “In you and in your people — they will enter into their innards and croak.” Try to imagine how Pharaoh looked, sitting on his throne surrounded by his ministers, with frogs croaking in his belly every time he opened his mouth to speak!

The great Pharaoh, god of the land, could do nothing against the Plagues that rocked his kingdom and his throne. This was such a disgrace and such an undermining of Pharaoh’s authority that the Divine telling Moses to be sure to treat the king with respect seems absurd. What difference does it make at this point, even to Pharaoh, whether Moses says “You will come and prostate yourself to me,” or “Your servants will come…”?

But the great teachers of mussar tell us that the Torah takes a different view: It’s a lesson in how punishment is meted out with extreme precision. Pharaoh was deserving of these punishments due to his many sins of rebellion. But to hear Moses saying “You will come down to me,” to disgrace him to that extent, he did not deserve, because despite his evil actions, he was still a king.

This is really a lesson in the Torah’s approach to the concept of punishment. The purpose of punishment is not to exact vengeance from the evildoer, but to educate and refine him. Its job is to attack the twisted thinking that has taken root in a person’s heart or a nation’s consciousness, and to correct it. Pharaoh believed that he had divine, superhuman powers. A self-concept like this distorts a person’s view of himself and his environment and drives him to do the worst kind of evil. (In recent times, Hitler and Stalin suffered from this kind of megalomania, and the results of their madness have left deep scars on the human race.)

The Plagues of Egypt were meant to knock the bottom out of this dangerous worldview. One by one, the Plagues destroyed every aspect of the Pharaoic philosophy and corrected the self-concept of the Egyptian people and their king, bringing home to them that they were human and nothing more, underscoring their powerlessness against the All-Powerful. The Plagues introduced the idea that all men are equal and no one has the right to abuse his fellow man or subjugate him, and that Bnei Yisrael in particular are not subject to any man.

However, Pharaoh was king of Egypt by right. Even as he and his nation were stricken by terrible plagues, the Divine wanted the king to know that his right to rule Egypt was not under attack, but rather the megalomania that caused him to oppress the Jewish People and drove him to unspeakable cruelty.

This is why Moses was cautioned from the very beginning to show Pharaoh that his honor as a human king was being preserved, and even before his crushing downfall, Moses made it clear to him that the Divine’s words were not directed at his royal status per se. Pharaoh’s servants would come and grovel before Moses; nothing was said about Pharaoh himself.

From this, the great mussar thinkers derived a lesson for themselves about the honor of every human being. Even if a person deserves a punishment or rebuke, every word must be weighed and measured with awareness of what is permissible and what is not.