Judge's ruling isn't going to save the 'Dreamers' 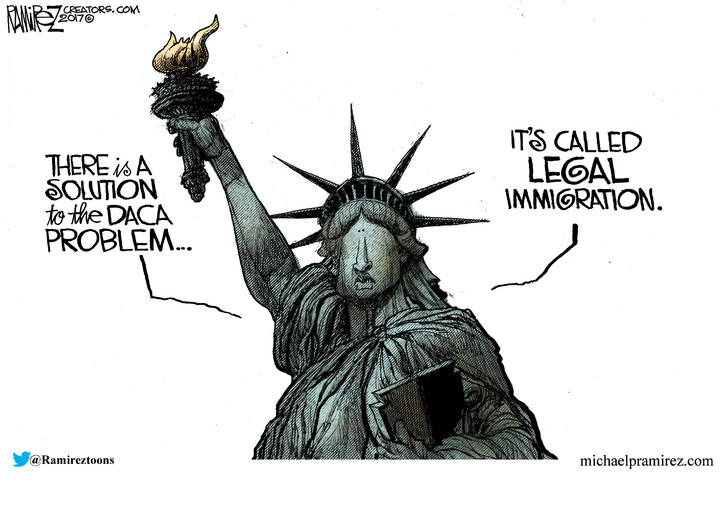 A federal judge in California on Tuesday blocked President Donald Trump from rescinding the Deferred Action for Childhood Arrivals program, which he had planned to phase out in March.

The impulse to protect the so-called Dreamers is admirable. But legally speaking, the opinion can't be correct.

District Judge William Alsup's ruling was based on a provision of the Administrative Procedure Act that says executive agency actions must not be arbitrary and capricious. The court held that it was arbitrary for Trump's Department of Homeland Security to rescind DACA. It reasoned that because DACA was legal, Homeland Security could not rescind it for being illegal.

This logic may sound plausible. But it runs into multiple legal problems.

The first has to do with applying the arbitrary and capricious standard to DACA in the first place. The Administrative Procedure Act functions so that the courts can supervise executive agencies and be sure their actions are based on reasoned policy logic. But the law makes an exception for any decision that is "committed to agency discretion by law."

The original DACA order was based on the president's discretionary authority to decide how to enforce federal immigration law. Recall that Dreamers have no statutory right to be in the country -- they are the children of undocumented immigrants. DACA was, formally speaking, an announced discretionary decision by the executive branch not to deport Dreamers.

The federal judge rejected this argument by saying that while the decision not to deport was indeed discretionary and not subject to review, the decision to deport was not discretionary in the same way. It added that there was further reason to review Homeland Security's move because DACA had invited Dreamers "out of the shadows" and reversing the program would subject them to consequences that would infringe on the liberty and property interests created by the original order.

There's something appealing about this argument. Certainly prosecuting or deporting someone is active in the way that deciding not to do so is not. Yet it's difficult to accept that once the government decides not to prosecute or deport someone, it must then justify the decision to change its mind. The asymmetry isn't especially consistent with general principles of administrative law.

The second significant legal problem with the California court's decision is its assertion that it was arbitrary and capricious for Homeland Security to rescind DACA.

The main basis the government gave for ending DACA was that it was illegal when Obama enacted in the first place -- it exceeded his constitutional authority. This was essentially the view taken by the federal district court in Texas that froze the Deferred Action for Parents of Americans plan that was DACA's twin sibling, allowing the undocumented parents of citizen children to stay in the country. The U.S. Court of Appeals for the 5th Circuit agreed. The U.S. Supreme Court split 4-4 on the issue after Justice Antonin Scalia's death and before Trump named Justice Neil Gorsuch to the court.

The federal district court in California disagreed. It said that DACA was legal in the first place, and that the Supreme Court never said otherwise. It concluded that ending DACA "was based on the flawed legal premise that the agency lacked authority to implement DACA." And it rejected the notion that it was up to the executive branch to decide whether to defend DACA in court, especially in the 5th Circuit where it is arguably illegal under the precedent of the DAPA program.

This analysis cannot be correct. One presidential administration is entitled to disagree with the legal analysis of another.

What's more, the president has the right to interpret the Constitution when it comes to the legality of his own actions. He doesn't have to wait for a court to tell him something is illegal. He can judge for himself.

And the legal judgment that DACA exceeds presidential authority certainly isn't arbitrary or capricious. A federal court of appeals and four Supreme Court justices have already said DAPA was. If it weren't for Scalia's death, it's highly probable that the majority of the justices would have taken that view. And it seems even more likely that Gorsuch would now provide the deciding fifth vote to say DACA is unconstitutional.

Trump's Department of Homeland Security can't have been acting arbitrarily because its judgment aligns with these authorities.

The California judge cited Trump's pro-DACA tweets as evidence that continuing the program serves the public interest. That's cute, but misleading. Trump is calling for congressional legislation to continue DACA, not for executive action.