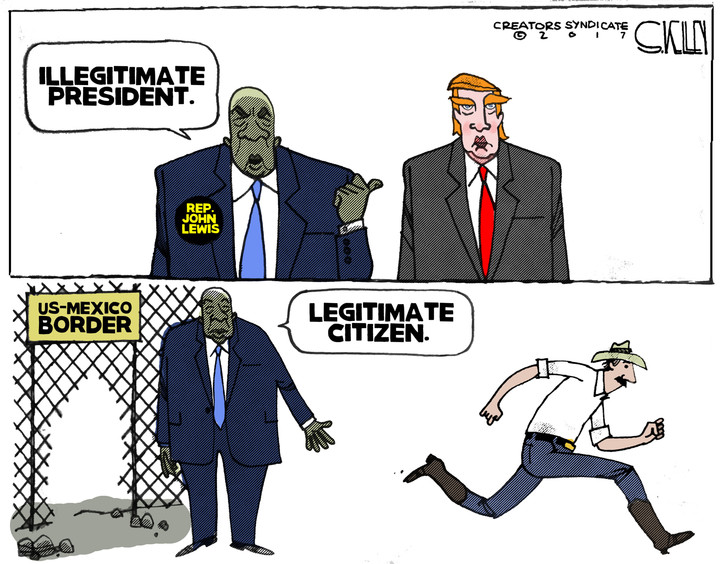 Once Donald Trump responded to John Lewis's "illegitimate president" attack, the question wasn't whether Trump's pushback would cause a Twitter furor. It would. The question was how many Democrats, beyond those who occupy the left-most wing of the House Democratic caucus with Lewis, would go along with the Trump-is-not-legitimate charge.

"I've got the utmost respect for Congressman Lewis," Manchin said. "He's an icon, if you will. And we all have the most respect for him. I just think that was uncalled for ... So for this type of rhetoric, it's non-productive. And I would like it if that would tone down a little bit, we'd be much better off and move on."

Longtime Obama adviser David Axelrod was just as clear. "I disagree with what @repjohnlewis said," Axelrod tweeted Saturday. "But I honor the man he is. Honesty; integrity; courage -- these are qualities you just can't buy."

Sen. Bernie Sanders, who mounted a long and bitter challenge to Hillary Clinton in the Democratic primaries, refused Sunday to call Trump illegitimate, suggesting instead that the argument is "just words."

"Do you think Donald Trump will be a legitimate president?" Sanders was asked on ABC.

"Well, I think he's going to be inaugurated this week," Sanders said, going on to call for an investigation into Russian hacking. "Does that make him illegitimate?"

"Those are just words," Sanders responded. Sanders described his job in the Senate now as holding Trump to his campaign promise not to cut social safety net programs. But illegitimate? Sanders wouldn't go there.

Denis McDonough, the outgoing Obama White House chief of staff, refused to commit the president to Lewis's position. "On Tuesday night in his speech, (Obama) called (Trump) the freely elected president of the United States," McDonough said on CNN Sunday.

McDonough added that Democratic concerns about Russia and hacking are "by no means trivial." And, like everyone else, he paid tribute to Lewis's history in the civil rights movement. But he wouldn't buy into the legitimacy argument.

"The president has made very clear that he believes that he is the freely elected president," McDonough answered. "He will be inaugurated on Friday. And he will come into office hopefully strengthened by the kind of transition that we have tried to run in this White House."

Tapper tried one more angle: Does Obama "think that Democrats should put this away, this whole idea of legitimate, illegitimate?"

"The president is not going to get in the middle of this right now," McDonough said.

Several Democrats -- a number nearing 20 by the most recent count -- have announced they will not attend Trump's inauguration. That doesn't necessarily mean they would explicitly say Trump is illegitimate. But some certainly would. Democratic Rep. Barbara Lee, for example, said early on that she is with Lewis. Another liberal, New York Rep. Jerry Nadler, tweeted, "I stand with @repjohnlewis."

Others, like California Rep. Ted Lieu, said they stood with Lewis but were not entirely clear on the question of Trump's legitimacy. In an extensive statement Saturday, Lieu said Trump has insulted too many people, is too close to Vladimir Putin, and has unconstitutional business conflicts of interest. Nevertheless, Lieu said, "I do not dispute that Trump won the Electoral College."

So does that make Trump illegitimate, or not? Lieu did not say.

Judging by the Democrats' reaction, it's one thing to denounce Trump's statements, to link him to Russia, and to suggest he will be a disastrous leader. It's another to claim that Trump is not a legitimate president. For some Democrats, the illegitimacy charge would move them a bit too close to a kind of birtherism that they spent years denouncing. (Remember that Republican leaders stayed away from birtherism, although some GOP members of Congress embraced, or at least flirted, with it.)

If anyone other than John Lewis were leading the legitimacy fight, even more Democrats might distance themselves from it. But Lewis is so widely revered for his actions 50 years ago -- even those denouncing him have to pay tribute to his past -- that he has given a sort of moral cover to a small number of Democrats who want to suggest that the 2016 election results are not legitimate. Right now, though, in the absence of some explosive new revelation or wholesale change in the political atmosphere, it appears that small number won't get much bigger.